Give Me A Break 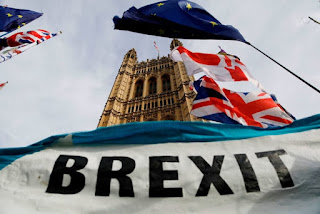 This morning, the divorce is official. The UK has left the European Union. And, Ian McEwan writes, it was all done with "magic dust":

The only certainty is that we’ll be asking ourselves questions for a very long time. Set aside for a moment Vote Leave’s lies, dodgy funding, Russian involvement or the toothless Electoral Commission. Consider instead the magic dust. How did a matter of such momentous constitutional, economic and cultural consequence come to be settled by a first-past-the-post vote and not by a super-majority? A parliamentary paper (see Briefing 07212) at the time of the 2015 Referendum Act hinted at the reason: because the referendum was merely advisory. It “enables the electorate to voice an opinion”. How did “advisory” morph into “binding”? By that blinding dust thrown in our eyes from right and left by populist hands.


Advisory? That was a lie:

We endured a numbing complicity between government and opposition. The door out of Europe was held open by Corbyn for Johnson to walk through. In this case, if you travelled far enough to the left, you met and embraced the right coming the other way.

What did we learn in our blindness? That those not flourishing within the status quo had no good reason to vote for it; that our prolonged parliamentary chaos derived from an ill-posed yes-no question to which there were a score of answers; that the long-evolved ecology of the EU has profoundly shaped the flora of our nation’s landscape and to rip these plants out will be brutal; that what was once called a hard Brexit became soft by contrast with the threatened no-deal that even now persists; that any mode of departure, by the government’s own estimate, will shrink the economy; that we have a gift for multiple and bitter division – young against old, cities against the country, graduates against early school-leavers, Scotland and Northern Ireland against England and Wales; that all past, present and future international trade deals or treaties are a compromise with sovereignty, as is our signature on the Paris accords, or our membership of Nato, and that therefore “Take Back Control” was the emptiest, most cynical promise of this sorry season.


What we are witnessing around the world is a failure of political leadership. On the same day that Britain left the EU, politicians in Washington were opening the door for Donald Trump's acquittal.

Profiles in Courage? Give me a break.

Email ThisBlogThis!Share to TwitterShare to FacebookShare to Pinterest
Labels: Britain Leaves The EU

The British will soon find that their future will be like the sign at the bar in the local pub.

Surely, they'll be surprised by what awaits them tomorrow, TB.

Farage and his cronies have "shorted" the UK economy and stand to make their fortunes. Such is the state of modern casino capitalism. Losses will be suffered, fortunes will be made, the inevitable result of a thoroughly gamed system.

How many recall Chris Wylie warning the Brits that the referendum 3 years ago had been manipulated. The Leave side cheated, over and again. He said it was folly to throw out the "constitutional settlement" of the United Kingdom on the strength of pure chicanery.

And, yes, this is First Past The Post at its very worst. It delivered BoJo a majority, which he claimed was a mandate for Brexit, while more Brits voted for parties opposed to Brexit. In Canada we have seen that fewer than two out of five votes is more than enough to render a false majority, effectively nullifying the other three out of five.

It seems to me that this 'isolationist' mindset apparently favored by those 'on the right' is spreading world wide, Owen. Witness the rhetoric by the new 'king' to the south of us here, various regimes throughout the middle east and indeed at least two provincial regimes here in Canada. I just hope that those with a wider perspective can keep this dangerous trend at bay!

Whether in Britain, Canada or the United States, the principle that the minority carries the day is well established, Mound. And it results in debacles, where folly passes for the national will.

As long as people and their reprsentatives willfully refuse to see or hear the facts, Rural, the outcomes will be delusional.

Like I said before the last election, Owen, I really would like my ballot to have a square to put my 'x' in to read NONE OF THE ABOVE!

I'm still annoyed about NAFTA being foisted upon all of Canada, especially when I have discovered that when I purchase a vehicle that has left Japan on a boat that steams directly into our Vancouver harbour, is unloaded and put on a vehicle to deliver to a site here in British Columbia - NEVER touching American soil or waters, and yet I have to pay US prices plus the current exchange rate for said vehicle. When any item is imported and delivered direct to Canada, yet I must pay in US funds, then there is no such animal as a "free" trade agreement. At least in my mind that is the case and I have yet to have someone explain to me why "but things are different".

It's all about establishing an advantage for someone, Lulymay -- which means putting someone else at a disadvantage.

Who profits? The disruptors built this bughouse and now they win again. They're laughing. It seldom works out that well for the slugs but a lot of them will be cheering. They bought a tee shirt and think they're on a team of some sort.

Con men -- and women -- have done a roaring business since the beginning of the race, John. It has always been thus.

Many people do believe if they wear the t shirt they're part of the team. it maybe a grasp to feel they are part of a team or that some how they run with the adults, etc. but not so much. Its usually a symptom of inadequacy and insecurity.

There is enough out there to leave one to conclude the vote wasn't totally above board. Who benefits? for a start Russia. they want the E.U. gone and NATO. What the Brits may find is they are back to a standard of living they had prior to and after WW II, until some time in the 1960s. If people want to see the realities of life in England around that time, in B.C. the Knowledge Net work runs a T.V. series Call the Mid Wife. The poverty, living conditions, awful.

Much of this was about racism. Not much has changed in England. They used to have a disgusting line, "the wogs begin in Calais". They just don't want people of colour, they want other Europeans gone also particularly those of former eastern bloc countries. The haters will be in for a big surprise. People of colour will still be there and those from the former eastern block countries.

Proportional Representation would be a good place to start, e.a.f. Far fewer votes would be wasted.