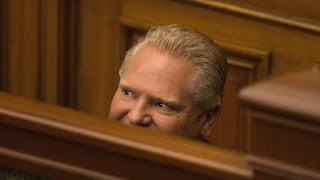 During the federal election, Doug Ford kept his head down and his mouth shut. But, if you really want to know what's going on inside Ford's head, Martin Regg Cohn writes that you should pay attention to what he said on his visit to Washington:

In the rarefied air of Washington this month, Ford forgot himself. Or more precisely, he allowed himself to be himself.

How else to explain his passionate homage to Donald Trump?

“I loved listening to the president’s State of the Union address the other night,” Ford gushed to a hushed Canadian American Business Council. “We hope the election is going to turn out the right way. Literally the right way.”


And he expressed his disdain for Bernie Sanders:

Ford went on to badmouth Bernie Sanders, the current front-runner in the party’s primaries, for daring to call himself a social democrat: “That’s actually scary. It is. It really is.”

Never mind that Sanders is merely an echo of the New Democratic Party that came second among Ontario voters in the election, and that now serves faithfully as Her Majesty’s Loyal Opposition in the legislature. Scary for Americans, which translates as shame on you Ontarians, in Ford’s book.


There is an old Canadian norm: when you visit a foreign country, you don't meddle in its politics. Occasionally that norm has been broken -- as when Lester Pearson publicly disagreed with LBJ on the Vietnam War. But Pearson was a diplomat at his core. And he knew how to express a difference of opinion diplomatically. Ford's comments on Sanders underscore the fact that Ford possesses no diplomatic talent.

Moreover, it's becoming increasingly apparent that Ford possesses no talent all all.

.. Doug Ford's Education lieutenant appears to have been caught speaking, one assumes for Doug re the current impasse and something about a billion & a half $ difference. He clearly said they had made an offer to the teachers that was not accepted.. yet seemingly, neither the appointed mediator or teachers has seen said offer. He was confronted on camera (a woman's voice) to produce the mysterious offer. A stumbling explanation was blurted.. 'we offered them an opportunity!' ..

Don't we just wish for a contract negotiation documentary like NFB's Final Offer (Sturla Gunnarsson) of Doug the Educator, and his loyal partisan hacks like Lecce. That young Harper bagman who polished his 'great communicator' (said Doug Ford) skills at the knee of the great glib grifters like Harper & Fantino, Baird & Clement, Kenney & Peter Kent. What a great score for Doug Ford to have fine Christian Crusaders like Stephen Lecce and Charles McVetey to slay the infidels & rescue the holy grail - Ontario Education

Doug the Glib seems more and more to have painted himself into multiple corners all at once.. Venturing loudly into the American political nightmare on our dime, when he is proving to be a domestic failure, indeed a gasbag here as well.. again on our dime.. seems futile.. for all concerned.. especially the students, who appear to be only a vague symbol or abstract persons somewhere down the rabbit hole he inhabits.

You're right, sal. Ford paints himself into multiple corners -- and he doesn't seem to understand how he got there.

I read your posts on Doug Ford, Owen, and I'm usually left at a loss for words. Political hooliganism? Does that capture the moment?

I'm sure Doug sees in Trump a kindred spirit. They're both thugs of low intellectual wattage who've managed to live privileged lives on the backs of their fathers' accomplishments.

His brother seemed that he could be a pretty nice guy at times and was a good entertainer. This guy is the latest and worst in a long line of CRAP Party fraudsters who have absolutely nothing. Their last line of offence, The Harper Smirk, is no good to a guy who's so obviously uncaring and thoughtless.

A short phrase that pretty well covers it, Mound. Ontarians really didn't think through their options last time around. When we're driven by anger, we frequently make bad choices.

Both men inherited their fathers' money, Cap. Unfortunately, neither man inherited a sense of noblesse oblige.

"Thoughtless" is pretty accurate, John. I doubt that Doug has had a new thought in decades.