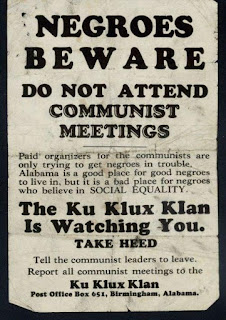 In attempts to whip up public hostility and force an end to the protests, both official opposition leader Andrew Scheer and Peter MacKay, who is vying to replace him, turned to civil-rights-era racist stereotypes. Invoking the spectre of the “outside agitator,” they sought to delegitimize the involvement of non-Indigenous protesters in order to break the bonds of activist solidarity that can be so crucial in creating the political will to address the conditions of inequality and oppression that underlie civil unrest.


The "outside agitator" meme has been boilerplate for white southern segregationists:

As then-president of the West Virginia State Bar Association, William C. Beatty put it, civil disobedience was the result of “mob action tailor made for those few malcontents who desire the total breakdown of organized society.” Often portrayed as players in a communist conspiracy, these outsiders were presented as acting not in the interests of African Americans, but to further their own ulterior motives.


That argument has been furious and false:

This outside agitator thesis was quickly shown not only to be inaccurate, but also the result of racist thinking. In 1968, the National Advisory Commission on Civil Disorders found the “typical rioter is not an outside agitator or itinerant vender of violence,” but rather “a young, frustrated, alienated black American.” Additionally, a 1969 study of middle-class white attitudes toward African Americans in the aftermath of the Watts Rebellion in Los Angeles found a sharp divergence between whites who believed that the unrest was caused by communists or outside agitators, and those who believed that systemic oppression of and discrimination against African Americans, were to blame. Strikingly, whites who believed the outside agitator explanation lacked previous social contact with African Americans, suggesting ignorance and a lack of empathy for the legitimate grievances of the Black community. Unsurprisingly, this group was more likely to favour punitive measures as a response to civil unrest.


It's interesting that Dennis Prager has been invited to speak at the Manning Center Conference in Calgary. The CBC reports that:

The Calgary-based Manning Centre will feature as a keynote speaker American conservative radio host Dennis Prager — a fiery and often controversial figure who recently complained that the left has made it "impossible" to say the N-word.

"It's disgusting, it's a farce. It's the only word that you can't say in the English language," Prager said in a clip that was initially flagged on Twitter by a writer for U.S. progressive nonprofit Media Matters for America.

Prager was responding to a caller on his radio show, The Dennis Prager Show, who asked Prager why he used an anti-Semitic slur on his program but would not use "the N-word."

No one should misunderstand where the Conservative Party is headed.

Image: Democratic Underground
Posted by Owen Gray at 9:44 am

I guess all "outside agitators" will be required to apply for a permit before being allowed to object to Tyranny. Civil disobedience is too hard these days. Thoreau would be displeased

I read articles like these. I comment on first nation rights, petro-idiocy, and the climate emergency. I send money to help these causes in court. I must be an outside agitator even though I'm a 72 year old Nova Scotian who has supported NDP, Green and Liberal candidate over the past 5 decades.

Come and get me Pete, Jason et al.

They think that "outside agitators" are young and ignorant, rumley. How wrong they are!

When I opened my email this morning there was one from Angus Reid with the results of their latest poll on reaction to the Wet'suwet'en dispute and the protests that have swept the country, west to east.

Later, Bill Longstaff posted that the First Nations were risking the loss of public support.

What so many are missing is that this isn't about popularity or garnering approval. No, it's about civil disobedience, throwing a wrench in the gears. It's more in the nature of a non-violent insurgency than a protest.

Civil disobedience isn't a contest for hearts and minds. It's a small group using what little leverage they can muster to defend themselves or effect change. In Macleans, David Moscrop brought out the parallels between the Wet'suwet'en and MLK's Freedom March on Washington.

"The Angus Reid Institute reports that a mere two-in-five people support the protesters. People are worried about violence and disruption. Some think the efforts are pointless. In 1963, Americans were asked what they thought of Martin Luther King’s march on Washington. Sixty percent of them “had an unfavourable view of the march, stating that they felt it would cause violence and would not accomplish anything.” In Canada, the public has long had mixed feelings about—and, at times, thuggish and violent counter-reaction to—acts of resistance: the Red River Rebellion; the Winnipeg general strike; the Oka Crisis; Idle No More; even last summer’s climate marches."

Yesterday Christiana Figueres, former head of the UN Framework Agreement on Climate Change, openly called for civil disobedience wherever possible. She argues that electoral politics will not produce the change needed in the dwindling time remaining. In legal jargon, that's the "defence of necessity."

I've been delving into the topic of civil disobedience for the last couple of years because the inescapable truth is that the state will not keep its promises, it will not perform its duty to the people, especially our young people, with the urgency so plainly required, and it yields far too much deference to corporate interests at the expense of the public interest.

It's clear that this is about more than a pipeline, Mound. And it's also clear that the dividing lines are generational. Increasingly, it looks like we're at a tipping point.