Who Is Mistreating Whom? 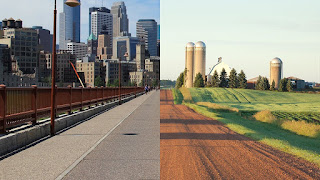 Now that Teck has withdrawn its application for an oilsands mine in northern Alberta, Jason Kenney will be spitting fire and brimestone, blaming Ottawa for what he sees as a failure. He will repeat his song of grievance, claiming that Ottawa  has treated Alberta unfairly since time immemorial. But Kenney is a hyocrite. If you're interested in unfair treatment, Mitchell Anderson writes, look at the gulf between Alberta's rural communities and its cities:

Alberta Premier Jason Kenney’s most recent political career is defined by battling perceived inequities with Ottawa. The province’s municipalities seem to feel the same way about their lopsided relationship with the legislature.

“The real fiscal imbalance in this country is not between provinces and regions, it’s between cities and everyone else. Taxpayers in the cities pay the freight… If you want to talk about fair deals, I’m happy to have that conversation.”

A study from 2014 showed the Alberta government took in $2.7 billion more from the City of Calgary than it returned in provincial funding — an imbalance that ballooned from $883 million in 1991.

While rural Albertan municipalities are being told by the premier to eat $173 million in unpaid property taxes from oil and gas companies, the province’s largest cities have their own fiscal indignities to deal with.

Kenney’s government slashed funding to the City of Calgary by $73 million in its last budget, and imposed a $13-million cut in funding for Calgary police — the equivalent of 130 full-time positions, the chief of police said.

“From a government that prides itself on law and order, the fact that the biggest whack by far that they took to the city’s budget was to the police, is pretty surprising to me,” fumed Nenshi. Calgary city council was forced to cut $60 million in program spending, with the remaining $13 million coming out of capital reserves.

Running an effective government is hard when senior partners exercise arbitrary authority over budgets and policy.


And it's Calgary -- the beating heart of the oil industry -- that is being squeezed:

Calgary has been trying to expand public transit capacity and has an agreement with the province to go ahead with the Green Line LRT project, which the city says would create 20,000 jobs and move up to 170,000 people a day. Instead of providing stable predictable funding, the Kenney government last fall passed Bill 20 that allows the province to cancel committed infrastructure funding to local governments without cause and only 90 days’ notice.

Provincial funding cuts also forced the Calgary Board of Education to axe a popular transit pass program that helped low-income families cover the cost of getting children to school.

Alberta’s largest city already has a 10-year funding gap for infrastructure spending of $5.7 billion. Rather than expanding services for a growing population, Calgary councillors report that they can only maintain legally required municipal assets and essential services. Other urgent priorities languish on the drawing board, with potentially disastrous results.


Like the Mighty Moron south of the border, Kenney's strength is in the open spaces, not in the population centres. Just who is treating whom unfairly?

Kenney appears to be forgetting an essential truth, Owen: all politics is local.

It appears to me, Lorne, that Kenney's perspective is getting narrower and narrower. Such is not the path to wisdom.

When you vote in an ideologue, you'd better be prepared to take what it dishes out. Or like the young folk, get out of town and leave the dilbit behind for pastures new.

There appear to be enough numpties left in Wildrose Country content to be masochists and true believers in the Preston Manning spirit of handing out corporate welfare. If they're like the American version who adulate Trumpkins, shots in the foot are welcome. Ouch! they cry. Thanks Jason! More!

Preston has just written a new book about something or other, it matters not about what, because it will be soothingly simpleton in logic, and fake cowboys in stiff new hats will rejoice. JT will be reviled over everything, and we will be assured for the thousandth time that an Albertan is worth a half-dozen mere Canucks and should be running the country on approved redneck lines. That way Alberta will get a square deal. harper tried it by ruthless subterfuge and we didn't like it once the ramifications were clear. Government by goon. Still, Ontarians weren't convinced enough and voted in the biggest goon of all, Doug Fraud. OTOH Ontarians seem to have learnt their lesson, while Albertans still believe in the tooth fairy and have never booed kenney en masse.

I don't know if there is a cure for Alberta, but Teck is trying to help them not spend money they'll never recoup. Probably spoke to insurance companies and discovered that wow, these businessmen do believe in climate change and want to issue policies, if at all, with premiums commensurate with risk. Digging up tarsands and possibly polluting hundreds of square kilometres by accident? What could possibly go wrong? says the kenney brigade of lowbrow cunning and bleat. But those insurance people, they know what's what.

The world is starting to really rain on kenney's parade. Expect him to become even more vindictive and divisive. A bit more nonsense and even the Dauphin may feel bold enough to issue a shot across its bows instead of hiding behind his whiskers.

Kenney is in a jam, Owen, and it suits him perfectly. As premier he's gone out of his way to be a prick to everyone not on Team Jason. He threatened BC. He threatened Ottawa. He became Captain Wexit. Now, no matter how he tries to smear Trudeau, it's plain the markets have turned on Alberta and, especially, bitumen. At least Canute had the integrity to admit he couldn't turn back the sea.

The world is indeed, raining on Jason's parade, BM. But Jason still hasn't understood that it's time to come in from the rain.

I agree, Mound. Kenney doesn't understand that the tide has turned.