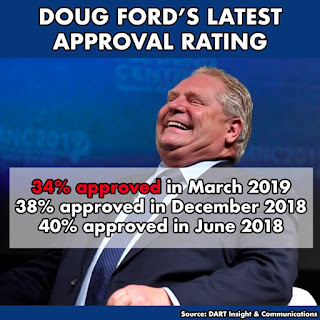 Last week, Ford sat down for an interview with the Canadian American Business Council in Washington (a non-profit business organization), where he regaled that organization’s CEO, Maryscott Greenwood, with tales of a booming Ontario open for business.

“Economics is very simple,” he told Greenwood. “You cut red tape, you cut regulations, you lower business taxes and taxes for the people, and new revenue will come up to the coffers, as we say. And with that you can reinvest it into other areas, into health care, into education. Our economy right now is absolutely on fire.”


The trouble is that back home things are not as good as Ford says they are:

What the Premier didn’t tell his foreign hosts is that those “other areas” are not reaping the reward of his “simple” economic proposal; they are hurting as a result of it. Teachers are protesting major cuts to education, and the provincial government and the unions are at an impasse. Kids are missing school and their parents are not putting the blame squarely on teachers, as Education Minister Stephen Lecce might have hoped. According to a new internal poll commissioned by the Ontario Secondary School Teachers’ Federation, a little more than half of residents polled in PC ridings strongly disagree with the government’s championing of larger class sizes.

As for that other “other area” (health care) — it’s hard to believe Ontarians are comforted by the notion that trickle-down economics will fill the holes carved out by cuts made to their health care system, when the world is frantically trying to stall coronavirus.


And, while he was there, Ford also waded into the upcoming Amercan election:

“I loved listening to the president on the State of the Union address the other night,” he told Greenwood. “I was disappointed when I saw Nancy Pelosi get up there and start tearing the speech up. That’s uncalled for. But let’s move forward. Let’s see what happens in the (U.S.) election. The economy is booming (in the States), it’s booming in Ontario. We hope the (U.S.) election is going to turn out the right way, literally the right way.”


One can only conclude that Mr. Ford's ego is bigger than his brain.

I hate to quote George HW Bush, but he said it best when he called this "voodoo economics." Ever since Laffer penned out his trickle down nonsense on the back of a cocktail napkin it has never worked as advertised. I don't know how conservatives don't get laughed of stage when they spout these zombie lies.

What Ford is spouting has been proved wrong time and time again, Cap. Unfortunately, he doesn't keep up with the latest data.

Unless our clown premier is using the royal we, Owen, I do object to his presuming to speak for Ontarians when he gushes over the Americans' clown president.

Ford's folly, Lorne, is his presumption that he speaks for Ontarians. His numbers indicate that he doesn't.

Ford's flunkies are telling him to emulate Trump even to the point of employing his dim-witted speech whiskers. Say anything you want about booming economies or union bosses and say it again and again. That's all it takes for the audience he's targetting. No matter how low his approvals go, he's got his Fifth Avenue CRAP Partiers too.

As long as there's an audience for Ford's or Trump's lies, John, there will always be a megaphone.

Ford most likely wants to grow up to be just like Trump. The people of Ontario have seen the error of their ways. After the next provincial election we can expect the Conservatives to be gone. of course if Ford finds himself a bill barr who knows what can happen. The Conservatives may also decide to give Ford the boot, if he falls any further in the polls. In B.C. the B.C. Lieberals (Cons) got rid of Gordon Campbell and replaced him with Christy Clark and they were good to go again. After 16 years of that type of rule we were know as the best place in the western world to launder money, had the highest fent. death rate in Canada, education was going down the toilet, etc.

The American economy is not "booming". There are a lot of jobs, but the wages have not increased and Americans are getting poorer, not richer except those who were already rich.

As distrust in the American legal system grows, the economy will take a dive, because trust will have been lost. Ontario will most likely be the first to feel the impact of an American depression. Hope ford enjoys himself while he can.

Despite his bluster, e.a.f, I suspect that Ford is not enjoying himself.