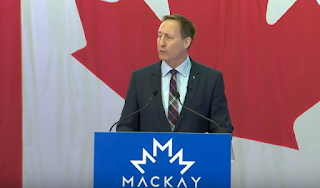 It's beginning to look like Peter MacKay will have an easy path to the leadership of the Conservative Party. Martin Taube writes that easy victories can lead to disasters. He points to the ill fated voyage of Kim Campbell:

In 1993, Progressive Conservative cabinet minister Kim Campbell declared her intentions to replace outgoing prime minister Brian Mulroney. She was well-liked by caucus, and more than half of them backed her. There was hope she would evolve into a Canadian version of then-British prime minister Margaret Thatcher.

Prominent Tories like Perrin Beatty, Pat Carney, Joe Clark and Michael Wilson all opted against running. They likely sensed a massive tidal wave toward a political coronation, and put their leadership ambitions on hold. In most cases, for good.

Campbell turned out to be a disaster. Her weaknesses became painfully obvious. She had barely any political experience, a poor understanding of economic policy, and no filter with the public or press. Her huge lead almost evaporated, and she was fortunate to beat Charest for the PC leadership.

During her infamous interview with Peter C. Newman for Vancouver Magazine, she called Canadians who stayed out of the political process “apathetic SOBs,” and said she became an Anglican to keep away from “the evil demons of the papacy.”

The PCs went down from 157 seats to 2, and never recovered. Campbell lost her own seat, and resigned shortly thereafter. In her concession speech, she said, “Gee, I’m glad I didn’t sell my car.” It was the only amusing comment she ever made.


It's true that Peter MacKay has been around for a lot longer than Kim Campbell was. But he's been out of the game for awhile and he may be rusty. He -- and the Conservative Party -- should get a run for their money.

Taube's portrait of Kim Campbell as having "barely any political experience" is way off the mark. Frankly, I don't know how that got past an editor.

Campbell had served 5 years as an MP, including 3 years as Justice Minister, before being elected party leader. Prior to that, she'd been a BC MLA for 2 years. That's more political experience than Justin, Andrew or Jagmeet had on being elected leader. And let's not forget that Kim never stood a chance at being elected PM. The country was disgusted with the rank corruption of Lyin' Brian and slapping a fresh coat of paint on the old Mulroney jalopy wasn't going to cut it.

I'm really not sure there's any useful comparison to be made between Campbell and MacKay. The situation the party is in now is very different, and the party itself is very different. Besides, Peter's a lightweight compared to Kim. Her post-politics achievements are impressive; his not so much. He's not much of a leader and that's obvious to voters.

I agree that Campbell's post political life is far more impressive than Mackay's, Cap. But I think the essential thesis that a political coronation usually does not turn out well is valid.

I agree with Cap on Campbell. We saw her as a powerhouse in her stint in the BC legislature. When she headed to Ottawa she sparked a stir in the Tory ranks. I took a call from a Tory insider, an old friend, asking me to dig up whatever I could on her, in particular her alleged partying with Margaret Sinclair, later Margaret Trudeau. From the outset they recognized her drive and feared she would muscle her way to the top without "putting in her time."

Remember that Campbell was the frontrunner in the opening stage of the campaign. What seemed to hole her hull was when the party PR types ran that disgusting ad suggesting Chretien's facial impairment would be an embarrassment on the world stage. Campbell moved quickly to distance herself but, it seems, it was too late. That ad was the straw that broke the PC camel's back.

The Chretien ad revealed the ugly centre of the party, Mound. Perhaps I've been too hard on Campbell. After all, the defeat wasn't really Campbell's defeat. It was Mulroney's -- who went from the largest majority in Canadian history to two seats in the House of Commons.

While I didn't have much against her, beyond the line about how an election campaign is no place for serious discussions, I was relieved to see her go. I have difficulty trusting people with her unbridled ambition. They often disappoint, or worse.

If they want a leader entirely devoid of integrity, Owen, they couldn't pick a better candidate than Peter MacKay; he is, after all, the same MacKay who, when he was running for the leadership of the Progressive Conservatives, promised David Orchard that he would never merge the party with Reform/Alliance. In exchange, Orchard dropped his bid for leadership, and within a year, MacKay merged the parties, leading to its present-day sad configuration.

Generally speaking, I throught that she was intelligent and, at the same time, prone to open her mouth before thinking, Mound. That ailment is remarkably common.

And it is for that reason, Lorne, that I simply don't trust MacKay.

The P.C. party was about as far out of line of vision as possible, being a tad to the left, but I did like Kim Campbell. Some of the comments attributed to her, actually are funny and on the mark, its just people weren't ready for some one as fresh as she was. It also went sideways because she was female. of course mulroney was the problem so she wasn't going to anywhere. No one was going to win after Mulroney's run. If she came to the party now, at the age sh was then the opposition parties would have a problem. she is smart, funny and at time irrevant.

As far as Mckay is concerned, don't think he has what it takes. He isn't strong enough, in my opinion, to pull the party to the middle and it will continue to languish in second place or even in third. He isn't any stronger than what's his name who is on his way out. Then there is the issue of can you really trust him.

.. surely MacKay could be bested by.that eminant dam stateswoman, former BC Liberal Premier Christy 'point of no return' Clark ? Not only would she find friendly warm fuzzy votes among the So Con 'aint got no.. satisfaction' Rapture brigade.. but think what she could accomplish in aid of Rich Coleman et al in beautiful British Columbia.. the province known as 'tidewater'.

Further, Missy Clark is a familiar face to many of the Conservative intellectuals, those lofty senior aides de camp such as Novak, Lecce, Byrne, Boessenkool, Koolsbergen, Wolf.. and Arthur Hamilton. She's also highly popular among Big Energy zealots & lobbyists, known to roll over for cash when the subject of energy royalties comes up. Also a fierce voice when federal approval and/or subsidies are needed.

In short, she's the perfect sexy fit for those stodgy old stock, snots from the prairie.. Yes, the lost Harper Brigage, even Tony Clement.. would find a helpful champion in Christy Clark.. Always remember too that when James Moore needed to spend more time with his family immediately after suddenly bailing out fom the Harper Omnibus Caucus.. something unsavoury about @ridemeWilfred was being obscured.. ? Why Christy had him set up toute suite as Chancellor of a BC Unjversity. Hell, Ken Boessenkool was parachuted in as her Chief of Staff on zero notice when Harper hinted he'd like that.. Sadly, Boessenkool was jettisoned back to spend more time with his family in Alberta.. but again Ms Clark and all her crew to the rescue when not even a post it note could be found when he was suddenly pensioned or paid off ! Now that's a proven talent much desired for today's kinder gentler secretive Conservatory Brand.. and hey ! She can probably go full 'downward dog' in yoga.. try that Mr MacKay !!

That's the party's essential problem, e.a.f. It needs to move to the centre -- and it doesn't want to.

If the Conservatives are willing return to the past to support Mackay, sal, surely Christy would be another Conservative Blast From The Past.