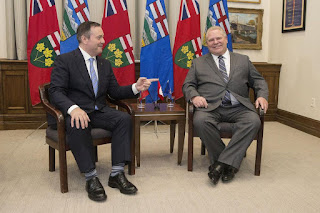 Jason Kenney and Doug Ford used to be the best of friends. But times have changed. Kieran Leaviett and Alex Boyd write:

The anti-carbon-tax rally in fall of 2018 was perhaps the peak of what, once upon a time, was dubbed the “bromance” of Ford and Kenney, when they marched arm in arm against the Liberals in defence of provincial jurisdiction and the imposition of a federal carbon tax.

Back then, the newly elected populist leader of Ontario and the former federal politician who’d gone west to champion Alberta — Kenney would become premier in April 2019 — were the vanguard of a cross-provincial conservative movement going full tilt against Justin Trudeau in Ottawa ahead of last year’s federal vote.


But Trudeau won the election. And now Kenney and Ford have to work with him:

After Andrew Scheer and the Conservative party failed to take down Trudeau, who won a minority government in October, political analysts say Ford and Kenney now must focus on the problems at home and look at working with the federal government.

The realities of running a province are creeping in, [Conservative spokesman Tim] Powers said. That means the close political alliance may be starting to take a back seat to the demands of two very different jurisdictions that have their own problems to deal with.

It may have been an unlikely match. Ford was a populist, riding a wave of anti-establishment support all the way to Queen’s Park in 2018, while some see Kenney as an establishment Conservative, who spent many years in Ottawa as an MP before swapping out suits for jeans to campaign for premier across Alberta in a dark blue pickup.

But according to one former Ontario Progressive Conservative staffer, the bromance — a term Postmedia reported that Kenney used himself at the national Conservative convention in 2018 — was more than just politically expedient for the two premiers.

Ford must try to capture moderates in the centre of the political spectrum at home and Kenney will have to deal with a separatist movement on his right, which could prove dangerous for him in the next provincial election.

“For Kenney, the real challenge in the next election is keeping from having a Wexit party that is siphoning off 20 per cent of his vote.”


Politics makes strange bedfellows. And when their priorities change, they change beds.

If the Wexit party siphons off a substantial portion of the Con vote, it'll be an own-goal. Kenney, more than any other politician, is responsible for the Wexit lunacy.

As for the Ford-Kenney bromance, that one suffered irreparable damage when Scheer's gang locked Ford in a closet in a gimp suit and invited Kenney to campaign for them in Ontario. I doubt Kenney can count on Ford's support unless their interests are aligned.

Like you, Cap, my hunch is that self interest will put an end to the bromance.

A giant, heaving pox on them both. Well that certainly made me feel better.

Yes, the keep hopping beds like a couple of old whores. Those two give a whole new meaning to the term. At least sex trade workers provide a service and earn their money. those two guys, not so much.

Kenny is going to have to face the electorate with no improvement to the economy with high unemployment. His decision to cut health care position in Alberta is not going to win him many votes. He already fired sixty highly skilled forest fire workers, those who repel into fire zones. B.C. hired most of them. Kenny doesn't really know how to manage an economy or make friends. Kenny can't understand or want to understand he world is changing. Alberta's tar/oil is only profitable when other oil has a high price. My expectation is, that for the next twenty years at least, the price of oil will remain flat. Kenny isn't even smart enough to ask Ottawa for money to clean up the orphaned wells, which would provide some work. The local politicians will also turn on Kenny. they're having a hard go of it because they've lost their local tax base. companies either have left or simply aren't paying their taxes.

Ford, the populist, will not understand it when the voters turn on him if he doesn't settle the teachers strike. People wanted lower taxes, but they don't always understand that results in fewer services, and that includes problems with education. We have seen that story often enough in B.C. and when things get bad, people will get upset because they see education as a way for their children get ahead. Bringing in American style education and cuts isn't going to work.

Looking forward to both of them becoming unemployed in another few years.

Both men seem to have a talent for screwing things up, e.a.f.