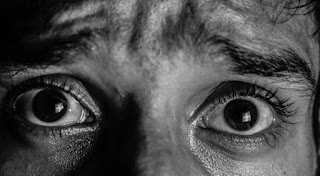 In the wake of Donald Trump's acquittal, Senator Sherrod Brown has written a devastating op-ed about the fear which grips the Republican Party:

History has indeed taught us that when it comes to the instincts that drive us, fear has no rival. As the lead House impeachment manager, Representative Adam Schiff, has noted, Robert Kennedy spoke of how “moral courage is a rarer commodity than bravery in battle.”

Playing on that fear, the Senate majority leader, Mitch McConnell, sought a quick impeachment trial for President Trump with as little attention to it as possible. Reporters, who usually roam the Capitol freely, have been cordoned off like cattle in select areas. Mr. McConnell ordered limited camera views in the Senate chamber so only presenters — not absent senators — could be spotted.

And barely a peep from Republican lawmakers.


It truly was a pathetic display:

One journalist remarked to me, “How in the world can these senators walk around here upright when they have no backbone?”

Fear has a way of bending us.

Of course, the Republican senators who have covered for Mr. Trump love what he delivers for them. But Vice President Mike Pence would give them the same judges, the same tax cuts, the same attacks on workers’ rights and the environment. So that’s not really the reason for their united chorus of “not guilty.”

For the stay-in-office-at-all-cost representatives and senators, fear is the motivator. They are afraid that Mr. Trump might give them a nickname like “Low Energy Jeb” and “Lyin’ Ted,” or that he might tweet about their disloyalty. Or — worst of all — that he might come to their state to campaign against them in the Republican primary. They worry:

“Will the hosts on Fox attack me?”

“Will the mouthpieces on talk radio go after me?”


Under Trump, the mouthpieces on talk radio -- like Rush Limbaugh -- are given the Presidential Medal of Freedom. And Republicans quiver and twist themselves into ugly and foolish arguments:

Watching the mental contortions they perform to justify their votes is painful to behold: They claim that calling witnesses would have meant a never-ending trial. They tell us they’ve made up their minds, so why would we need new evidence? They say to convict this president now would lead to the impeachment of every future president — as if every president will try to sell our national security to the highest bidder.


Only one Republican in Congress -- Mitt Romney -- showed any courage. History will remember him kindly. All the other Republicans will live in infamy.

Politico has a piece about Rachel Bitecofer and her turnout is paramount theory. Trump instils fear in republican senators but at the same time scares democratic voters.

He motivates Ted Cruz to lie for him but also motivates Democrats to get out the vote.

There are a lot more voters against Trump than for him, rumley. Hillary won by three million votes. The trick will be beating the Electoral College.

.. look forward to reading her oped thanks.. in full !

Its a point I banter more on Twitter lately.. that the history books are not going to be their friends.. EVER .. Quite the opposite. The Republican garbage train, gravy train, hell, pick a name or analogy for parasites like The Trump Hallelujah Choir & Dance Troop.. and go with it ! Think rancid, sellout, despicable, ignorant, devious, snivelling, hinky kinky, dumb as a hammer.

Heroism came knocking and they were found to be fatheads, drunk with position, wealth and power, yet in any estimation of any sort... Republicans were found wanting. The 'Right Stuff' aint in their dime store makeup kit nor do they have enough lipstick on hand to lip gloss their pig of a party

But ya gotta admire the abject tenacity, the mendacity, the vainglorious self congratulation, the flatulation and the holier than thou, conceit deceit of preposterous 'logic' or 'perception' .. Choose, McConnell or Lindsay Graham or the misc frazzled fuzzy brained Senators. The closing of the stinking rank.. and I do mean rank.. the wagon circling, the shake n bake partisan mindlessness, hell.. the cowardice !! Its fever pitch senatorial flashblob stumbling about in public by the motley elected current & slimy lamprey eels of THE SENATE !!

These spineless creatures are a reminder, sal, that republics are destroyed -- not from without -- but from within.

Is it rooted in their ability to mine the depths of our intellectual laziness and stupidity or in their absolute shamelessness while living lives of pure sycophancy? What would dad have thought of a world where people take pride in their success as ass kissers? We've got to get over the shock, use every opportunity to call them what they are and find out whether enough of us still care. Otherwise we should all just find a cult that gives us comfort and wait until they tell us to line up for our ration of the Kool Aid.

The sham trial in the Senate was a loyalty test, and all but Romney passed. Romney will be made an example of - that's how autocrats establish control. If you want to see how it works, punch "Saddam Purges Government" into YouTube.

The Senators have said they see nothing wrong with Trump interfering in elections. They have agreed that he may seek foreign assistance to do so. And they have allowed the Trump regime to ignore Congressional subpoenas. None of this is consistent with modern liberal democracy and I see no reason to continue to refer to the US as one.

I expect Trump to move quickly now to consolidate power and will not be surprised if the next election resembles those in Hungary, Poland and Russia.

There seem to be a lot of senators saying "I know he did the deeds, but they're not a high crime/misdemeanor". Track down and gather those names, add all their names on a big list and project it on buildings, publish it, nail it on the door of the Senate (a la Martin Luther), so all can act on their behaviour at the ballot box. Edmund Burke got this one right.

RJ
“The only thing necessary for the triumph of evil is for good men to do nothing.”

And, if Trump is re-elected, Cap, he'll get rid of the two term limit.

These pathetic parasites have drunk the Kool-Aide, John. And -- as was the case with Jim Jones -- they'll commit political suicide on Trump's order.

I've been wondering whether we didn't just witness the crime of jury tampering happening in plain sight right beneath the nose of America's Chief Justice John Roberts.

The majority leader, Mitch McConnell, openly stated that he was coordinating the trial with the defendant on trial, Donald J. Trump. No end of Republican senators said, in advance, that they would acquit Trump before they heard any evidence, before they even took the jurors' oath.

That less reliable Republican senators were threatened with what would befall them should they not vote to acquit surely rises to the crime of jury tampering. The reliable ones, by contrast, freely said they would be swearing a false oath. And the Chief Justice of the highest court in the land blithely presides over this farce.

It sounds to me like there was no shortage of criminality going on right under John Robert's nose.

Trump was clearly intimidating witnesses during the House investigations, Mound. This was criminality at the higest levels of government.

Precisely, RJ. It's a message from a conservative that modern conservatives have forgotten.