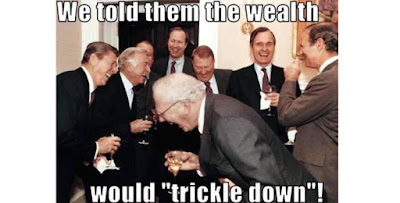 The United States has been living with Reaganomics for fifty years. Joe Biden wants to send that policy catastrophe to its well-deserved death. Linda McQuaig writes:

"Trickle-down has never worked," declared Biden in his address to Congress last week, as he rolled out a massive agenda that would drive a hole through the heart of Reaganomics and its small-government fetish (at least when it comes to government helping ordinary people).

And he wants to pay for it by raising taxes on corporations and other high-fliers last seen buckled over laughing at how massively they've swindled the American people.

To accomplish his goal, Biden is calling on other nations for help:

In a potentially game-changing move, Biden is trying to enlist major nations (through the Organization for Economic Co-operation and Development) to support a global minimum tax, which corporations would be required to pay on their worldwide income, regardless of whether it was reported in a tax haven.

Washington is proposing a minimum rate of 21 per cent. So if a U.S. corporation reports income in a country where the corporate tax rate is 5 per cent, Washington would impose an additional tax to bring that corporation's tax rate up to 21 per cent. This would mean much higher taxes for corporate giants -- Amazon, Facebook, Google, etc. -- that make extensive use of tax havens.

International tax expert Gabriel Zucman says that if other countries follow the U.S. in policing their corporations this way "it's the end of tax havens."

Germany and France have pledged support for Biden's corporate minimum tax -- but not Canada.

Trudeau said he's open to the idea, but declined to commit to it, insisting instead that Canada will always ensure its taxes are competitive with other nations. This kind of tax competition is exactly what Biden's global minimum corporate tax is designed to avoid.

As the U.S. Congress lines up to kill Biden's program, this is precisely the time for Justin to support it -- enthusiastically.

Email ThisBlogThis!Share to TwitterShare to FacebookShare to Pinterest
Labels: Ending Trickle Down

Time for us peons to write our MP with copies to each cabinet member.

Why would Trudeau want that kind of a tax system in Canada. He might have to begin paying tax himself. Anyong

And that's the point, Anyong. Most of our politicians aren't poor.

The hypocrisy of of the American taxation system is being discussed at long last. A US citizen working, living and paying taxes abroad is still required to file with their IRS. If he's paid less income tax in the host country than he would have paid with the same earnings in the state where he last resided, he's responsible to pay the US government the balance.

Biden wants to apply this treatment to the Citizens' United crowd. If he can't get the Trudeaus of the world on board they'll just renounce their "citizenship" and continue with the pretense. But if they think he can, they'll be shitting in their libertarian drawers. It's a major step toward achieving the transnational coöperation that would be required to institute a Tobin tax. That would be the beginning needed to put the billionaires back on the leashes that held them in some check when they were only millionaires. More international coöperation on taxation issues could follow. In their view, anything that crosses borders belongs in their divinely consecrated rice bowl. Nightmares!

Get ready for a load of business propaganda about the Communistic World Government threat to personal freedom. World government is a God-given property right of the Market. Heresy!

The Tobin Tax is a very simple and a very good idea, John. But it won't work unless there is international cooperation.