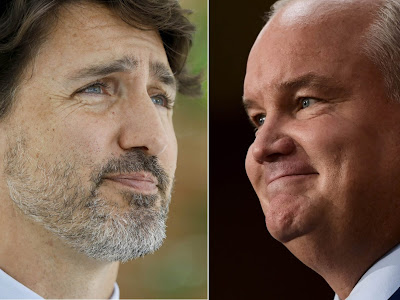 Justin Trudeau's government has made several mistakes during the pandemic. But the other guys have not been able to take him down -- because they themselves have been particularly maladroit. Michael Harris writes:

In the early days, few countries appreciated the dire threat of COVID-19. By the time they did, they were in a desperate fight against the pandemic without the necessary tools. Slowness off the mark in vaccine procurement is Ottawa’s principal sin in this matter. One day, as this country prepares itself for the Next One, a lot of things will need to be examined.

Why didn’t Canada have the capability to make vaccine domestically, in view of previous battles with the H1N1 and other viruses? As the auditor general reported to Parliament, the Public Health Agency of Canada was unprepared for the pandemic, despite 20 years of warnings, planning and spending for that inevitability.

Why didn’t the federal government take full control of the rollout of the vaccination program by declaring COVID-19 to be a national emergency?

These are pretty glaring inadequacies. But the Conservatives -- both federally and provincially -- have not been able to capitalize on them:

The Conservative leader would do better to put his shoulder to the wheel of fighting the third wave, and worry about the court-martial of those responsible later. Poking a stick in the spokes while the battle rages is smallminded, unhelpful and transparently opportunistic.

And it is worse than that.

O’Toole’s comments that PM Trudeau was “playing” with people’s lives, “leaving people behind” and running “social experiments” during a pandemic are patently absurd. The recent budget, which O’Toole rejected, was all about making sure that as many people as possible get through this disastrous disease, both from a public health and an economic point of view.

Then there are Ontario and Alberta:

With almost 500,000 cases and 8,300 now dead from COVID-19 in Ontario, Premier Doug Ford is deservedly on the hot seat. That’s why he too is trying to deflect blame from his government’s handling of the pandemic to Trudeau.

Ontario is a hot mess, and Ford is a big part of the reason. Demanding that Ottawa tighten the border and impose travel restrictions is merely the premier’s latest ruse to have people forget his abysmal record as a COVID-19 fighter.

It was Premier Ford who recently approved the arrival of 30,000 foreign students in Ontario. How’s that for travel restrictions? It was Doug Ford who ignored advice on asymptomatic testing. And it is the Ford government that is responsible for Ontario’s shameful record of deaths in the province’s long-term care facilities, some of them due to hideous neglect.

In Alberta, the wheels are coming off Jason Kenney's bus:

Then there is Premier Jason Kenney, who once accused Ottawa of forbidding Apple and Google from working directly with Alberta to improve its COVID-19 tracing app. This from the same premier who emulated Dr. Donald Trump more than Dr. Anthony Fauci in the critical early days of the pandemic. Like Trump, Kenney compared COVID-19 to the flu. Like Trump, he downplayed the deadly threat. And Kenney scoffed at other province’s restrictions aimed at containing the virus.

The result? A misinformed public. Hundreds of maskless revelers recently attended an anti-lockdown rodeo in Alberta to protest COVID-19 restrictions. Though it is true that Kenney rebuked them, it was Kenney who originally led them to believe that “Yeehaw” was a policy statement. Not in a pandemic it isn’t.

And where has Kenney’s hapless conservative populism landed him? Eighteen members of his own caucus have dissed their leader publicly, the provincial legislature is in pandemic-related lockdown, and Alberta sports the highest per capita COVID-19 infection rate in North America. “All hat and no cattle,” is the traditional Texas put-down. “No hat and no cattle, and soon, perhaps, no horse” better sums up this feckless refugee from the former Harper government.

What do citizens think of all this? We'll find out in the next election -- which, I suspect, will be not too far into the distant future.

O'Toole hasn't been able to capitalize on Trudeau's missteps because few believe he would have done better. Would he have obtained vaccines earlier? No, Canada had orders for all four of the successful vaccines, but the private vaccine-makers over-promised and under-delivered. Would he have shut down air travel? No, he's never called for that. Ordered masking sooner? No, he himself got Covid from going unmasked after the evidence for masks was clear. Called a national emergency to federalize vaccine distribution? Not a hope in hell.

In short, everyone can see that O'Toole would have aped Trump had he been PM. He's just not up to the task.

I've reached the same conclusion, Cap. We'll have to see how many Canadians agree with us.

When you look back at the line of political leaders, the Tories have more than their fair share of duds. O'Toole, Scheer, Harper (on and off), McKay. When they did prevail it was as much the failure of the Liberals, i.e. scandal, as anything else. Not one person of vision in that crowd. Harper's once-BFF, Tom Flanagan, said Steve "eschewed vision." No surprise there.

Chretien is admired for his majority wins but he was pushing on an open door with Reform/Alliance at the Prog Cons' throat.

Neither party has any cause to boast of their leadership. A part-time counter clerk at a ma and pa insurance agency. That's your CV? A Mail Room maestro? A high school drama coach? These are not people steeped in deep ideas and great vision. A pedestrian bunch, through and through.

What I think will happen in the next runoff, which should worry the Libs, is voter apathy. There's not much there to fuel your appetite. Why bother?

Lack of vision and voter apathy is a combination that does not bode well for the future, Mound.