Much More Than Cowardice 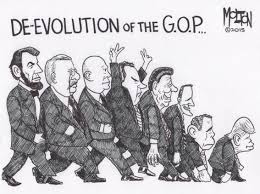 The conventional wisdom these days is that Republicans are doing what they're doing because they're cowards. Greg Sargeant writes:

As a broad description of our current moment, this is profoundly insufficient. It risks misleading people about the true nature of the threat posed by the GOP’s ongoing radicalization.

Obviously fear of attacks from Trump — or from right-wing media or primary challengers — is one motivator. But by itself, this simply won’t do: It implies that Republicans would prefer on principle to stand firm in defense of democracy but are not doing so simply out of fear of facing immediate political consequences.

The truth is much more sinister than that:

It’s impossible to chalk this effort up to “cowardice” or “fear of Trump.” It is a deliberate action plainly undertaken to manufacture fake evidence for the affirmative purpose of further undermining faith in our electoral system going forward.

The Republicans have made careful calculations. They know exactly what they're doing:

Republicans are employing their own invented doubts about 2020 to justify intensified voter suppression everywhere. [Jim] Banks neatly crystallized the point on Fox, saying those doubts required more voting restrictions — after reinforcing them himself.

Indeed, with all this, Republicans may be in the process of creating a kind of permanent justification for maximal efforts to invalidate future election outcomes by whatever means are within reach.

The lies about 2020 and the increasing dedication to destroying democratic institutions in the quest for power are inextricable from one another. As Jay Rosen says, the press is comfortable calling out the former — it can be packaged as a “fact check." But being forthright about the latter requires depicting one party as far and away the only primary threat to our democratic stability. That’s accurate, but it’s uncomfortably adversarial.

Relatedly, describing Republicans as “cowards” who “fear Trump” casts their machinations as mere reluctant efforts to cope with externally imposed circumstances they’d prefer not to be dealing with. This lets Republicans off the hook in a very fundamental way. It risks misleading the country about the true depths of GOP radicalization — and the real dangers it poses.

The Republicans crave power. And they're willing to destroy democracy to get it.

It's not only Republicans who crave power, there are lots of corporations looking to benefit from a fascistic government and they're providing the financial muscle to get it.

The media hesitates to properly name what we're seeing. My Collins dictionary defines fascism as "any right-wing nationalist ideology or movement with an authoritarian and hierarchical structure that is fundamentally opposed to democracy and liberalism." In other words, the current GOP. Until we recognize what we are facing, we can't act appropriately. But the media is afraid of being called biased and of the repercussions should Republicans gain power.

But the DOJ's failure to prosecute Trump and his associates is the biggest contributor to the enormous leaps towards fascism the GOP has made since Trump left office. The evidence to establish a case against Trump was presented to the Senate. There's no need for further investigation, since Trump provoked the events of January 6th openly and on live TV. Trump also openly and proudly obstructed justice, so again, no need for further investigation. As Mitch McConnell himself said, "President Trump is still liable for everything he did while in office. He didn't get away with anything yet. We're have a criminal justice system in this country." I've yet to see any willingness by the DOJ to prosecute Trump, so he is getting away with it. And the GOP's not to blame for that.

George Orwell understood how those who crave power corrupt language, Cap. It's the corruption of language -- the English language -- which is at the heart of what the GOP is doing.

The 2014 Gilens and Page report confirmed what many, perhaps most, suspected: democracy in America had been quietly superseded by oligarchy. It was a process that had been underway for decades beginning with legislative capture, elected representatives beholden to powerful private interests to the direct detriment of the public interest. From there the logical and lucrative next step was regulatory capture where regulated industry dominated the boards and tribunals charged with regulating these corporations. Then it progressed to executive capture, the guy who signed industry-friendly bills. The real prize, however, was the power of appointment of industry-friendly judges to dominate the Supreme Court from which the abominable fiction of Citizens United emerged. Lifetime appointments.

The vaunted protections of checks and balances, the very heart of what the Founding Fathers envisioned, neutralized. That's pretty close to a coup, one accomplished with the voting public none the wiser.

You don't want the plebs catching on and taking to the streets with pitchforks and torches. How do you keep them in line? Some you can deflect through voter suppression. Others you can radicalize with fear mongering and appeals to their base instincts. Do that well and they'll even reliably vote against their own interests, every time. Lyndon Johnson understood that frailty in white America.

America began as a social experiment in democracy, a democratic republic. Tensions always lurked beneath the surface erupting, almost a century later, in civil war. Today the country has entered what Hedges calls a "pre-revolutionary" state. The pot is on the stove, atop a burner set on "high."

Can America avert upheaval? Perhaps but I don't see how. It's the old scriptural business about "a house divided against itself." If a termite infestation is gnawing away in the right side of the house, how is the left side to restore it? Do you see any sign that the American people are just waiting for an epiphany?

While we're waiting to see how this plays out, it's a good time to revisit the history of Weimar. America in the 2020s is not Germany in the 1930s. History does not repeat itself but sometimes it rhymes. Haffner's diaries in "Defying Hitler" offer a rich look into how a society can fall victim to radical forces.

History tells us that all republics eventually succumb to the darker angels in their midst, Mound. It appears that the United States Republic is following the way of all the others.

Owen, Trump's big lie stems from a position that only white people should vote. According to a Vox publication, 57% of the white vote went to Trump. I'll add that most of the participants at the January 6th insurgency were white. RG

Thanks for the link, RG. Lots of white Americans simply don't trust people of colour. They view them as a threat to what they see as their position of privilege. That is the essential American illness.