It Was Just Tourists 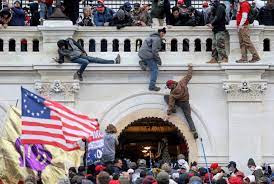 Of all the absurd claims about the riot at the American Capitol, the most absurd is the notion that it was a "visit by tourists." How has it come to this? Thomas Edsall writes:

Immediately after the riot, support for President Donald Trump fell sharply among Republicans, according to surveys conducted by Kevin Arceneaux of Sciences Po Paris and Rory Truex of Princeton.

The drop signaled that Republicans would have to pay a price for the Trump-inspired insurrection, the violent spirit of which was captured vividly by Peter Baker and Sabrina Tavernise of The Times:

The pure savagery of the mob that rampaged through the Capitol that day was breathtaking, as cataloged by the injuries inflicted on those who tried to guard the nation’s elected lawmakers. One police officer lost an eye, another the tip of his finger. Still another was shocked so many times with a Taser gun that he had a heart attack. They suffered cracked ribs, two smashed spinal disks and multiple concussions. At least 81 members of the Capitol force and 65 members of the Metropolitan Police Department were injured.

Yet, within a week, Republican politicians changed their tune:

The same pattern emerged in the Republican Party’s favorability ratings, which dropped by 13 points between the beginning and the end of January, but gained 11 points back by April, according to surveys by the NBC/Wall Street Journal.

Elected Republicans have simply followed the mob. And the mob will follow Trump to the gates of hell and beyond. They believe their shared brotherhood represents paradise itself -- because he and they hate the same things. From their perspective, January was just another visit by tourists.

They are, simply put, damned.

Due to a highly gerrymandered, antediluvian political system, the Rethuglicans departure from reality is currently the biggest global threat to human existence and NZ looks increasingly attractive.

NZ sees the world as it is, PoV. The Republicans are trying to construct a world that only they can live in.

The question is how this ends? It feels like an overinflated party balloon. Will it survive indictments by state (Georgia and New York) or federal prosecutors? It was reported today that the New York investigation into the Trump Organization is pursuing criminal inquiries. It's been rumoured that CFO, Allen Weisselberg has been cooperating. Now that the Mazars firm has been forced to hand over Trump's personal tax returns, they're in the crosshairs. Here's an interesting look inside that accountancy: https://www.propublica.org/article/meet-the-shadowy-accountants-who-do-trumps-taxes-and-help-him-seem-richer-than-he-is.

All the Quislings on Capitol Hill won't be able to help Trump if he's indicted.

The sooner the better.

Thanks for the link, Mound. There have been all kinds of people -- accountants and others -- who have shielded Trump for years. They're now trying to shield him from a commission to investigate what happened on January 6th. But, as the news out of New York indicates, the noose is tightening.

Gaslighting has always been one of Trump's go-to tactics and it looks like the party as a whole has adopted it. As for the news from NY about another criminal investigation, I'm not getting my hopes up. Vance already shut down one Trump Org. investigation in exchange for a paltry campaign contribution, and so far James is all talk. Wake me up when they perp-walk Papaya Pinochet out of his spider hole.

I wouldn't count the New York AG out, Cap. If she's threatening the Trumps with jail, she probably has pretty good evidence.