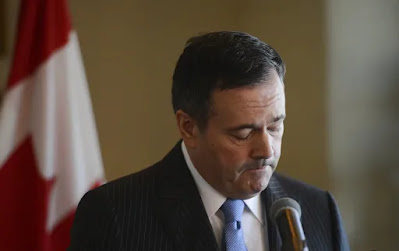 Damning the Kenney government as “out of touch and arrogant,” Loewen also quit as chair of the party caucus. “I feel it is best to resign this position to be able to speak freely.”

Loewen is one of the COVID 18, who have objected to Kenney's lockdown measures:

It’s important not to valourize Loewen. He is, after all, part of a group of mostly rural MLAs whose principal objection to Kenney is that the premier is imposing COVID-19 mitigation measures that, while still insufficient, are too strict for their taste. In other words, they’re significant contributors to the problems harming the province and causing the UCP to unravel.

That said, it’s a blistering and articulate letter that sounds as if Loewen spent hours getting the wording just right. The letter was posted just before midnight last night on Loewen’s Facebook account.

He extends the list of complaints beyond pandemic response to the government’s war on doctors, its coal development policy on the eastern slopes of the Rockies, which he said “did not align with the expectations and values of Albertans,” and its dealings with “a hostile federal government.”

“The caucus dysfunction we are experiencing is a direct result of your leadership,” he told the premier. “Messaging from your government has been contradictory, confusing, and needlessly inflammatory,” he went on, skillfully wielding an Oxford comma.

“The people of Alberta have lost trust in this government because you have not brought needed balance and reason to the discussion,” he continued. “These folks have not abandoned the principles and values of the UCP, but they have abandoned you specifically.”

One of life's inescapable axioms is that what goes around comes around.

I'm amazed that Albertans didn't smell a rat the minute Kenney showed up like a carpetbagger from Ottawa in a Dodge Ram pickup. And to think Alberta was once rat free...

That old saw about reaping what you sow seems appropriate, Cap.

Jason thought it was too easy when he saw Harper do it, but he didn't look close enough to know how long he should have stayed in the bushes while the other guys stabbed each other in the back. The first backstabber out of the gate loses sight of the injured bodies he thought he'd left behind and puts insufficient mind to the ones that took up a place in the bushes just after he left.

This is what comes of thinking you are the smartest guy in the room, Owen. Hubris often has very messy consequences.

I think Alberta needs another "new" party, Owen. After all, they have been changing their name ever since the old Progressive Conservatives morphed into the Social Credit Party, complete with the required "man of god" leadership/

Perhaps a more appropriate name for them would be "Opportunists R Us" or some such thing?

Jason's folks are ultra-individualists, John. Loyalty is not their thing.

The Greeks understood the problem, Lorne. Something tells me that Jason is not familiar with the Greek dramatists.

The name certainly fits, Lulymay. The real problem seems to be holding any Alberta party together.

Kennedy’s religion guides his option of being the smartest man in the room. The proof is his meddling in the new curriculum for the education department taking Alberta back to 1960. Anyong

A recent CBC programme documented the covid issues within the Tar sands projects.
Not only are the tarsands guilty of contributing to global warming but they , due to a medieval work camp ethic where most of the employees are contractors NOT employees are not entitled to sick days whenever they consider themselves compromised by covid.
This leads to Covid denial ism and thus infected workers upon shift change export their infections throughout Canada, or as the politicians like to say,from sea to sea to sea!

Like the other Harperites, Anyong, Kenney wants to turn back the clock.

That's the same kind of denialism that leads Donald Trump's supporters to claim that the events of January 6th were led by tourists checking out the Capitol, TB.