The Big Lie Is The Big Disease 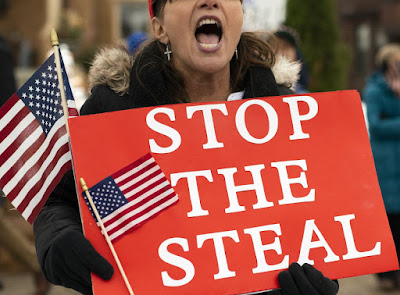 It has been remarkable to watch what has happened to the Republican Party. Tom Friedman writes:

Under Trump’s command and control from Mar-a-Largo, and with the complicity of most of his party’s leaders, that Big Lie — that the greatest election in our history, when more Republicans and Democrats voted than ever before, in the midst of a pandemic, must have been rigged because Trump lost — has metastasized. It’s being embraced by a solid majority of elected Republicans and ordinary party members — local, state and national.

“Denying the legitimacy of our last election is becoming a prerequisite for being elected as a Republican in 2022,” observed Gautam Mukunda, host of Nasdaq’s “World Reimagined” podcast and author of the book “Indispensable: When Leaders Really Mattered.”

In a two-party democracy, there can be nothing worse:

There is simply nothing more dangerous for a two-party democracy than to have one party declare that no election where it loses is legitimate, and, therefore, if it loses it will just lie about the results and change the rules.

That’s exactly what’s playing out now. And the more one G.O.P. lawmaker after another signs on to Trump’s Big Lie, the more it gives the party license at the state level to promote voter suppression laws that ensure that it cannot lose ever again.

Kimberly Wehle, a professor at the University of Baltimore School of Law and author of the book “How to Read the Constitution — and Why,” writing in The Hill on Monday, noted that “as of late March, state legislators have introduced 361 bills in 47 states this year that contain limitations around voting, a 43 percent increase from just a month earlier.

“The measures include things like enhanced power for poll ‘monitors,’ fewer voting drop-boxes, restrictions on voting by mail, penalties for election officials who fail to purge voters from the rolls, and enhanced power in politicians over election procedures.”

Although G.O.P. supporters of these bills insist that they are about election integrity and security, Wehle added, “the lack of actual evidence of fraud and mismanagement in the American electoral system totally belies those cynical claims.”

Donald Trump is a moron. But he's a monstrously destructive moron. He destroys everything he touches. And, in the end, he may destroy the republic.

The Big Lie is the Big Disease.

At some point in the future, once all of the nasty truths about Donald Trump sink in, that he will be seen as the greatest fraud ever perpetuated on the American people. A man of no leadership talents, zero redeeming qualities as a human being and so outright pathetic in the way he treats others, is the reality. Millions of Americans are still under his spell and living in a fog of denial that it will take years to finally break it. BC Waterboy

That seems to be the future, waterboy. The Trump Disease will take years to eradicate.

Is this how tribalism takes hold? Belief is more powerful than fact. Reality is deemed to be whatever the tribe chooses to believe, perhaps from one day to the next or one leader to the next. Reality is defined by narrative.

This is bad enough in a two-party system but I fear it is more dangerous in a multi-party politics where the support of fewer than two out of five delivers a powerful majority outcome which, of course, is where we are today. The last two majority governments in Canada were false majorities which, in terms of democracy, is not governance at all but rule of the majority by a minority.

The Angus Reid survey released this week found that 43 per cent of Conservatives believe climate change is a natural phenomenon. 17 per cent thought the whole thing a hoax. Add to that those who quibble over the degree to which it is anthropogenic and you have one of the only two parties to ever form government federally that has chosen to follow a narrative, not fact. The greatest threat to our country, all nations, and we're busy building stone walls and ramparts to divide us.

How can our country be governed when the dominant parties aren't speaking the same language. It's no longer a difference of opinion but irreconcilable realities. The common bond that underlies compromise and cooperation is gone. Distrust and enmity flows in to fill the void. Each side seeks to define the national identity by its supposed values to the exclusion of all others. We become a house divided against ourselves.

We have reached the point where there is no common ground between our parties, Mound. Unfortunately, democracy is predicated on the notion that common ground reflects the common good.

The GOP leadership has big problems with Liz Cheney calling out Trump's Big Lie, but no problem with Matt Gaetz sitting on the judiciary committee while under FBI investigation for child sex crimes. The party is profoundly sick.

It is indeed sick, Cap. It should be terminally ill. But stupidity and ignorance will keep it on life support.

The crisis/disease is wide spread. In view of what mound said in reference to our own political failings with the false majorities, the Cons broke all records for fund raising despite lagging in the polls. Who are the financial supporters of these losers?

Good question, zoombats. The answer seems to be that, in our system, money buys privilege.

What I find most disappointing is that the so-called left has abandoned the fight with it's constant push for political correctness, identity politics and woke (whatever that is). Here's a good description: http://babelonthebay.com/2021/05/02/green-with-envy-2/

The world is on the brink and they want to argue about nonsense. If an election were to be called today I'd probably stay home. I'd love the choice to click none of the above.

Thanks for the link, Toby. We're awash in distraction and red herrings.

The so-called left has become accustomed to the activity. It's easier to stick with something in your wheelhouse when you've become content in your role as a clock-watcher.

At some point in the future, once all of the nasty truths about Donald Trump sink in,


Yeh, right.
In too many circles the originator of conspiracy scandals , the 911 conspiracy, reigns supreme.
Whilst Elvis is not dead had mediocre traction Michael Moore's, 911, remains the cult of cults as it spawned so many offspring.
We have yet to experience the 'emperor has no clothes moment!
Remarkable we have turned in to!

correctness, identity politics and woke (whatever that is)

Woke is one of those all meaning or meaningless words that drives a directionless humanity.
It used to mean being aware , a worthy description.
Now it means anything you wish it to be pro or con.
It is but a continuation of Orwellian 'New speak.

We all seek our comfort zones, John. But sometimes being comfortable leaves you blind.

Watching the Us is like watching a slaw-moving train wreak for elections.

Every so often the USA criticizes an election somewhere. The presidential election of Evo Morales in Bolivia or Alexander Lukashenko in Belarus. Given the US' dedicated drive to corrupt its own voting system, why would anyone believe their remarks about a foreign election?

BTW, it looks like Morales was the victim of a US-inspired coup; Lukashenko probably, would have won an honest election---he was the "least worst" candidate-- but it was a totally rigged election.

In Huck Finn, One of the two con men says, "The fools are the majority in any town." Not much has changed, TB, since that novel appeared in 1885. Orwell understood that fools are at the mercy of unscrupulous wordsmiths.

The United States is no "shining city on a hill," jrk.