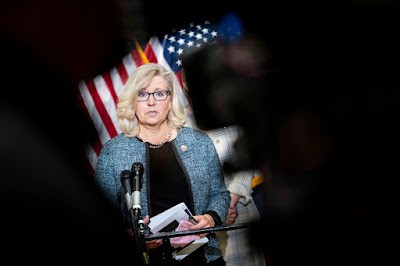 A civil war is being waged within the Republican Party. It appears that Liz Cheney will be a casualty of that war. But Conrad Yakabuski writes that the Cheneys settle scores   -- and they play the long game:

The Cheneys supported Mr. Trump in 2016 as the lesser of two evils, Ms. Clinton constituting, in their eyes, the devil incarnate. And during Mr. Trump’s term in office, Ms. Cheney voted in Congress to advance his agenda. But it is now clear she was biting her tongue all along.

The Cheneys began to reap their revenge against Mr. Trump even before the Jan. 6 Capitol riot that forever cast a stain on the Trump presidency and U.S. democracy. Axios reported that Ms. Cheney had been responsible for a Jan. 5 Washington Post op-ed signed by all 10 living former defence secretaries, including her father, that called on the country’s military leaders to reject any attempt by Mr. Trump to cling to power. Axios called it a “power play” by the Cheneys.

Ms. Cheney was hailed as a brave heroine for voting, along with nine other GOP House members, to impeach Mr. Trump following the riot he stood accused of inciting. By then, however, she had already declared war on Mr. Trump, so there was nothing particularly gutsy about her vote. It was just the next salvo in her war to reinstate the old guard atop the GOP.

She may lose this current battle. But don't count her out:

Ms. Cheney is playing a longer game than most of her House colleagues. While they fear Mr. Trump’s wrath in next year’s midterm elections, she is betting his influence over the GOP will soon wane. Privately, most Republicans acknowledge they are eager to move on from Mr. Trump. And his reign may increasingly look like an aberration as the GOP embraces its traditional stands on foreign policy and fiscal management, only minus the endless wars.

If she's right, lots of the present Republican house caucus could disappear -- along with Donald Trump.

The fact that Ms. Cheney is being held in high regard due to her heroic stand against Trump and the "big lie",one is reminded that perhaps the second "big lie" would be the one floated by her father, then Vice President Dick Cheney on the WMD leading to an invasion of a Sovereign nation. Then again the publics memory, or lack of it, is a very real thing.

The Republicans have been trading in lies for a long time, zoombats.

"And his reign may increasingly look like an aberration..." Yakabuski must be joking! There's no going back to the halcyon days when Dubya bumbled around creating wars and torturing people at black sites around the world.

As Karl Rove said, "We're an empire now, and when we act, we create our own reality." Once your thinking is no longer bound by reality, the most absurd conspiracies find fertile ground. As Liz is finding out, Republicans prefer the idea that Trump won the election to the reality that he and they are pathetic, seditious losers. And they've got Fox, OANN, Newsmax and Facebook telling them what they want to hear everyday.

I increasingly feel that the United States is a failed state, Cap. If Cheney rescues it from Trump, what she would put in its place could be equally toxic.

Although it plays well with supporters today, the fact that Republicans boldly and baldly proclaim that their only interest is in regaining power, no matter at what cost, would have been an indictment of absolute moral bankruptcy not so long ago, rendering them, in the electorate's eye, unfit for office.

It is interesting Owen, I've always considered the "Devil Incarnate" was none other than Dick Cheney and his cohorts Rumsfeld and Wolfowitz are equally evil. Hilary Clinton is certainly unsavoury, but the GOP is awash with many more deceitful scumbags. Is this the new normal? RG

There was a time, Lorne, when what Republicans are doing would have been seen for what it is -- the quest for raw power. The fact that it no longer is perceived that way is an indictment of how our political language has been corrupted. Orwell knew exactly what this is all about -- the defense of the indefensible.

I increasingly feel that the United States is a failed state,

I don't think it is quite there yet but it is increasingly looking like Spain in the middle to late 1600's, a fading world power hollowed out by foreign wars and a collapsing internal economy.

All empires eventually come to an end, jrk -- and the end is never pretty.

All empires fail.
Canadians should be concerned that their southern neighbour will take them with them!

You know things are really bad when an evil reprobate from the Cheney lineage is held up as a principled figure for just, I don't know, acknowledging an obvious truth, when in fact her idea of replacement is far worse than a bumble head like Trump could ever pull off. That's more on point what makes the country a failed state, when a simple truth makes one a hero. She is no friend of the average American citizen and would hands down let them eat cake than do anything to make their lives better. BC Waterboy

Precisely, waterboy. When a country makes a hero out of yet another villain, it is in deep, deep trouble.

You fooled us once shame on us...
Actually its Americas legacy.

Karl Rove -- George W's guru -- had disdain for what he called "the reality-based community," TB. On the Republican side that disdain has only grown.