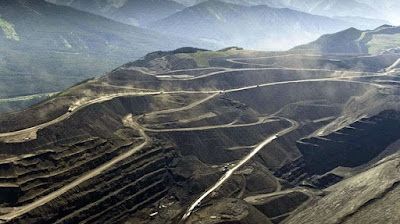 The Grassy Narrows Project is a proposal to establish open-pit coal mining in the southern Canadian Rockies. A panel will soon decide whether or not to approve the proposal. Andrew Nikiforuk writes:

If the panel gives the contentious metallurgical coal mine a green light, the doors could open for other existing proposals that could industrialize nearly 1,000 square kilometres of the Rockies and threaten the region’s scarce water supplies.

Much hinges on the panel’s report and recommendations that will be submitted to federal Minister of Environment and Climate Change Jonathan Wilkinson next month.

Unsurprisingly, Jason Kenney is a full-throated supporter of the project:

For starters, the Alberta government of Jason Kenney has strongly championed Australian metallurgical coal developers as an important new source of jobs and revenue that could replace shrinking oilsands developments in the province.

All the steel-making coal would be shipped to Vancouver-area terminals for export to China or India.

In addition, the province and the Coal Association of Canada, directed by former Alberta Tory environment minister Colin Campbell, have tried to sell open-pit coal mining as a form of “reconciliation” that can enrich First Nations.

Meanwhile, the Kenney government hopes the Grassy Mountain Coal Project, owned by right-wing political activist and Australian billionaire Gina Rinehart, will be the first of eight proposed mines in the watershed of the Oldman River which, in turn, feeds the South Saskatchewan River.

As the market for Alberta oil dries up, Kenney is betting that Asia will buy up huge chunks of Alberta carbon.

Keep your eye on this one.

Email ThisBlogThis!Share to TwitterShare to FacebookShare to Pinterest
Labels: The Grassy Narrows Project

This has been a bone of contention in Alberta for months as ably reported on the Alberta Politics blog.

The reaction from locals who would normally be UCP supporters has been overwhelmingly negative, and delayed kenney's idiotic plans. He and harper are the supporters of low tech shovel-ready projects to keep peons employed. Why bother future-proofing Albertans in a sustainable way? That's hard work.

kenney has been all for selling off provincial parks and desecrating the environment of the southern foothills. But then what would you expect of such an ideological cuss? The royalties on coal are amazingly low, just $7K for the first project. Yet the potential to contaminate watersheds and subsequent rivers with heavy metals from headwaters like selenium is very high, to say nothing of blighting the landscape with cut off hills and open pits. The Aussie woman doesn't give a brass monkey's about the environment, she just wants to get even richer and get out before things turn awful.

It's 2021, yet kenney acts as it were a century earlier. Bugger public health on Covid or consequences of coal mining or tarsands excrement, fight the doctors, fire teachers, rewrite elementary school history into a fairy tale on indigenous issues, appropriate pension funds and generally act the compleat right wing arsehole. kenney to a T.

Let's hope the federal review is negative so that kenney can jump up and down like the would-be little tinpot dicktater he fondly imagines himself to be, and dun Trudeau. I and a fair few others can stomach that more than unnecessary coal mining and its implications.

If the panel rules against Kenney, he'll holler, BM. But empty barrels always make the most noise.

The world's largest coal mining company, Peabody, filed for chapter 11 bankruptcy in 2016 citing low prices and demand for coal. It has since emerged from bankruptcy as a much smaller company, but the underlying problem remains the same. Time for Alberta to stop hitching its future to dying industries, especially heavily polluting fossil fuels.

I believe that Lethbridge, Alta gets its drinking water from the Oldman River of which the city sits on. It's a place I'm quite familiar with. I wonder what the 100,000 residents think about what might happen to their source of water.

Not saying anything about this is ethical, but why do Canadians have to sell our natural resources to foreign companies to begin with? What is wrong with us? We cannot produce anything for Canadians by Canadians? Imagine going back to the 1800’s to produce heat! There are those who espouse coal has new technologies that makes coal cleaner...what a friggen dirty joke. Souther Alberta is very near desert conditions and that garbage will be flowing into the South Saskatchewan river. It is the only water that exists in this area. My message to his nickers in Edmonton is, get your head out of your brainlessness and THINkK THE FUTURE and STOP blaming Ottawa for all your troubles. You have the opportunity to make this a province everyone would want to live in. What is the problem with you Conservatives? All you think about is making yourself famous and your friends wealthy. This country could be the envey of the world but no....all you politicians are jurkabouts. ANYONG

Regardless, the presumption is.. via massive train cars
such coal will ship from Vancouver
transit the Salish Sea and sail off to Australia

It's as if we've forgotten how to make Canadian steel
Or grow wheat .. So we produce Arms & Weapons instead
as the fisheries become dead

Good question, perfect. Getting rich can be the source of poison.

Kenney still thinks of us as hewers of wood and drawers of water, Anyong.

This is really about a death wish, sal -- a societal death wish.

If you want to know what makes Canada tick, read this 2017 Guardian article titled: Toronto's buried history: the dark story of how mining built a city

Most Canadians underestimate the huge fortunes a few have made in mining and the resulting political power mining and these few individuals have. But they certainly are not advertising this. Peter Munk for instance I only knew as the donator of a mind boggling amount of money to the Peter Munk Cardiac Centre at the Toronto General Hospital and the Munk School of Global Affairs at the University of Toronto. I was quite surprised to find out that he was the founder of the world’s largest gold-mining company.

Mining is not an industry in Canada; it is the industry. Its influence is so overwhelming that it makes Canada closer to an oligarchy than a democracy.

Quite true, ffd. And our mining countries are now raping the geographies of many other countries besides our own.