Ford's War On The Environment 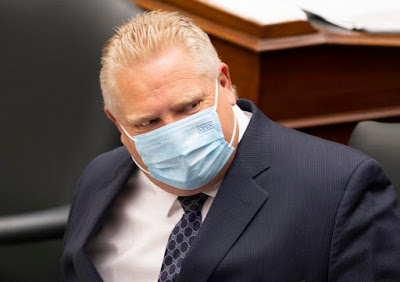 Under the cover of the COVID emergency, Doug Ford is selling out the environment. Martin Regg Cohn writes:

Under cover of COVID-19, Premier Doug Ford has been selling out the environment and selling it off to the highest bidder with underhanded tactics:

Environmental issues transcend the merely political and ideological. For this premier it is pathological.

He will be remembered as Ontario’s least green premier in a generation — going back to the days of his now notorious predecessor, Mike Harris.

Ford is leading a three-pronged attack on Ontario's environment:

It begins with the loosening of the Greenbelt, a band of protected farmland, forests, rivers and lakes. Ford has outdone himself by recycling a defeated, Harris-era politician named Norm Sterling to head the Greenbelt Council.

Perhaps no one else could be found to fill the big shoes of the previous Greenbelt Commission chair, former Toronto mayor David Crombie. A former federal Tory cabinet minister, Crombie resigned in protest last year over the Ford government’s meddling by issuing a call to action:

This is high-level bombing and needs to be resisted.”

Crombie’s reputation as Toronto’s “tiny perfect mayor” lives on. By contrast, Sterling is coming back from the political dead with his stature infinitely diminished.

The second part of Ford's assault has been his crusade against carbon pricing:

By dismantling the existing “cap and trade” program he automatically triggered a federal carbon levy at the pump to make up for the province’s non-compliance.

Thus, our allegedly anti-tax premier got us the “carbon tax” we’d never had (cap and trade was working well). Then our supposedly penny-pinching premier budgeted $30 million to challenge the federal levy, hitting every taxpayer in the pocket.

This week the federal government stepped in, bigfooting Queen’s Park with an environmental assessment for Hwy. 413 that the province couldn’t bring itself to do properly. Ottawa’s intervention contrasts sharply with Ontario’s determination to fast-track the route that would raze 2,000 acres of farmland and pave nearly 400 acres of protected Greenbelt land in Vaughan.

Add all of this to Ford's response to COVID, and the picture becomes crystal clear. Ford is simply incompetent -- a danger to the public health and the public good.

Email ThisBlogThis!Share to TwitterShare to FacebookShare to Pinterest
Labels: Ford's Attack On The Environment

Cons like Ford deny that there is such a thing as "public good." The public good never built anyone's campaign war chest, paid for astroturf groups like Ontario Proud or provided cushy sinecures for incompetent friends and family members. Why would anyone be interested in the public good?!

Let's give him an "A" for effort. As hired help goes, he's giving it a good try to be competent enough for the interested parties he reports to. Meanwhile, while Minister Fullerton takes the flak on the Covid file, he can climb into his truck and hide behind Paul Calandra's latest comedy act while awaiting a fond wink from Chainsaw Mike and a few more from the land-grabbers. The size of the smirk on Mike's face must be record breaking.

I've always loved these guys. I might just be laughing at myself, but they make me do it when I really don't want to.

Like Maggie Thatcher, Cap, Doug believes that "there's no such thing as society."

This would indeed be funny, John -- if it weren't so serious.

With the passage of time I've come to believe that the majority of the supporters of conservative politicians are hopelessly stupid and insane.

I like to quote John Stuart Mill, thwap: "Not all conservatives are stupid. But most stupid people are conservatives."

One question. What would it take for Ontario voters to give the PCs another term in office?

Good question, Mound. I suspect that it would take a severe case of collective amnesia.

If she can garner a majority, John.

I'm glad to see that humour is still alive and well. This thread is one of the best and all the quotes by Thwap, Owen, and the Mound were all beating me to the punch.We are all, I'm sure incredulous at the history of Ontario, Canada and even the world conservatives approach.But the past has led me to believe that I am reflected in this favourite quote

"A cynic is a man who, when he smells flowers, looks around for a coffin".

Menken was pretty cynical, zoombats. He christened a large part of the American population "The Booboisie."

Ford has never been a fan of education, jrk.

Why is it a problem to find people who have the interests of Canada and the good of the people within Canada first and foremost in building a country like no other except for Norway perhaps...instead of filing their pockets with Canadians money without any consideration for the world that feeds them. What does Duggie boy think he will eat or for that matter ...Drink ????Andong

Good question, Andong. It's all a matter of priorities.