The Saga Of Rudy Giuliani 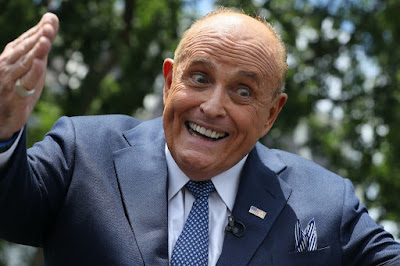 Rudy Giuliani is in it deep -- really deep. George Conway writes in The Washington Post:

In law and in life, things have a way of coming full circle. The quoted words come from the former president’s supposedly “perfect” phone call with Ukraine’s president, and described what could happen to the American ambassador there, Marie L. Yovanovitch. It was Giuliani’s relentless efforts that got her recalled.

The arc of Giuliani's career has been remarkable:

The work Giuliani has done for Trump has exposed him, Conway writes, as "one of the world's worst lawyers:"

The former first client wasn’t too thrilled about that. But he ought to be even more ticked about what came next: not one, but two, impeachments, both Rudy-enabled. Nobody — other than perhaps the impeachee himself — did more than Giuliani to get his client charged with high crimes and misdemeanors.

And the screw-ups keep coming:

According to a transcript published last week of a Giuliani phone call with one of the Ukrainian president’s top aides, it was Giuliani who first urged the Ukrainians to announce a bogus investigation of Joe and Hunter Biden so Ukraine could have “a much better relationship” with the United States. It was Giuliani who told the media that his Ukrainian adventure “isn’t foreign policy,” but was meant to “be very, very helpful to my client.”

Donald Trump claimed that he would hire "all the best people."

I get the impression that the US political/legal scene is degenerating into a farce. This is really scary. Despite everything, the US is one of the major economic and military powers in the world. Unfortunately the players no longer understand reality. And yes, I include Biden and his foreign policy advisors.

Giuliani may even been relatively sane when he went to Ukraine but it degenerated after that. Perhaps, as an innocent American, he had not anticipated running into even more crooked people than he dealt with in New York. Ah, Innocents Abroad.

Like Matt Gaetz, Giuliani was counting on a blanket presidential pardon. But Trump being the full diaper that he is didn't deliver.

I read that Rudy's now making increasingly frantic calls to Mar-a-Lago trying to get his fees paid for all the court cases he lost after the election. Good luck with that, Trump wrote the book on stiffing contractors. At this rate, Rudy will have the likes of Sidney Powell and Lin Wood defending him pro bono.

Donald Trump has never had a firm grasp on reality, jrk. The virus he hosted has now overtaken a huge swath of the population. The Big Lie has become the Big Infection.

Giuliani apparently owes his third wife $40,000 a month in alimony, Cap. She's one of three exes. Imagine the cash flow he has to generate just to keep up with his bills.

I always look forward to any public appearance by Guiliani, Owen. During these fraught times, I take my comic relief where I can find it.

Giuliani has become a one-man clown show, Lorne. All he needs is a round red nose.

I wonder how Giuliani "ends." He's now jettisoned most of his entourage, even settling for a part-time chauffeur. It sounds as though Dominion has most of these culprits well and truly in its crosshairs - FOX, Hannity, Newsmax, Giuliani, Sydney Powell and anyone else who spread the lie about rigged voting machines.

The cadre of former senior US attorneys on CNN and MSNBC think Rudy will be under unbearable pressure to flip on Trump who really should have pardoned the guy.

How stupid were these people. Did they believe the 1st Amendment afforded them some blanket immunity to blatant defamation? I hope Dominion leaves them bleeding from the eyeballs.

My hunch is that Dominion will harvest several pounds of flesh, Mound.

Giuliani's career has been a slow motion, self inflicted train wreck off a steep cliff. Not too many years ago while studying leadership in my MBA program, we did a case study on the guy, tapes of meetings and all. This was around the time things started to unravel and I thought they had really scraped the barrel for profiles in leadership. I can assume that the module quietly has now disappeared. Get out the popcorn for the big flip as this (should) all but ensure a Trump indictment and an end to his 2024 fantasies. Time for the GQP to find a new hero. BC Waterboy

An indictment of Trump might force the GOP to rethink things, waterboy. At the moment, though, they are as insane as Trump is.

How is it that nobody remembers this episode of Rudy's life?

That video is disturbing. That he would do it at all, and then either request or allow Trump's involvement, might be very revealing to a mental healthcare professional, particularly in view of what's been happening recently.

I thought Rudy was well into the process when he started blathering about "Saul Alinsky radicals" during his candidacy for the 2008 presidential nomination.

Both men are delusional, John. And they've been delusional for a long time.