Drowning In Our Own Waste 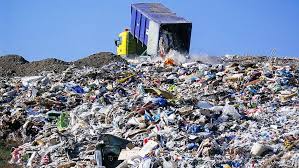 Global warming is a clear and present danger. But, Andrew Nikiforuk writes, another crisis is around the corner -- global hoarding:

Human-engineered structures and gadgets from cities to cellphones now represent an enormous mass weight of nearly 30 trillion tonnes on the planet, or vastly more than the world’s forests or life in the oceans.

Scientists call this artificial system created by humans over the centuries “the technosphere,” and they say it is growing and evolving at a rapid rate.

In contrast to the mass of 30 trillion tonnes created by humans to support technological societies, the total live biomass (animals and plants) on Earth equals about 560 billion tonnes of carbon.


So while we try to limit CO2 emissions in the atmosphere, we increase them in the technosphere.

Professors Jan Zalasiewicz, Mark Williams and Colin Waters from the University of Leicester Department of Geology, along with a team of global contributors, also concluded that the planet’s technosphere is now so extensive that it could cover every square metre of the Earth’s surface with several inches of human detritus weighing an average of 50 kilos, or 110 pounds.

This human-engineered skin would include aluminum, concrete, plastic, fly ash and fallout from nuclear testing across the planet.

The technosphere is composed “of the structures that humans have constructed to keep them alive, in very large numbers now, on the planet: houses, factories, farms, mines, roads, airports and shipping ports, computer systems, together with its discarded waste,” Zalasiewicz said.

Incredibly, technological flotsam ranging from ballpoint pens to transistors now outnumbers the fossils of creatures that once roamed the earth.


We human creatures have always created a lot of garbage -- on earth and in space. We may, indeed, eventually drown in our own waste.

The source for knowledge about our ancestors is the junk they left behind. Our behaviour hasn't changed, only multiplied.

I'm a bit puzzled about the tone of Nikiforuk's article. Everything humans have made was manufactured from materials found here on earth. All that stuff just has new shapes but it was always here. We didn't create aluminum, for example; we extracted aluminum from bauxite and turned it into beer cans and air planes. Most of our stuff is just changed shape or constituency. We moved out of natural caves when we learned to make substitutes which eventually became sky scrapers; their function is the same, protection from the elements.

What is problematic that we have managed to change or collect some stuff so much that it is toxic to us, to wild life and/or the environment.

Maybe the point is that there are too many of us and our junk is piling up.

It's certainly true that, as the population increases so does the garbage, Toby -- unless we reduce, reuse and recycle.

There are too many of us, Toby, by a factor of two that could rise to three by mid-century. Yes, we haven't "added" 30 trillion tons to the biosphere. It was all there in some other form prior to the ascent of mankind. It's a different form of spoor or scat only most of ours isn't biodegradable.

Programmes that depict impoverished societies often feature a scene or two of the poor scavenging garbage dumps and landfills for metals, etc. that they can sell for a few coins - a basic form of recycling. What of our landfills? When will we have to "mine" them for their discarded treasures?

It's not just that we're consuming resources at a plainly unsustainable rate. The crisis lies in our total dependency on unsustainable consumption at rates that keep growing by the year. Our inability to break this lethal addiction to ever more is manifest in rivers that no longer run to the sea; algae blooms from agricultural runoff; deforestation; the collapse of global fisheries, one after another; the loss of biodiversity; and desertification - the exhaustion of once arable farmland and its transformation into sterile desert.

Governments, stumbling around for gestural responses to climate change, haven't begun to acknowledge much less address these other existential threats, especially overpopulation and excess consumption and waste. The great dilemma is that you cannot solve one of them, not even climate change, without finding solutions to them all. The good news is that there are solutions for all of these things based on the common threads that run through them all. The bad news is that they demand a restructuring of our now global civilization of the magnitude that mankind has never demonstrated any willingness to accept, at least not while there's still time to act.

Add to that the fact that a significant number of us are in denial, Mound, and we have a problem that seems as insurmountable as those mountains of garbage.

It's sad, Dana, that so many of us measure our self worth in precisely those terms. Sheep to the slaughter.

Interesting suggestions, Steve. But not easy to accomplish.