Light In The Tunnel 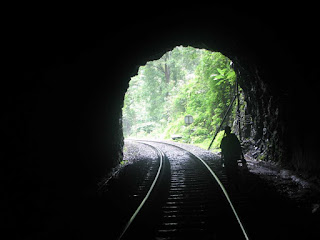 No one should be writing obituaries for the NDP. Michael Harris writes that, even though Justin Trudeau's personal popularity remains high, his party's brand is slipping:

Small wonder, with so many of his ministers stepping in cowflops. Natural Resources Minister Jim Carr told worried businesspeople in Calgary that the police and the military would deal with any civil disobedience by anti-pipeline protesters. This was not music to the ears of First Nations chiefs, or environmentalists, or anyone who has been watching the debacle of Standing Rock. The Liberals apparently have forgotten that it was the Harperites who saw these people as terrorists. Carr’s subsequent backflip was unconvincing.

And with the PM presenting himself as a champion of youth, Finance Minister Bill Morneau invited young Canadians to prepare for a future of short-term contract positions and “job churn” — otherwise known as living hand-to-mouth. Remarkably, Trudeau picked up on this hopeless, defeatist message when he told a youth labour forum that precarious work is now a fact of life.

No wonder they booed him. Youth unemployment is double the national average; after a year of Trudeau, and despite his promise to create 125,000 new jobs for young people annually, that number remains stubbornly high.

Moreover, some of Trudeau's recent moves have angered some of his strongest supporters:

The plundering and blundering of the cash-for-access fundraisers has up to now been restricted to rhetorical volleys against the government in QP. But now Ethics Commissioner Mary Dawson has decided she’s heard enough: She plans to personally interview the PM to see if he put himself in a conflict of interest by mingling with corporate aquarium-suckers seeking influence with ministers at political fundraisers for $1,500 a pop. (I hope he has better sense than to tell her that he attended these mating rituals for lobbyists to “champion” the middle class.)


And his decision to green light Kinder Morgan certainly looks to the past, not the future:

While Trudeau is expanding tar sands projects, others are dropping out, in part to go green. Statoil, the Norwegian oil giant, is dumping its Canadian assets. The company spent US $2.2 billion for its tar sands lease in 2007; it is selling it for $832 million Canadian.


So, light is appearing at what has been a dark tunnel for the NDP. But who the party chooses as leader will make all the difference.

Image:Like Success
Posted by Owen Gray at 9:28 am

Email ThisBlogThis!Share to TwitterShare to FacebookShare to Pinterest
Labels: The Future of The NDP

"Electronic monitoring equipment failed to detect a pipeline rupture that spewed more than 176,000 gallons of crude oil into a North Dakota creek, according to the pipeline’s operator, about 150 miles from the site of the Standing Rock protests."

When the leaks occur -- and they will -- Mr. Trudeau will have a lot to answer for, Hugh.

My own prediction is that many Canadian voters will have a short memory and vote Conservative; this is a two party country. Right? I hope I'm wrong.

The NDP, both nationally and provincially, needs to wake up. The NDP supporters I meet are either old 1950's socialists or flakes who wear crystals for their health. Etc. I see and hear nothing from the NDP that indicates any sense of direction.

The NDP has been lying low since the election, Toby. They have an opening. But their new leader will make all the difference.

If the NDP is to experience any real resurgence in popularity, Owen, it needs first to redefine itself. Too many (and this is especially true of the party in Ontario) see a party of expediency, not principle. One hopes that whoever is chosen to lead next will have some courage of conviction.

The Neo-liberal virus has affected all three of the major parties, Lorne. It continues to be exposed as a fraud. Those who insist on selling it will pay a price at the ballot box.