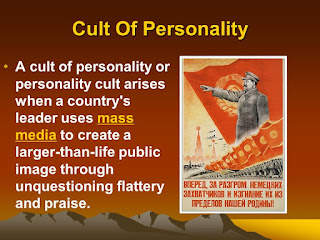 Andrew Coyne writes that the Conservative Party has reached a fork in the road. It can, he writes, either be a party of big ideas or small fears:

Will it embrace the conservatism of Reagan, Thatcher and Mulroney — or the know-nothing populism of Donald Trump, his imitators and idolators?

Clearly, Coyne would prefer that the party be disciples of Thatcher, Reagan and Mulroney rather than Trump. But there's a problem. Thatcher, Reagan and Mulroney's ideas are failed ideas. And the fears  people like Kellie Leitch and Chris Alexander are fanning are not small. Now Leitch wants women to  legally be able to carry pepper spray. There's a reason she's now being referred to as Dr. Pepper. More worrisome is the clear indication that she is casting her lot with White Supremacists.

I would say that the Conservative Party is fighting for its soul, Owen, except that it lost that battle years ago.

Conservatives have been hollowing out society for forty years, Lorne. They have now turned their attention to the organizations that nurtured them.

Andrew Coyne more then any other journalist Owen vociferously promoted Harper's neoliberal agenda. I see he is still promoting it.. I agree with you totally,that it is Harpers party.
He built it, he ran it and he dictated its policies completely.

I find it dispiriting that Coyne seems to want to revisit the era of Thatcher, Reagan and Mulroney, the trio who launched that witches' brew we know as neoliberalism. We've had three decades to watch it hollow out one nation after another to the point where even the WTO and IMF cried "uncle" and yet Coyne's prescription is more of the same. There's something revelatory in how across the political and journalistic ranks neoliberalism remains deeply embedded.

Its ruins of neo-liberalism are everywhere, Mound. And still the so called "best and brightest" sing its praises.

I have some regard for Andrew Coyne, though while in my opinion as unenlightened as the rest of his cult, as one of the more forthright voices of market libertarianism and I'm aware that this isn't the first time that he's stated his view on this subject. But I don't think he gave it the attention that it deserved when it might have mattered. The parties of free markets and limited government, both in Canada and the US and whether sincerely or with calculated cynicism, have been cultivating relationships with the forces of organized bigotry and making use of their considerable electoral heft and resources for at least two generations. Because I know that Mr. Coyne isn't stupid, I have to question whether he was a supporter of the strategies that were contrived to shape the libertarian/theo-con coalition and that, through recent efforts of many within the party and including some candidates for leadership, are continuing to debase our political culture; or whether it happened that he just wasn't looking.

Let's see what Andrew has to say after parameters derived from some observation of continuing developments in both of our countries have been factored into the current set of calculations.

Coyne has never made excuses for political corruption or stupidity, Bill. He just continues to believe in that old time religion.

Agree with @John B in that I always listen to Andrew Coyne because I admire his intelligence and his occasional foray into what "might have been done differently". Having said that, it seems that Andrew was vaccinated with that Conservative needle when he exited the womb and cannot ever see beyond that. Pity, because he is capable of so much more if only someone could provide an antidote. I despair at all these talking heads that have no concept of the premise that you must dig deep and look at ALL the facts before pontificating their bla bla bla simply because someone has put a microphone in front of them.

I want truth and I want truthful analysis, no matter what political party is the "party of the day". As long as we allow politicians of any stripe who lay in the bosom of Corporate Canada, we are the moral minority are doomed.

Like you and John, Lulymay, I admire Coyne's intelligence and independence. To his credit, he publicly disagreed with Paul Godfrey's editorial policy during the last election. But, as the American journalist David Halberstam wrote of the architects of the Vietnam War, the best and brightest can get it terribly wrong.

There's a conservative polity out there but there doesn't seem to be a mutually agreed party for them to join. I too recognize Reaganism/Thatcherism/Mulroneyism as an important mile-stone: the beginning of neo-rightism and the beginning of the end for Toryism.

It would be trite to attribute the demise of the federal Progressive Conservatives to the neo-right movement alone; Manning, Bouchard, Meech and the Charlottetown all played there parts in delivering the party with two back-to-back, record-breaking majorities a humiliating re-elction of just two MPs.

Neither would the tumult on the right be properly understood without acknowledging Jean Chretien's deft toying with the Reform-a-CRAP-Alliance fragment of PC jet-trash: it licensed a wave of (self-)righteous outrage among the right (whose frustrations were all too manifest in the hapless Stockwell Day's Official Opposition), fomenting a maudlin narrative of unfair treatment and unjust deprivation of a mythological heroic age of conservatism---whenever that was.

David Orchard dropped off the PC leadership ballot on the condition MacKay, who thereby won the contest, not join the PCs to the Reform-a-CRAP-Alliance party---a promise MacKay wasted no time in breaking. Harper thus amalgamated two humiliated factions of conservatives by treachery, which doubtlessly disaffected a considerable number of PC members; the resulting new Conservative party had now been rendered down to the point of extreme factions gaining significant influence.

When the Liberal party executive illegitimately appointed Ignatieff leader (instead of the membership electing him), Liberal support which'd been tepid under Martin collapsed even further, a phenomenon which probably obscured how many of this surfeit of disaffected voters were Liberals or PCs (the NDP benefitted temporarily). Harper did not, contrary to Con theology, slay the Liberal dragon---but he did avail the moderate-voter-vacuum by default: from the beginning Harper's Cons were largely considered far right of moderate, which showed in his two initial minorities and the single, frustrating majority.

Like all neo-right governments, Harper had a special mission to sabotage potential democratic interference in profiteering which he pursued to the exclusion of all else, including the building of a real conservative party. While nurturing a cult of ruthless single-mindedness that tolerated no dissent, he alienated the religious right by ignoring them, likewise traditional support from the military, and generally the same with national patriots who bridled under Harper's now-overt dismissal of sovereignty (by way of sleazy trade deals). He recruited young sycophants who were encouraged to neglect ethics
without question---but not enough to replace the attritting, geriatric "base". Thus, what moderates that remained by this time were disappointed that the immoderate stance of two minorities wasn't ameliorated by winning a majority, as was often promised. In sum, Harper drove out moderates and recruited only the unethical---and still in insufficient numbers to replace natural decrease.

Hence Harper left a moribund, special-purpose, stitched-together frankenstein party of various conservative body-parts, most moderate ones already sifted out at the start, the remainder exiting over nine years of distinctly un-Tory, anti-sovereign and unpatriotic government. Today the remnant extremists are discernible in the sludge when they dance to Trump's tune of intolerance.

There must be conservatives out there somewhere, they just don't have a real conservative party to join. Harper's was conservative only to the extent it kept the few moderates it usurped from the PCs---in the end even these left.

An astute analysis, Scotty. Certainly Edmund Burke and John A. Macdonald wouldn't recognize those who call themselves conservatives as conservatives. But Ayn Rand would recognize her offspring immediately.