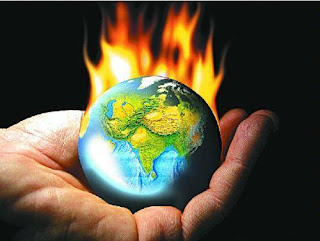 Yesterday, Canada's first ministers met to finalize a strategy for fighting climate change. The plan puts a price on carbon -- and, as of now, the price is too low. Tom Walkom writes:

Experts I’ve talked to say if Canada hopes to meet even the minimal targets it agreed to at the Paris climate-change conference last year, it would have to implement a price of $30 per tonne now — rising to $200 by 2030.

That’s because the whole point of carbon pricing is to encourage people to use less fossil-fuel energy by making it more expensive.

But [the plan] hasn’t gone over as well at home. A poll earlier this fall estimated that a striking 63 per cent of Albertans oppose her carbon tax plan, which is expected to cost the average family $433 in the first year.

Opposition to the carbon tax was also the rationale for last week’s lock-her-up rally in Edmonton, where demonstrators called for Notley to be jailed.

It will cost money to stop global warming. The jury is still out on whether or not Canadians are willing to pay what it will take.

Email ThisBlogThis!Share to TwitterShare to FacebookShare to Pinterest
Labels: The Cost Of Stopping Global Warming

British research indicates an average car creates about 5 lbs. of CO2 per litre of gasoline. That's one ton of CO2 for 400 litres or 8 fill ups based on a 50 litre tank. Even at $30 per ton that's still under $4 extra per fill up.

They're still going with the idea of making it revenue neutral. That raises two problems. To say that government will hold that levy and return it is fanciful. Yes, the government may disburse it but, when it comes to hand outs, they're likely to send it where it will best serve their partisan political interests. They take my money at the pump and then pass it along to some entity other than me.

The second problem is that governments need that money to fund climate change adaptation measures whether replacing or reinforcing existing aging infrastructure or building new projects such as flood spillways. Our CO2 emissions are a prime culprit in changing our climate so that existing infrastructure is no longer suitable so why shouldn't future emissions be taxed to fund the expense?

The problem as I see it, Owen is that they should never have labelled it a Carbon "Tax" as all ReformaCons hate anything called a tax. Change it to a "Fee" and they will all be on board. The ReformaCons just loooove Fees! As do the Faux Libs in BC.

Instead of getting private investors to rebuild infrastructure, the carbon tax could help create infrastructure for a green future, Mound.

Their mantra is, "All taxes are bad," Lulymay. There's going to be a cost. But tax is a dirty word.

That will be hard for lots of people to accept, Hugh -- unless the tax isn't levied at the pump. But there's still a problem. What it comes down to is this question: "How much are Canadians willing to pay to fix the problem?"

Politicians repeat no end of inanities and the uncritical masses just believe. A while back Trudeau insisted that climate change would not happen tomorrow. Hey Justin, climate change is already here and the evidence is all around. On the radio this morning Christy Clark touted that the electricity from Site C will be "100% clean energy" which is patently untrue. There are always trade-offs and maybe there's a case for Site C but don't feed us pap. Last night Clark was promoting BC's carbon tax while saying that it was returned in tax cuts. Huh? What's the point? A carbon tax should hurt enough to make us all change our behaviour. Brad Wall is against any . . . ; need I say more? And, of course, they all talk about new pipelines for oil and refuse to say dilbit or diluted bitumen which is what the new pipes are for.

Owen, I don't have much hope for the future as long as the majority refuse to think critically, as long as they allow their political leaders to spout nonsense.

@ Mound.
British research indicates an average car creates about 5 lbs. of CO2 per litre of gasoline. That's one ton of CO2 for 400

Carbon taxes will not work whilst we take with one hand and give back with the other!
We are subsidising oil and gas with carbon tax!

The tax is supposed to be a disincentive, T.B. If the money is used to build highways, it will wind up subsidizing the fossil fuel industry. If it subsidizes green energy projects and brings down their costs, we may make progress.

I just saw a poll of Trump voters, Toby. What they believe is directly contradicted by the facts. But, if the facts don't matter, we're in deep, deep trouble.

With Trump in charge of Merica, we need to have a revenue neutral carbon plan. The Dion promise.

It's interesting, Steve, that at least some people are giving second thought to some of Dion's ideas.