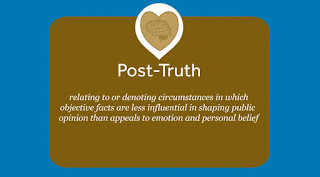 Several commentators have suggested that the ascension of Donald Trump marks the beginning of the Post Truth Era. George Monbiot writes that, in fact, we have been living in the Post Truth Era for some time now. Over the past fifteen years,

I have watched as tobacco, coal, oil, chemicals and biotech companies have poured billions of dollars into an international misinformation machine composed of thinktanks, bloggers and fake citizens’ groups. Its purpose is to portray the interests of billionaires as the interests of the common people, to wage war against trade unions and beat down attempts to regulate business and tax the very rich. Now the people who helped run this machine are shaping the government.


Consider, most particularly, those who have battled the idea that the climate is changing:

The fury and loathing directed at climate scientists and campaigners seemed incomprehensible until I realised they were fake: the hatred had been paid for. The bloggers and institutes whipping up this anger were funded by oil and coal companies.

Among those I clashed with was Myron Ebell of the Competitive Enterprise Institute (CEI). The CEI calls itself a thinktank, but looks to me like a corporate lobbying group. It is not transparent about its funding, but we now know it has received $2m from ExxonMobil, more than $4m from a group called the Donors Trust (which represents various corporations and billionaires), $800,000 from groups set up by the tycoons Charles and David Koch, and substantial sums from coal, tobacco and pharmaceutical companies.


And then there are those who see organized labour as their mortal enemy:

Charles and David Koch – who for years have funded extreme pro-corporate politics – might not have been enthusiasts for Trump’s candidacy, but their people were all over his campaign. Until June, Trump’s campaign manager was Corey Lewandowski, who like other members of Trump’s team came from a group called Americans for Prosperity (AFP).

This purports to be a grassroots campaign, but it was founded and funded by the Koch brothers. It set up the first Tea Party Facebook page and organised the first Tea Party events. With a budget of hundreds of millions of dollars, AFP has campaigned ferociously on issues that coincide with the Koch brothers’ commercial interests in oil, gas, minerals, timber and chemicals.

In Michigan, it helped force through the “right to work bill”, in pursuit of what AFP’s local director called “taking the unions out at the knees”. It has campaigned nationwide against action on climate change. It has poured hundreds of millions of dollars into unseating the politicians who won’t do its bidding and replacing them with those who will.

"Look at the money trail" seems to be one of the best tools these days in the critical thinker's toolbox, Owen.

That was Deep Throat's advice to Woodward and Bernstein, Lorne. It's still good counsel.

To paraphrase Monbiot, when the Fraser Institute and/or the Manning Centre are consulted on CBC we should know that those organizations receive monies from the Koch Brothers.

The Kochs don't advertise their donations, Toby. But they make sure their message gets out.

Trump may be more devious than he is given credit for. How is it that a fellow 'making a silly mistake' ( I had about enough of that from pundits writing about George W Bush ) in talking to Taiwan on the phone is astute enough to put an old friend in place as ambassador ? And what is that business about China starting a con about global warming ? That seems totally off the wall. But notice who is being blamed.
Where do I get my contribution for being a corporate shill ? Donations are not arriving.
Here's my most recent quippage at https://downwithtyranny.blogspot.com/2016/12/trumpy-clown-and-paul-ryan-arent-only.html
Blogger opit said...
I know the trendline on this blog is so positive for climate alarm as to be ready, willing and able to write off any representation that while Trump might be nuts to say China started the ball rolling, the UN connection is not noticed at all ( but administrating a global tax of trillions would tempt bureaucracy not a bit .... riiiight ), as is the clear fact that energy politics up the wazoo are the name of the game. But our socially responsible guy from Enron ( Al Gore ) is a responsible prophet. Riiiight again.
So. What is so attractive about gaming scenarios that cannot be shown to mean a damned thing led from parameters that are so fuzzy as to be nonexistent being thought to be reliably capable of forecasting future conditions when our chaotic system frustrates precision from meteorologists in about a week ?
But climate science is different ! Sure it is. It leaves out so much in the rush to simplify physical activities worldwide so as to be completely hopeless except as an exercise to ( hopefully ) graph some action of radiant energy in our environment. If that could lead to greater understanding it would be a fine upstanding contribution to science. Used as a crutch to push transition of operational fuel system regardless of other considerations it is transparently has no function except to serve as a rationale for indefensible policies taking control of farmland away from farmers and of jungles from the residents. And of powers from nations to the UN. There's a selling point for you .... not.
Have you figured out what went wrong at Copenhagen yet ? The small nations know things are being gamed by the usual raptors.
A little light humour http://www.breitbart.com/london/2016/12/02/bernie-sanders-declares-war-climate-denying-breitbart/

It's interesting, opit, to see people like Sarah Palin and Anne Coulter having buyer's remorse. It didn't take long.