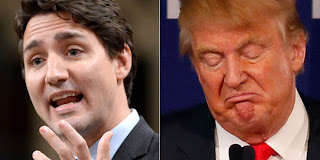 The election of Donald Trump was not what Justin Trudeau expected or hoped for. Nonetheless, Bob Rae writes, when it comes to dealing with our neighbour, The Great Orange Twitterer is the man Justin will have to talk to. The Conservatives have decided that the sincerest form of flattery is imitation:

Conservatives are rushing to mimic his style and rhetoric, in the unlikely persona of Kelly Leitch and Kevin O’Leary. Conrad Black and Brian Mulroney have gone out of their way to reassure Canadians that we have nothing to fear from Trump and that he will be a good president for Canada.


Rae advises Trudeau to steer clear of that path:

He would be wise to [avoid] the twin temptations of “don’t worry be happy” and “the sky is falling.” But that does not mean there is any room for complacency. The Keystone pipeline may get presidential approval, but not because Trump thinks he owes us a favour. Domestic priorities for the Republicans will rule the roost, which could mean greater receptivity to Canada’s oil exports but not for softwood lumber.


Still, Trump will present Trudeau with a number of conundrums:

The opening of NAFTA would put issues on the table that are decidedly harmful to Canada — the status of our dairy and poultry industries for example — and there are countless ways in which protectionist interests can be brought to bear against us.

It is not just the bilateral relationship that will be affected. We can’t pretend the premise of Trudeau’s vision and policies are the same as President Trump’s. We don’t have to pick fights or have rhetorical quarrels, but Trudeau’s political raison d’être can’t be thrown under the bus either. It will take every ounce of political skill and sophistication to articulate a different view of the world without sounding like the “anti-Trump” every day.


Justin's father had to deal with another deeply flawed president, Richard Nixon. Trump is Justin's Nixon. Let's hope the son learned a few things from his father.

Yes, we need another Pierre. All we got is more Margaret.