Not With A Bang But A Whimper 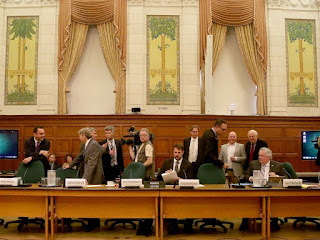 It's beginning to look like electoral reform is dead in the water. In the end, Chantal Hebert writes, our political parties could not rise above partisan self interest:

The Conservatives came into this discussion riding the referendum horse, and they come out of it more firmly in the saddle.

They have not budged an inch from their sense that the first-past-the-post system remains the best option. But they have found support from the other opposition parties for their contention that any change should clear the hurdle of a national vote.

That support is more tactical than principled.

Even as they are part of a pro-referendum consensus, the New Democrats, for instance, continue to argue that it is not necessarily essential to put a reform to a national vote prior to its implementation.
If the Liberals set out to put in place the more proportional voting system the New Democrats crave, the government could find support on their benches for dispensing with a referendum.

But it's the Liberals who have truly bungled this file:


As for the Liberals, they have managed to turn a secondary policy front into a field of ruins.

With the logistical clock ticking on moving to a different voting system in time for 2019, the government waited eight months to set up a process to follow up on the prime minister’s election promise.

It never articulated a set of principles that might guide its management of the file.

The Liberals went into the debate with a known preference for a ranked ballot but could not be bothered or could not find a critical mass of intervenors to advance that option.

The Liberal committee members ended up rejecting the time frame set by their own leader to achieve a reform as unrealistic and the notion of a more proportional system as too radical.

Electoral reform is an idea whose time has come. But it looks like it's an idea that will end, not with a bang, but a whimper.

Image: Ottawa Citizen
Posted by Owen Gray at 6:05 am

We truly have been "had'. From agreeing to pipelines, letting down veterans, back peddling on many issues, the liberals have stolen the election and only accomplished ridding us of the despised "Harper" government. Tthrowing out their promise of electoral reform and remaining with first passed the post system will keep us in those dark times of scare tactics, protest votes and strategic voting which goes largely unrecognized and unrewarded. At least reinstate the dollar for a vote for Greens and we can get some value in a "wasted" vote.

Any kind of electoral reform -- if it ever happens -- should include the reinstatement of public subsidies for political parties based on the number of votes received in the last election, Anon.

Having read the entire report it was a real disappointment for me, with 100s of pages just regurgitating some of the 'experts' opinions and many more just listing those who 'participated' and just 2 or 3 pages of 'recommendations' it seems to have been an exercise in futility. There is little doubt in my mind that political intransigence mostly from, but not limited to, the Conservative members along with the effort to find 'consensus' has reduced the commendable efforts of this committee to little more than a compendium of divergent views. Whilst not strictly in their mandate I was hoping for something a little more substantive!
The chances of any change before the next election are indeed now very slim.

Any day now I expect marijuana legalization to bite the dust. Jim Carr already told First Nations that the Liberals reject the need for consent, so there goes all the promises made to First Nations and there goes the UN Declaration too. Social licence has been declared non-operational. The Paris Agreement is in stained shreds on the bathroom floor.

These days, Rural, a politician who puts country before party is a rare breed.

There is wreckage everywhere these days, Dana -- the result of broken promises. And still our leaders can only find the sandbars in the river.

Funny how people read this column and see Liberals are to blame. As someone who followed the issue all along, I thought Hebert was just attempting to spread the blame around evenly. Perhaps she put a spin on it to make the Liberals look worse.

(She's actually an establishment minion opposed to electoral reform. She said ranked ballots were DOA because they would put the Liberal party in power forever, which is an infantile clam. This was a gambit to polarize the debate and prevent the Liberals from implementing the option. The establishment wanted a polarized two-option referendum to kill ER.)

The Liberals aren't too blame. The ER committee was consigned with the task of coming up with an alternative to FPTP that could be implemented in time for the 2019 election. The Dippers wanted a PR committee and got it. But instead of working with the Liberals on a compromise, which is the whole point behind PR, they sided with the Cons when they didn't get their way.

All-or-nothing is not a compromise. Dippers just proved that PR is a bad idea. They would attempt to hijack any government they were a part of and vote it down within 6 months. Like the Toronto Star has been saying, it would be "legislative chaos."

Given the Cons are likely to win a 40% fake majority in 2019, Canada has not heard the end of ER. But next time the Liberals will just run on ranked ballots directly and not attempt to work with fanatics and ignoramuses.

Dippers just killed PR in Canada. (Like Mulroney killed the constitutional amendment.) Hope they enjoy the fruits of their labor!

The Liberals could still legislate a ranked ballot, Anon. But I doubt they'll do that.

If the Liberals implemented ranked ballots, all opposition parties and the establishment media would go crazy claiming the party is attempting to install itself in power for all eternity.

I would suggest people who voted Liberal should write their MPs and demand they adopt ranked ballots. Or start a petition. Make washing their hands of electoral reform just as unpalatable an option as following through.

The Liberals need to hear from Canadians. (I think they've heard enough from pro-PR crusaders and anti-democracy plutocrats.)

That may happen, Anon. I suspect there's a plurality for ranked ballots. But are the Liberals prepared to live with the outcry?

Crass potlitics wins every time. The Lib brain trust believes they will slice and dice the Con field next time. Hmm did Harper not think the same of Trudeau.

Hubris frequently causes its carriers to misjudge a situation, Steve.