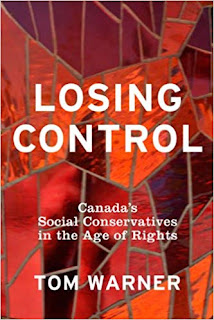 The Conservatives have a big problem: they don't know what to do about the social conservatives in their midst. Susan Delacourt writes:

Social conservatives are definitely falling out of fashion with Conservatives, who worry that they’ve become a drag on the party’s chances for winning the next election.

But, if they're pushed out of the party, there will be blow back:

It’s an age-old rule in politics: insult your opponent, if you must, but don’t insult his or her supporters. Hillary Clinton’s defeat to Donald Trump was built in part, she conceded later, by her description of his supporters as a “basket of deplorables.” In the deeply divided United States of 2016 and today, being deplorable is now a badge of honour for many.

Just this week, Trump’s Republicans cranked out a new ad to capitalize on mockery from a CNN panel that labelled the president’s base as “credulous rubes.” Populism thrives on what political elites reject.


The party embraced these people. In fact, they chose one of them as their leader:

In 2005, a newly elected MP named Andrew Scheer stood up in the House of Commons and described same-sex marriage as unnatural, like trying to rename a dog tail as a dog leg. It was jarring when the Liberals released the tape of it this year, but it wasn’t in 2005, causing not a ripple nor a news story that I can recall. Opponents of same-sex marriage weren’t exactly rare 15 years ago in the Commons. They existed in every party.


But now they don't. And the Conservatives are in trouble.

According to former Harper strategist Ken Boessenkool, so-Cons account for more than 10 percent of the party's votes. The Cons can't afford to lose those votes if they want to form a government. The problem is that so-Con policies scare off the additional voters the party needs to attract now that the NDP can't be counted on to peel votes away from the Libs.

Frankly, the Cons should just ignore their so-Con voters. Harper used to throw them a bone, like the Office of Religious Affairs, but scupper their efforts to limit abortion. After all, where else are the so-cons going to park their votes? Christian Heritage? Gimme a break!

Good point, Cap. the So Cons have nowhere else to go.

.. Boessenkool 'came from the womb as a hard right wing' jackass.. those are his own words more or less, back in the day when he signed the so called Alberta Firewall letter with Harper, Flanagan et al. He's more or less a Matt Wolf type, just like so many of that diseased crew are. I suspect he's full of shit re that vague sly lie 'more than 10%' of the rebranded Reform Waffen Party members and voters are So Con.. As a spectrum spread over many different types of confused parasites and/or simply out of date folks who's dad and grandad ALWAYS vote 'Conservative'.. I just see a huge blur.. or blob of voters. Perhaps its far far higher, but Boessenkool cannot admit that, nor could Harper. Not that they care. They are in the business of manufacturing, stimulating any votes by any means, as well as using every trick in the book to deter Liberal voters from voting.. discourage young 'millenials' from being interested, divest targeted and micro targeted potential Liberal voters. Its all very GOP bald faced horseshite salad.. and as Steve Bannon suggests, 'flood the scene with shit'. Just pump it 24/7 in astonishing volume. Evangelicals.. those diehard 'christians' believing in The Rapture, the foretellings of the holy moly bible are about 8% of Canada's population (in the USA approx twice that, perhaps even 18%) but its those same evangelicals who are also trying to take over 'Conservative' campaigns in every riding possible to ensure the 'Conservative' candidates are Pro Life and firm against giving an inch re LGTBQ rights. When Boessenkool talks re So Cons.. he's talking out his So Con ass, he is one. More 'smartest guy in the room' Mood Disorder, comorbid with Sociopathic partisan & monarchist, dominionism white old stock fervor. He's no better than the rest of the distorted Harper adulation Waffen like Arthur Hamilton, Lorne Gunter, Matt Wolf, Andrew Scheer, Jason Kenney, Pierre Poilievre, Jenni Byrne, Marilyn Gladu, Erin O'Toole or Michelle Rempel-Garner or Rhona Ambrose.. career political animals.. not Public Servants in any way, shape or form, ever.. No no, they are going to save Canada and Canadians from ourselves

.. The entire tale is complicated, muddy and convoluted Owen. Without doubt the roots of Social Conservatisam in Canada go back to Ernest Manning, But a major aspect or focus of his Alberta party at the time was 'the rights and responsibilities of the individual' .. The evolution of that 'morality' or 'value' has mutated or eroded into the Harper reality or bad dream which seemingly was 'the rights of the winner of an election'. That led to a Canadian Prime Minister accepting paper bags of cash while in power.. while Mainstream Media seemed more aware of Mulroney & Reagan in two part 'harmony' (crooning or croaking - take your pick) When Irish Eyes Are Smiling. By that point Reagan was likely well into cognitive decline and Mulroney was well into his bagman act. As the Media reported.. a charismatic young politician named Harper had usurped Preston Manning and the shuffle line dance of Party names was in full swing.

The entrenched 'Brand' word 'Conservative' and the solid base of votes across Canada was all Stephen Harper wanted, to gain power. David Orchard never saw Harper coming, as Peter MacKay had already sold him and their PC Party out to Harper's Canadian Alliance. Harper was desperate.. his Canadian Alliance Party's 'Brand' stunk.. the odour of old stock racism, anti-semitism, sexual intolerance was like a boat anchor.. and changing names of the Party was muddying the 'Brand'. He had one chance - basically a hostile takeover of the 'Conservative Brand' .. does anyone really wonder why Peter MacKay now believes its 'his turn' ?? This is like kids in the sandbox or the tree fort.. and its their turn to be in charge. But Andrew So Can Scheer squeezed in as a useful thumb in the dike while Harper stumbled off his ass.. which had certainly taken a proverbial even biblical, ass kicking

The Liberals know how the game is played too.. they aint sweet little altar boys, all in harmony with the choir.. Stuart Butts may just be another Ray Novak, with more influence, that nobody ever elected.. We may never know who is the author of the bizarro concept of 'we must increase greenhouse gas emissions in order to lower emissions'. but that's the game they play now.. and the electoral tool, dueling rule both Parties adhere to is the collection, purchase, dark use of Canadians' personal, private, purchasing, and electoral voting data.. with zero accountability, transparency or legal recourse.

We've come a long way baby... Put bluntly, Owen.. Ken Boessenkool, as a Harper insider, can request and access your 'data' or mine or your children's if any, or that of your next door neighbor, or your donations records, or those of any friend on Vancouver Island or the Maritimes, and yes, he can find out your internet IP too. How ? He has many portals via 'Conservative' Party channels available to Stephen Harper or Jason Kenney into the secretive, toxic, dangerous CPC federal electoral database

This aint Ernest Manning's Party anymore Owen.. I don't believe we've actually been introduced to the actual 'owner or owners' .. but I believe the letters 'Incorporated' may be part of the name.. or at least include a 'number' as in Privately Held Numbered Company..

I agree it isn't Earnest Manning's party anymore, sal. If it had stayed within Alberta's borders, it would be easier to deal with.

.. that horse has left the barn Owen.. aint no doubt ..
Contemplating the open stable door never rounded up no loose horsey ever.. Question now is can we rope, rodeo or corral that jughead swayback old Harper - Manning gelding that seems overdue sadly, for a last happy trail or last trailer ride

The problem the Conservtives have, sal, is that their old ghosts never die.