Speculating on the Economy 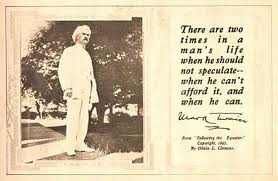 Jim Stanford has an interesting piece in today's Globe and Mail. He notes that the Harper government justified its imposed settlement on Canada Post by claiming that the economy was at risk. Apparently, a government which believes in free markets has no qualms about intervening in those markets to rescue the economy. If that's true, writes Stanford, there are more severe threats these days than Canada Post.

Consider the problem of market speculators -- beginning with the soaring price of oil. The cost of a barrel of oil is a clear and present danger to the economy:

Even at $1.25 a litre, gas prices will rip $40-billion from the pockets of Canadians this year. The soaring prices are a big reason why consumer spending has stopped in its tracks – an alarming development that could precipitate a recession. And you can’t invoke “market forces” to explain the prices. They’ve been driven up by speculation, fat oil industry profits and OPEC’s continuing power.


The cost of oil has also driven the rise in the Canadian dollar -- a clear and present danger to Canada's manufacturing base:

According to the OECD, the fair value of our dollar (based on purchasing power) is 81 cents (U.S.). Currency traders have pushed it 25 per cent higher, jeopardizing Canada’s ability to sell anything (other than oil) to world markets. Again, savings on imports aren’t passed on to consumers. But the pain to our export industries and the threat to our future growth are real.


And to cool the rising Canadian dollar, the Bank of Canada will have to raise interest rates -- which will cool the entire economy.

The Harper government argued that -- because Canada Post was vital to the economy -- its employees had to take a haircut, and they imposed wage rates lower than what the corporation had offered. Will they force speculators to take a haircut?