Has Justin Got "It?" 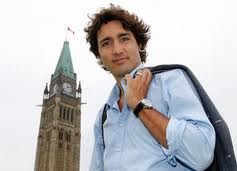 "It" can be defined a number of ways -- intelligence, the common touch, gravitas. The main knock against Justin Trudeau is that he doesn't have what "it" takes to be Liberal leader. But Lawrence Martin writes that previous leaders -- who had "it" -- didn't fare very well:

The Conservatives have hit pay dirt when they chose youth over experience:

For the Tories, there was Brian Mulroney. On becoming party leader in 1983, he was young, had zero experience as an elected politician, and only a glossy grasp of the issues. By contrast, Robert Stanfield, a previous leader, was a deeply conscientious issues type. Mr. Mulroney won two majorities. Bob Stanfield lost three elections in succession.


But that strategy has also failed. Joe Clark was an excellent Minister of Foreign Affairs. As prime minister, he  lasted as long as a summer dandelion. So where does that leave Justin? Perhaps what really matters, Martin writes, is a strong behind the scenes operation:

If he enters the race, [Justin] will need something the Grits haven’t had since Eddie Goldenberg and Jean Pelletier stood guard for Jean Chrétien: a first-rate management team.


I can remember when Pierre Trudeau was an unknown quantity. Jean Marchand was supposedly the man to watch. Say what you will about them, but Keith Davey and Jim Coutts had a lot to do with the elder Trudeau's success.
Posted by Owen Gray at 8:46 am

The Libs are on the outside looking in. The Canadian people aren't just waiting eagerly for them to come back and take over. That continuum is broken, it's over.

If, as expected, the Libs insist on pursuing celebrity over substance they risk consigning themselves to obscurity for a good long time, several parliaments at least.

They're a gaggle of all but useless buggers now, incapable of speaking to the issues of the day that impact ordinary Canadians and those to follow.

I've been reading Chris Hedges "Death of the Liberal Class," Mound, and I'm inclined to agree with you.

Hedges claims that liberals have lost their sense of vision and moral purpose. They've drunk the corporate Kool Aide.

I have no idea who the next Liberal leader will be. But, unless they make putting an end to gross inequality the centrepiece of their program, they're doomed.

A good leader in politics is a combination of charisma, good speaking/debating abilities, ability to bring people together/to get people to work together, and to convince the public that your party is the best qualified to do the job and to represent the people, and good skills at management and delegation. Last but not least, a good leader in politics must recognize the needs of the people/nation - what is important to the people, and what the priorities are.

Does Justin have what I've mentioned in the 1st paragraph? Well, he is charismatic and people know of him. Does he have the other qualities? We don't really know yet - we haven't seen these so far.

I'm afraid to read Chris Hedge's latest given this interview:

It's hard to imagine how we will ever reverse what is happening. It now seems that even the Supreme Court might be onside with Harper.

I agree. We just don't know yet. The "other qualities" matter much more than his age.

Some of those qualities come with age. We'll have to see him in action -- if, indeed, he enters the leadership race.

It's not easy to read Hedges book, Bejing. It's a litany of liberal failure.

On the other hand, liberals will be consigned to the dustbin of history unless they acknowledge their failures.

As someone who has been to a few Justin Trudeau events, I can attest first hand that he is more than capable of talking to Canadians of any and all stripes. What's more, I could tell that he actually enjoyed it. At Q & A, he never shied away from questions. Makes good eye contact and yes, he can answer the difficult questions.

As for that whole celebrity over substance thing, well, time for a brutal truth. Most Canadians are shallow. The most important thing to many is the score of their favourite Hockey team or what the Kardashians are up to. Rock star will trump a person of "substance" any day of the week. Justin definitely personifies rock star. I could tell whenever he walks in a room, he gets the rock star welcome, even if he was the supporting cast of someone else's event.

A young (in her 20s) part-time newscaster and commentator on CJAD, Laura Casella, who is pretty right winged and yes, there is a picture on her FB page, posing with Stephen Harper, all ga ga giddy like a school girl, said a few times on the air that if Justin became leader of the Liberals, she'd vote for him. She felt it was his way of engaging people that won her over. I'm sure she's not alone.

Besides, as mentioned in your post, Owen, they tried substance with Dion, Martin and Ignatieff--they failed. Why not try a young rock star. The trick for Justin will be the handlers he has working for him.

It's a crap shoot at best, I know, but look at this way, no other potential name that has been mentioned in the media has a chance of cuttig it, not even Marc Garneau. Yes, as the first Canadian in space, he's a national hero and such, but folks speak of Bob Rae having been too old. Garneau is only one year Rae's junior. Also, he's really not a great speaker and doesn't light up a crowd or work a room the way Justin can.

I would contend Justin would be the Liberals' last hope.

I can't hold Justin's youth against him, ck.

In fact, his youth may speak directly to a generation who has seen nothing of value in our present system -- but who know they are being sold down the river by the Harper government.

I agree that the people in his backroom operation will make a difference.

But, in the end, it will be Justin's ability or inability to speak to all Canadians that will tell the tale.