Putting Us In a Box 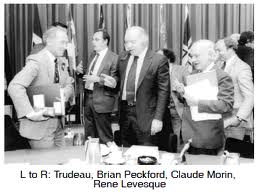 Michael Behiels writes that if Canadians expected to see any federal-provincial conferences during the Harper regime, they should give up on the idea -- for two reasons:

First, Stephen Harper will not resuscitate the longstanding practice of inter-state federalism because the process threatens to undermine the very expansive conception of his executive powers. Public federal-provincial conferences allowed prominent premiers, such as Peter Lougheed, René Lévesque, Alan Blakeney, and Bill Davis, to help fashion the national agenda. Most assuredly, PM Harper will have none of this!


Whether dealing with health care, changes to the criminal code or restructuring Old Age Security, Harper rules by decree. All of these changes mean downloading costs to the provinces. But the prime minister's response is simple: Deal with it.

The second reason he will not meet with the premiers, writes Behiels, is Harper's dedication to an ancient conception of federalism -- which John A. Macdonald fought against during his entire career. Remember, Canada's constitution resided in London. And the British House of Lords had a say in how the country was governed. They believed in what Behiels calls "classical federalism:"

These august Lords, most of them Scottish nationalists and strong advocates of a decentralist Imperial Federation conception of the British Empire, replaced the centralist Macdonaldian conception of a quasi-federal system with their concept of a watertight compartments classical federal system of equal and sovereign states within their respective jurisdictions.

Harper and his Conservative Party and government, strong supporters of provincial rights, are totally committed to restoring the theory and practice of watertight compartments classical federation . . . This form of decentralized and asymmetrical federalism dominated federal-provincial relations during the Laurier, Borden, and King eras until the late 1930s.


That view of federalism changed during the Great Depression, because no one element in the federation had the fiscal wherewithal to stimulate the economy. And, with the advent of World War II, the collective effort needed to fight the war was best served by a strong central government, acting in cooperation with the provinces. When Quebec threatened to separate, the best way to deal with the tensions that threat occasioned was to "talk them out."

Harper's believes the federation was created in his image. He's not very good at talking things out. He's not very good at sharing the spotlight. And he's certainly not good at sharing power.Therefore, Canada is ill equipped to face its next crisis. In fact, Harper survived the last crisis because he had to deal with a combined opposition that was stronger than he was.

"a combined opposition that was stronger than he was." ? You mean weaker?

They weren't a very effective opposition, Holly. But they possessed the only thing which gives Harper pause -- more votes than he had.

I don't think Harper has any philosophy. He has a rigid ideology, a delusional theology, and a cunning, secretive and brutally manipulative nature. He doesn't weigh issues philosophically because that would introduce logic and fact into his deliberations. Steve boy is decidedly faith-based. He goes by his gut instinct. That's not a character trait that lends itself to cooperative, even collaborative structures such as federal-provincial engagement.

Would not the first test have been WWI under Borden, not the Great Depression?

The problem with being faith based, Mound, is that it encourages terminal certitude -- the kind of certitude which holds that the truth is revealed to a select few.

I wonder where Steve encountered a burning bush.

True. But, remember, Borden formed a Union government -- of Conservatives and Liberals -- during World War I. And, even then, conscription split the country.

Stevie Slime has no concept of how to govern so he can not meet with premiers as if they were equals. I expect that at some level he is very afraid of the premiers.

He rules by his personal decrees, is blind to science, listens to no one. Next crisis, Canada won't make it because Stevie & his slimers don't have the experience or intelligence.

He and Bush are -- unfortunately -- superb examples of the Peter Principle.

If he keeps us there long enough, we'll have no option but to accept our fate.