Something's In The Air 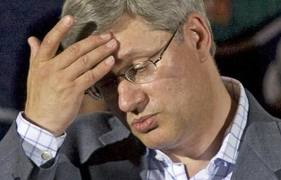 In his review of Stephen Harper's first year of majority rule, John Ibbitson wrote that the prime minister had  been "unbound." And the passage of the government's omnibus budget bill seemed to prove Ibbitson's point. But, as the contents of the bill were made public, something else happened. The public showed signs of discontent.

Frank Graves reported that the Conservatives' poll numbers were dropping in key areas of the country. Up to the passage of the budget, Canadians were bullish on the country's future. But now they are evenly split:

The latest numbers show opinion split down the middle: 45 per cent say that the country is headed in the right direction compared to 46 per cent who say otherwise. A majority of respondents in Quebec, Atlantic Canada and British Columbia say the country is not on the right track.


No doubt, Stephen Maher and Glen McGregor's reports of election dirty tricks have had something to do with the Conservative decline. It's interesting that Postmedia -- until now a reliable echo chamber for the Conservatives -- has not been kind to the prime minister. Even more interesting was a column a week ago by Michael denTandt -- another Postmedia stalwart. Dent Tandt concluded the column with the following observation:

In 2011, this same prime minister based an election campaign - successfully - on the notion that a coalition of "losing parties" holding a majority of seats in the House of Commons would lack the legitimacy to govern. This was, simply, a lie. In 2012 this prime minister, having once argued forcefully against the legitimacy of omnibus bills, forced one through himself, in the process changing more than 70 laws. This summer, Canadians are expected to forget all this, and more, because we live in uncertain economic times. Europe, you know. We go along, to get along.

Stephen Harper is not Maurice Duplessis. But the call to overlook abuses of democracy, for the sake of economic expediency - which is a never-ending murmur, beneath every move the Conservative government now makes - is insidious. It's not tyranny, nor should it be called that. But some days, you can see tyranny from here.


When Postmedia begins to comment on the stench emanating from Fortress Harper, you know something is in the air. And it's an ill wind.
Posted by Owen Gray at 9:00 am

Out here in BC the NDP is going to take the next Provincial Election in a Landslide win...

Away from the Tom Flanagan/Stephen Harper Liberals, oh I meant LIE-berals...

Everything you ever wanted to know about the BC lying liberals can be found at link above...

What's in a name, Mogs? From here in the east -- and from Gordon Campbell's connection to the Harper government -- I get the impression that B.C. Liberals are really Harper Conservatives.

If that's true, then perhaps their defeat is a sign of things to come.

I smell a revolt within the con party...

"Conservative MP Pierre Poilievre states: “In all cases, science and facts should rule our decisions.” When did Stephen Harper make this stunning 180-degree complete reversal?"

From none other than the Toronto Star...

Coming from Polievre that statement is particularly puzzling, Mogs. Perhaps it's just out right hypocrisy.

The Harperites have long had a tendency to say one thing and do another.

Polievre knew he was being a prick when he said that.

Where are the brains of the clueless dolts? The 45% who think Canada is going in the right direction.

If there's any hope, thwap, that 45% will continue to shrink.

It is very true. Gordon Campbell and his BC Ministers, forgot to tell the BC citizens, they work for Harper and still do. Campbell has the dirtiest, most corrupt and foul political record, in the history of Canada. However, Harper rewarded Campbell for doing his dirty work for him with, the appointment to England as High Commissioner.

All the while, Christy hasn't made up her mind about Enbridge?? What a crock, with Boessenkool working for her, and Christy working for Harper.

If Mogs is right, Anon, the citizens of B.C. will soon hand control of Harper's Western Territory over to someone else.

The polls out here have the NDP leading by a huge, did I say huge no I meant Galactic sized majority...

The liberals or the conservatives combined could not get enough seats to form an aggressive opposition...

I know who I'm voting for'''NDP

It's sounds like the folks in B.C. have had enough, Mogs. Perhaps that same sentiment will move east.