To Jerusalem -- Via New York and Toronto 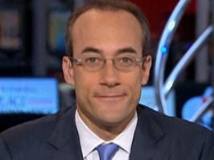 The Globe and Mail reports that Mitt Romney's foreign policy has Canadian roots. Dan Senor, who has accompanied  Romney on his tour of Israel, was born in New York but grew up in Toronto -- where his mother still lives. Mr Senor went to high school in the Forest Hill section of Toronto and graduated from the University of Western Ontario.

Returning to the United States, he made friends in high places:

After graduating from Western, he studied at Hebrew University in Jerusalem and worked for a Republican senator from Michigan. For good measure, he also attended Harvard Business School.

Along the way, Mr. Senor displayed a talent for attracting mentors in high places. They included David Rubenstein, head of the private-equity giant Carlyle Group, where Mr. Senor worked, and William Kristol, the dean of neo-conservative commentators, who took an early interest in his career.

Romney departed from official U.S. policy and described Jerusalem as the “capital of Israel,” a label that Palestinians say undermines their claims to the city. During the fundraising breakfast, Mr. Romney also compared the economic success of Israelis to that of Palestinians, attributing some of the difference to “culture.” Such a comment is “racist” and “shows a lack of knowledge,” said Saeb Erekat, the chief Palestinian negotiator.


Senor's job is to turn media lead into gold. He has a track record. In 2003, Senor became the chief spokesman for Paul Bremer. His job was to make a disaster look like a triumph. But, occasionally, he let his guard fall:

In the book Imperial Life in the Emerald City, Rajiv Chandrasekaran memorably quoted Mr. Senor as saying: “Off the record, Paris is burning. On the record, security and stability are returning to Iraq.”


My only comment is that this Canadian is deeply embarrassed.

I find Romney's glib cultural analysis that says Israeli succeed because of their culture while Palestinians did not ( and will never, I suppose) Even a modestly educated person who cared to make himself familiar with the Israeli Palestinian conflict could never make such an outrageous claim. It could be viewed as racists twice over. Those Jews really know how to make money; and Muslim culture is inherently inferior. The man is ignorant and lives in a World of his own inhabited by the super rich who see themselves as blessed by God with money and privilege.

I wonder if he will return to the US and repeat this cultural argument in that country's minority communities (black, hispanic, muslim, asian, native american) They are poor and disadvantaged because of their inferior culture. This blaming the victims is unworthy of anyone who aspires to be President of all the people and leader of the free world.

These days, Philip, when Romney opens his mouth, he lends credence to the notion that you can possess two Harvard degrees and still be the village idiot.

In today's atmosphere one cannot even discuss the issue of Israel in public because so many people are so imbued with pro-Israel propaganda. And men like Romney (to say nothing of Harper) are so entrenched in their religious bigotry that they can't see the words for the trees. The State of Israel is simply the most unlawful, expansionist state in the world. It has treated the Palestinians as nothing short of animals and it continues to steal the lands of others on a daily basis. It owes its existence almost entirely to financial and military aid from the US and men like Romney are dispensationalists who don't care a fig for justice or equality so long as the expansionist militarism of Israel (a proxy force of the US) is supported.

And men like Romney and Harper conflate the state of Israel with Benjamin Netanyahu's government, Kirby.

Looking at Romney, i am remined of the old Monty Python skit, "The Upper-Class Twit of the Year.

You and the Brits, Lorne. know a twit when you see one.