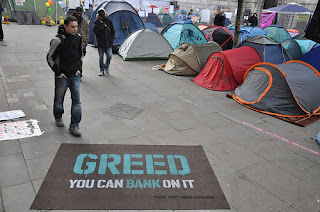 The changes are a direct and significant challenge to Canada’s existing national ombudsman – the Ombudsman for Banking Services and Investments (OBSI), headed by Douglas Melville. The minister’s eight-paragraph press release doesn’t even acknowledge the existence of OBSI, which has handled thousands of complaints and secured millions of dollars in compensation in the past decade.

OBSI was created in 2002 by the country’s banks, under a threat from Ottawa to impose a federal arbitrator. But the banks have never fully embraced their offspring. It’s seen as overly costly ($8-million budget in 2012, intrusive and often embarrassing. Among other things, Mr. Melville tracks which banks face the most complaints (a dubious honour that went to Toronto-Dominion Bank in 2011).


Flaherty dropped the news on a Friday afternoon, a time traditionally chosen for burying a story. Flaherty knows that Barclay's Bank is in turmoil for its attempt to fix the LIBOR rate. If you want to help the banks these days, it's best the public doesn't know about it.

It's pretty clear that ordinary citizens -- once again -- are getting the short end of the stick:


An already weak system is being watered down even more. Anita Anand, an associate law professor at the University of Toronto, said the proposed changes are unlikely to be consumer-friendly.

“A single system that applies to all firms would be preferable because it provides certainty for consumers,” Ms. Anand said.

The shift to multiple dispute resolution providers is also conceptually at odds with Mr. Flaherty’s push for a single, strong national securities regulator, she suggested.

In a submission to the Finance Department, investor advocate and blogger Ken Kivenko said the private-sector system will add “opaqueness and secrecy,” weaken consumer protection and undermine OBSI’s ability to fund itself over the long-term.

This all may suit the banks.


The Harper government has never seen itself as a referee, whose purpose is to reach a just settlement in a dispute. In foreign affairs, in labour relations and now in banking, it has defined its mission as taking a side -- and helping its chosen side win.

It's interesting that the winners are never the citizens who elected -- however dubiously -- this government.
Posted by Owen Gray at 8:46 am

Email ThisBlogThis!Share to TwitterShare to FacebookShare to Pinterest
Labels: Flaherty's Gift To The Banks

Another bit of news to which they do not want people to pay close attention, quietly made public on a late Friday afternoon.

They really work hard, Phillip, to make sure we don't know what they're doing.

Any announcements which are accompanied by fanfare are self-congratulatory.

You know Harper is pulling the strings to help the rich get richer and wipe out the so called middle class... and it must be scathing for him... that Thomas Mulcair was voted best dressed at the 100 year anniversary of Harper's adopted home town, cow-town, Calgary for you folks out east...World's Largest Outdoor Rodeo...Ladies and Gentlemen the Calgary Stampede...

As we all know Harper is a dead beat...READY FOR DEFEAT:)

OH AND i FORGOT to mention...

How foolish stephen sometimes dresses for this event:

I don't know much about fashion. But Drew Hayden Taylor was not impressed.

More importantly, Calgary has a mayor who seems to stand for things Stephen doesn't -- like multiculturalism.

And Alison Redford seems to be a genuinely Progressive Conservative.

the story buried pretty well because this is the first I caught wind of it. Thanks for posting that.

yes, we may even see the NDP take more seats in the next federal election in Alberta.

People know Stevie Slime & the slimers aren't doing anything to help the working people of this country.

Stevie Slime is there to help China, the oil companies, war machines, banks, multinational corporations, friends, etc. The voters not so much. Then again you get what you voted for. The people of this country voted him a majority & he is doing as he promised. We won't recognize Canada when he is through with it or we are through with him.

It's all about keeping us in the dark, Kirby.

If we really knew what their program was -- for example, changing OAS -- they would never have a majority.

If there ever was an example of how the principle of "caveat emptor" applies in politics, e.a.f., it's Stephen Harper.

It's not that we weren't warned. Joe Clark told us long ago what Harper wanted to do.

We made the mistake of thinking that giving the man a majority would mellow him.

"We made the mistake of thinking that giving the man a majority would mellow him."

I wouldn't say "we". It was the editorial boards of Canadian media and their pundits who made that claim while endorsing the CPC in the last election.

True, Bejiing, the majority of "us" didn't vote for him.

I've just finished Chris Hedges Death of the Liberal Class, in which Hedges documents how firmly the corporate power elite controls the levers of power.

The sad thing is the majority of us don't understand just how much control the corporate elite has.

But the proof of that power is Stephen Harper's agenda.

Q: Why does Stephen Harper only make backroom deals in the dark?

A: Vampires always wilt in the LIGHT of day...

And sunlight is the best disinfectant, Mogs.