Too Smart To Stick Around 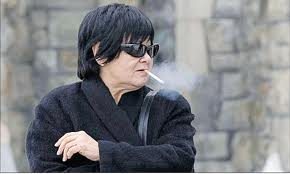 Pundits of all political stripes were expecting Stephen Harper to shuffle his cabinet this summer. Bev Oda left the cabinet yesterday and Julian Fantino replaced her. The shuffle was a fizzle. Why did Harper not deal the country another hand of cards?

The truth is, no matter how he shuffles the deck, Harper knows he has a lousy hand. He's known that from the beginning. That's why he has ridden herd on his caucus from the very beginning. They are not this country's best and brightest.

And despite his electoral success last May, they still keep getting themselves in trouble. Vic Toews can't open his mouth without putting his foot in it. And Peter MacKay -- who is the reason Stephen Harper is prime minister -- can't add or subtract. Lawrence Martin asks:

What kind of message is being sent to the public when so many in the Conservative government are not held to account for their actions? What is it about Mr. Harper that makes it so difficult for him to show a degree of contrition or humility that would sit so well with the public? How much hubris is in that tank?


The answer -- and it should be clear to everyone by now -- is that there is a lot more hubris in the tank. In the Harper government, the caucus and the cabinet are straw men and women. Their job is to do as they are told. Those who refuse -- the Jim Prentices, the Belinda Stronachs, the Bill Caseys, the Garth Turners -- leave of their own accord.

They're too smart to stick around.

Hey, it couldn't happen to a nicer bunch.

Looking ahead to 2015 or whenever Harper calls a snap election, I think the best outcome is Anyone But Conservative.

With any luck, enough of Harper's hard-core 20% support will erode away or one or more of the other parties can mobilize enough support to swing 20 ridings.

Then, in minority, the fun begins. Keep the faith on eliminating the scourge.

I'm not the same Anonymous as the last one.

That's what's nice about the name Anonymous. The family tree has branches everywhere.

Swinging twenty ridings to the other parties would make a huge difference.

The juggernaut would come to an end.

we have been in a top down dictatorship for some time:

2009? when will the great canadian snooze fest end?

And remember, Mogs, that it was Garth Turner who stood up in the House and told Canadians about the Conservative database which was at the heart of for all those robocalls.

Turner discovered early who he was dealing with -- and he walked away. The people who are left are those who have no backbone.

Or perhaps they understood that they were expected to show no spine.

These people refused to do that.

I don't know what you mean by your last sentence, Mogs. But, if it means they were both taken in by a smooth salesman, that's quite true.