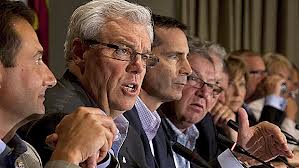 While it may be true that Alison Redford and Christie Clark are having a strong and public disagreement, at least they can sit around the same table and talk. And talk they did last week -- with all the other members of the Council of the Federation. Apparently, Stephen Harper believes that joining them is beneath his dignity.

Last week, the premiers put Harper on notice: His refusal to deal with them as a group was no longer acceptable. Michael Harris writes that Jean Charest put the issue succinctly:

Unilateralism was effectively bringing about the de-confederation of the country. The media had fallen for the seductive spin of Ottawa on a number of foundational issues, none more important than health care. In plain language, Charest said, Ottawa is abandoning medicare in Canada and is trying to cover that fact with “spin”, which the media is falling for like teeny-boppers seeking locks of Justin Bieber’s hair.


And Robert Ghiz said that the Prime Minister's one size fits all solutions were simply unwise:

Prince Edward Island, the premier said with both dignity and dash, had three main industries, all of them seasonal: agriculture, the fishery, and tourism. To reform EI, without consulting the provinces, and reducing all of the very different places in Canada to the same formula, simply lacked “common sense”. Not everybody could, or should, move to Alberta.


Even Saskatchewan's Brad Wall was on Ghiz' side:

“On the big, federal fiscal tools, and the way they have been used, I agree with my good friend Robert,” said Wall. “There hasn’t been the necessary consultation and it is not the case that one size fits all in Canada. In fact, there are 58 distinct regions across the country so the need for consultation is very great.”


And, in the interest of consultation, the premiers invited Harper to their next conference on the economy. The subject should interest Harper. He claims -- however dubiously -- to be an economist. But he's not in the habit of meeting those he considers lesser mortals.
Posted by Owen Gray at 10:17 am

I'm glad Jean Chretien spoke up. I would love to hear Joe Clark's views on Harper's presidency federal leadership. More Canadians need to wake up to the fact that they are being ruled by the Reform Party.

It's not in Harper's pervy nature to consult. He doesn't consult his own caucus and even cabinet ministers operate by their master's fiat.

Besides, consultation threatens the prime directive - secrecy in all things, at all times.

Precisely, Bejiing. The claim that these guys are the Conservative Party is simply false advertising.

Joe Clark long ago knew what the gamut was all about. And Jean Chretien, who also knew what "Progressive Conservative" meant, was never fooled by the Harper line.

The Conservative Party is not a confederation. In Harper's view, there's no reason for Canada to be one, either.

I have read that one of the reasons Harper no longer 'does' these conferences is that the Prime Minister tends to be the subject of attack. I hope he has learned that absenting himself from a function so vital to the federal nature of Canada does not leave him immune to criticism.

I've read the same thing, Lorne. Frankly, I think the reason Harper doesn't show up is because he knows how to dish it out, but he doesn't know how to take it.