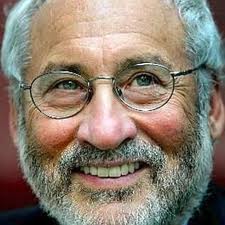 In Canada, there has not been much comment on an op-ed piece which Joseph Stiglitz published in The Washington Post two weeks ago. Stiglitz examines American economic policy over the last decade. Because Stephen Harper has followed the same policy, Canadians should ponder Stiglitz' analysis. The data, he writes, are not good:

The seriousness of America’s growing problem of inequality was highlighted by Federal Reserve data released this month showing the recession’s devastating effect on the wealth and income of those at the bottom and in the middle. The decline in median wealth, down almost 40 percent in just three years, wiped out two decades of wealth accumulation for most Americans. If the average American had actually shared in the country’s seeming prosperity the past two decades, his wealth, instead of stagnating, would have increased by some three-fourths.


Stiglitz argues that all of this was not mere happenstance. American economic policy is driving inequality -- and the results have been disastrous:

The Great Recession has made this inequality worse, which is likely to prolong the downturn. Those at the top spend a smaller fraction of their income than do those in the bottom and middle — who have to spend everything today just to get by. Redistribution from the bottom to the top of the kind that has been going on in the United States lowers total demand. And the weakness in the U.S. economy arises out of deficient aggregate demand. The tax cuts passed under President George W. Bush in 2001 and 2003, aimed especially at the rich, were a particularly ineffective way of filling the gap; they put the burden of attaining full employment on the Fed, which filled the gap by creating a bubble, through lax regulations and loose monetary policy. And the bubble induced the bottom 80 percent of Americans to consume beyond their means. The policy worked, but it was a temporary and unsustainable palliative.


And how do Republicans intend to remedy this problem? What the country needs, Mitt Romney says, is more austerity:

The austerity advocated by some Republicans will lead to higher unemployment, which will lead to lower wages as workers compete for jobs. Less growth will mean lower state and local tax revenue, leading to cutbacks in services important to most Americans (including the jobs of teachers, police officers and firefighters). It will force further increases in tuition — data published this month show that the average tuition for a four-year public university climbed 15 percent between 2008 and 2010, while most Americans’ incomes and wealth were falling. This will lead to more student debt, more profits for bankers — but more pain at the bottom and middle. Some, seeing the consequences of their parents’ debts, won’t be willing to take on the levels of debt necessary to get a college education, condemning them to a life of lower wages. Even in the middle, incomes have been doing miserably; for male workers, inflation-adjusted median incomes are lower today than they were in 1968.


Note that the Republican prescription for this problem is the same one contained in the recent Conservative budget. The difference, the Harperites argue, is that we pass austerity, The Americans -- mired in gridlock -- can't. All the conservatives have done is to find a shorter path over the cliff.

Email ThisBlogThis!Share to TwitterShare to FacebookShare to Pinterest
Labels: Joe Stiglitz On Austerity

I was shocked recently when I read an article on Vancouver housing prices. What got me was the statement that real incomes in Vancouver had declined since the 1970s. We hear about that in the States but it's a virtual secret in Canada.

If you haven't already, you must read "The Spirit Level" by Wilkinson and Pickett, two prominent Brit epidemiologists. They apply their medical science to explore inequality across the nations of the OECD and across the states of America.

In both cases their findings are identical. Nations and states with the greatest inequality have substantially worse outcomes on everything from homicide and incarceration to teen pregnancy, obesity, divorce and longevity.

What was most telling was their observation that enhancing equality benefits nearly everyone in a society, including the rich. It's only the richest of the rich who are less well off.

Robert Reich has also identified the battered middle class as the true engine of the American economy. The 1% are ultimately cutting their own throats by driving the wealth gap.

Thanks for the reading tip, Mound. I read Reich regularly. The evidence that this economic model isn't working is everywhere.

Unfortunately, Stiglitz, Reich and Krugman are voices in the wilderness these days.

All that Stephen Harper has to offer is the claim that Jack Mintz has the answer to all economic problems.

I do appreciate your blog from the other side of this great country Canada!

I have been following Joe Stiglitz for some time.

Its hard for me to imagine an economist [Joe S.] who worked for IMF/WB exposed their inner workings.

Their are still heroes, Mr Joesph Stieglitz is one among many.

The inner workings of IMF/WB create economic chaos in 3rd world countries so Trans-National Corporations can come in and hoover the left over bits for pennies on the dollar after the peasants revolt.

That is the world wide scam.

Steve is in on this and Joe Stieglitz must be his worst enemy, Stephen and economist [?] who never had a job, Joe Stieglitz did and exposed the one world cartel hidden behind The World Bank, International Monetary Fund and The World Trade Organization, now NAFTA CETA TPP al the alphabet letters of so called "free trade agreements" favor corporate rule over citizen law through democracy, they literally hijacked governments around the world.

Mr. Stieglitz my hat is off to you!

The World Bank and the IMF are not without their flaws, Mogs.

But it's worth remembering that, while both Stephen Harper and Joe Stiglitz claim to be economists, Harper possesses a masters degree from the University of Calgary. Stiglitz was awarded a Nobel Prize.

If Harper's & Mitt's & Bush's, etc. policies worked so well then Hondurous & other central american countries would be doing gang busters. But no, they aren't. Unless you have a vibrant middle & working class with decent public services a country will slide down the drain. The U.S.A. & Canada are there already.

Because people have been living on their credit cards so long they don't realize what is happening. It is most likely also why interest rates are not going up. If they did most of the working/middle class would be filing bankruptcy.

B.C. has the highest consumer debt in Canada. no wonder.

i enjoyed reading Mr. Stiglitz's column, thank you. I will be forwarding it to my friends.

It's interesting that what Stiglitz is saying about the importance of the middle class is nothing new, e.a.f.

The prosperity of the post World War II years was built on the importance of the middle class.

However, despite their rhetoric about being in touch with "ordinary Canadians," these folks actually spend little time with "regular people."

They focus on power brokers. The truth is they don't see the middle class. And they try hard to keep them at bay.

But Stiglitz had a job and harper never ever had, in fact in the real world...

correct me if I am wrong, oh wait a minute for my hands to catch up to my keyboard, he was actually a mail boy for Imperial oil in Edmonton, his only real world job experience ...

Stephen harper is a joke compared to Joe...

"The World Bank and the IMF are not without their flaws"

Exactly they are the new masters of the universe which is why Mr. Stiglitz revolted and quit

Stephen is still the mail boy

Exactly, Mogs. Stiglitz quit when the Bush administration sought to steer the agency in a more "friendly" direction.