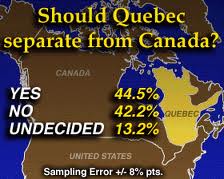 Stephen Harper -- that shrewd political strategist --  has maneuvered himself into the hands of the Parti Quebecois. He has vowed to stay out of the upcoming provincial election. But he will, nonetheless, be at the centre of the debate. Daniel Leblanc gives Globe and Mail readers a preview of that debate:

The issue of Canada-Quebec relations is guaranteed to play a part in the provincial election. The governing Liberals are set to campaign on a promise of constitutional stability, arguing that PQ Leader Pauline Marois’s priority is calling a third referendum on sovereignty and causing political chaos in the province. The upstart Coalition Avenir Québec, meanwhile, is trying to attract sovereigntist and federalist voters with its promise of a 10-year moratorium on constitutional battles, in order to focus on economic and social matters.

The PQ is refusing to box itself in on its timetable for a referendum on sovereignty, but vows to quickly make life miserable for the federal government after nine years of relative calm with the Charest government.


The truth is that, when Harper chooses to withdraw, he makes himself a target. And the PQ has a lot of ammunition. Leblanc writes:

As part of its strategy, the PQ argues that the Liberal government of Jean Charest has failed since 2003 to force the Harper government to adopt policies on crime, the environment and gun control to meet Quebec’s demands.

The PQ accuses the Liberals of failing to launch effective offensives on issues such as Ottawa’s decision to pull out of the Kyoto Accord or the dismantling of the long-gun registry, which have faced wide opposition in Quebec.


Harper thought that, by officially declaring Quebec a nation within a nation, he had solved a long standing problem. As usual, Mr. Harper's rhetoric is stronger -- but not smarter -- than his policies. He's gone from the frying pan into the fire.

Email ThisBlogThis!Share to TwitterShare to FacebookShare to Pinterest
Labels: Stephen Harper and Quebec

So much of Harper's "genius" is really overstated, and/or promoted by his supporters or the Conservative-friendly media.

He wins because he has no qualms playing dirty/cheating. Examples: bringing in a cheat-sheet to the leaders' debate when the rules forbid it, shutting down Parliament to escape an impending vote of no confidence and then misinforming voters about the illegitimacy of an opposition coalition (remember also the lie about losers not getting to form coalitions?), shutting down Parliament to escape coughing up Afghan detainee information, overspending Election law limits and then attacking EC for charging them with the deed, etc.

With Harper, you have to constantly call out the transgressions or else he gets away with it and then he "wins" again.

What surprises me is the number of Conservative supporters who appear to have no qualms with winning at all cost. One would have expected that of all people, Conservatives would be the ones who would respect the rules the most.

Perhaps they don't respect the rules, Anon, because Harper and his supporters are not really conservatives.

Despite the name change, as Bejiing York says, it's the Reform Party at the helm.

QUEBEC SHOULD SEPARATE FROM CANADA AND TAKE ALL OF THE USELESS LIBERALS WITH THEM. THEY ARE NOT WANTED!!!

Regardless of your opinion of the Liberals, Quebec separation would open up a huge can of worms. If you think things are tough now, they could get a lot tougher.

Comrade Harper and his Ministers, have no morals or ethics, what-so-ever.

I think the rest of Canada, should separate from Ottawa. Well, Alberta is a huge fan of Harper's. BC would be much better off, to separate from, both Alberta and Harper.

Christy Clark and her BC Liberals are out the door. They work for Harper, as Premier Campbell did before her. Perhaps then, we can put Humpty Dumpty BC, back together again. What ever is left of BC, that is.

I think the vast majority of Quebec hate Harper more than they hate federalism. Sovereignty will take on a different hue, one that might well draw progressive federalists into the fold.

I really hope Charest is done this coming election. Ditto for Clark in B.C. All we have left to fight the Harper Regime is provinces asserting strong opposition and independence from his agenda. Personally I would like to see widespread electoral fraud proven in court and Harper thrown out of office before we end up with the Balkanization of Canada.

There are only two real sources of opposition to Harper, Bejiing -- the courts and the provinces. You can bet that Harper is looking to stack the bench in his favour.

We have to hope that they'll disallow the electoral fraud which occurred in the last election.

In the longer term, let's hope that the provinces rebel against the man who refuses to talk to him.

The real danger we're facing, Anon, is that Harper will seriously fragment the country.

I get the impression that fragmenting the country wouldn't bother him.