In The Wake Of MOUS 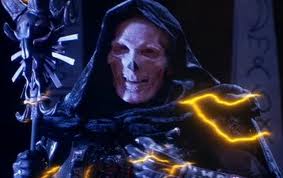 Michael Harris writes this morning that Stephen Harper suffers from MOUS -- Master of the Universe Syndrome. Harris lists the symptoms of the disease:

Here are the main symptoms of MOUS. You stop caring about what others think about you. They are merely the Plankton People – Vladimir Putin’s ringing coinage for the human flotsam and jetsam who throng to those soon-to-be terminated protests against his dark dominion in Russia. The kind of people, I might add, who now find themselves under arrest when a Harper cabinet minister is heckled. (The heckler should have been given Conrad Black’s Order of Canada: he may have stopped Jason Kenney from congratulating himself again.) What next, Rick Mercer in handcuffs for cracking jokes at the government’s expense?

With MOUS, you stop worrying about being surrounded by dubious colleagues and cabinet ministers. The people closest to the PM may be a gaggle of fatted capons, but I don’t say they’re stupid. It’s just that their political actions suggest a strange – how shall I put it - slowing or even a reversal of evolution. One wonders when will Gary Goodyear be a newt again, Vic Toews a bonobo? Judging from the way they have spoken for their departments and answered the government’s critics and the Canadian people, surely it can’t be long.

In advanced MOUS, you stop caring if you are caught out in lies, boneheaded decisions, or tawdry reprisals against innocent people. How else could a prime minister who gave us the F-35 debacle, spent $900 million more on summits than anyone else on earth ever has, and blew $43,000 of public money going to a baseball game, lecture Europeans on fiscal management?


It really is a debilitating disease. But those who suffer from it are blissfully unaware that it has infected them. Unfortunately, their communities -- or, in Harper's case, their countries -- are only too mindful that the disease is fatal -- for everyone. Most tragically, it leads to witch-hunts:

There is a witch-hunt going on in Canada these days to eradicate independent information-bearers. Gone, the Science Advisor to the PM; gone, the Polar Environment Atmospheric Research Lab; gone, the Experimental Lakes Area; gone, the National Roundtable on Environment and the Economy; gone, protection for endangered species; gone, much of the evidence gathering capacity of Fisheries and Oceans, the National Research Council, Statistics Canada, and the Natural Sciences and Engineering Research Council of Canada. There was less blood on the floor at the St. Valentine’s Day massacre.


In the wake of MOUS, all must bow before the power of the Master. In his world, everyone else is a mouse.

Email ThisBlogThis!Share to TwitterShare to FacebookShare to Pinterest
Labels: Stephen Harper And MOUS

Let us hope this lead to self destruction. The Harper government continues to hurt and disappoint more and more people. May they all turn on him and his cabinet henchmen.

If this were a Greek tragedy, Philip, the gods would be preparing to punish Mr.Harper for his hubris.

We'll have to see what the gods have in store.

How true, how true, but sad indeed...

This is the summer of discontent in my Canada...

I Emailed my Con MP David Wilks and of course the man himself is a coward...No answer...

Remember him? In Revelstoke BC he went public saying he opposed bill C-38, next day he oohed and fawned it saying it was the best bill ever, yet we KNOW HE NEVER EVEN READ IT...

Wilks' name will be remembered, Mogs. He may even be re-elected.

But he will live on in the Canadian memory as the man who -- when faced with the power of the Harper Party -- backed down.

I will campaign against his re-election with the facts...

The facts don't favour Wilks, Mogs. Let's hope the good citizens of your riding care more about facts than hype.