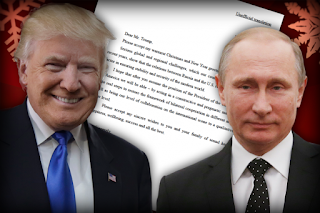 At first glance, an alliance between Donald Trump and Vladimir Putin might seem strange. But it's not, really. Andrew Nikiforuk writes that what unites the two men is a petro-bond:

The basic facts are self-evident: the world still runs on fossil fuels (86 per cent of our energy consumption) and Russia now tops the list of petroleum’s three main global players with production of 10 million barrels a day. Next comes Saudi Arabia, followed by the United States at nine million barrels — a short-term feat largely engineered by the brute force of hydraulic fracturing. (The U.S. still must import 52 per cent of what it consumes — largely from Canada, Mexico and Saudi Arabia.)


Trump and Putin are acting out of  mutual self interest. And their self interests are entwined with oil -- because oil makes the world go round:

Energy, not capital, drives the global economy and that economy is now shrinking because shale oil, bitumen and Arctic oil provide lower returns, more volatility and more dangerous debt loads than conventional oil. Their exploitation is not a solution, but a trap that will lead to the collapse of institutions — and societies — built on the assumption that cheap energy would last forever.

Putin’s government, for example, gets half its revenue from oil and gas sales to Europe, Asia and the Middle East. Oil accounts for almost 60 per cent of Russia’s exports and a third of its capital investments. The global 2014 oil price crash severely undermined the country’s economy and lowered living standards for ordinary Russians. As a consequence Putin’s oil locomotive is now stagnating and needs foreign investment and higher oil prices.

The U.S., of course, is the world’s original petro state. Although oil doesn’t dominate the economy the same way it does in Russia, its revenues have contaminated the country’s politics. ExxonMobil, one of the world’s largest corporations, funded climate change-denying lawmakers and lobbyists for decades and remains one of the largest donors to the Republican Party. Blue states tend to consume energy and vote Democrat, while red states extract oil or gas. Most supported Trump.

In recent years two right-wing U.S. oligarchs, the Koch brothers, have changed America’s political landscape. Using billions made by processing Canada’s cheap raw bitumen into value-added fuels at their refineries, the Koch brothers conducted a concerted campaign to undermine U.S. democracy by weaponizing philanthropy. In the process they disguised corporate self-interest as a populist revolt against government political elites.


And so the Chairman of Exxon Mobil -- who has deep ties to Putin -- is now Secretary of State. And Rick Perry -- the former governor of Texas and climate change denier -- is the Secretary of Energy. It all makes sense in a perverse way. The oil barons are still in charge. Trump and Putin are merely genuflecting before them, Now they will genuflect in tandem.

Email ThisBlogThis!Share to TwitterShare to FacebookShare to Pinterest
Labels: Putin And Oil, Trump

Isn't it great, Owen, that the U.S. and Russia have so much in common? Could lead to an entirely new era of detente (he observed sarcastically), don't you think?

It looks to me, Lorne, that they've agreed to let the planet burn. The flip side of "Great minds think alike" is "Fools never differ."

Wait for it. Rick Perry to restart live nuke testing, just because he is from Texas.

That's all we need, Steve.