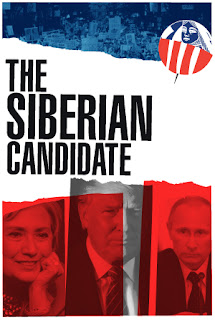 The American election was tainted from the beginning. It was tainted by Donald Trump's lies, bigotry and misogyny. But, Paul Krugman writes, now that Trump has been revealed as the Siberian Candidate -- combined with the intervention of the FBI -- the extent of electoral corruption comes into clear focus:

Did the combination of Russian and F.B.I. intervention swing the election? Yes. Mrs. Clinton lost three states – Michigan, Wisconsin, and Pennsylvania – by less than a percentage point, and Florida by only slightly more. If she had won any three of those states, she would be president-elect. Is there any reasonable doubt that Putin/Comey made the difference?


And it wouldn’t have been seen as a marginal victory, either. Even as it was, Mrs. Clinton received almost three million more votes than her opponent, giving her a popular margin close to that of George W. Bush in 2004.

So this was a tainted election. It was not, as far as we can tell, stolen in the sense that votes were counted wrong, and the result won’t be overturned. But the result was nonetheless illegitimate in important ways; the victor was rejected by the public, and won the Electoral College only thanks to foreign intervention and grotesquely inappropriate, partisan behavior on the part of domestic law enforcement.

As the story continues to unfold, it  also becomes clear that Noam Chomsky is right when he claims that the Republican party is the most dangerous organization in the world. So, Krugman asks, what do we do about it?

Politics being what it is, moral backbones on Capitol Hill will be stiffened if there are clear signs that the public is outraged by what is happening. And there will be a chance to make that outrage felt directly in two years — not just in congressional elections, but in votes that will determine control of many state governments.

Now, outrage over the tainted election past can’t be the whole of opposition politics. It will also be crucial to maintain the heat over actual policies. Everything we’ve seen so far says that Mr. Trump is going to utterly betray the interests of the white working-class voters who were his most enthusiastic supporters, stripping them of health care and retirement security, and this betrayal should be highlighted.

But we ought to be able to look both forward and back, to criticize both the way Mr. Trump gained power and the way he uses it. Personally, I’m still figuring out how to keep my anger simmering — letting it boil over won’t do any good, but it shouldn’t be allowed to cool. This election was an outrage, and we should never forget it.

Email ThisBlogThis!Share to TwitterShare to FacebookShare to Pinterest
Labels: The Siberian Candidate

The fact is Wikileaks sunk Clinton. In my world wikileaks was truth to power. I doubt the source was Soviet.

Wikileaks doesn't create its own information Steve. It gets it from somewhere else. The CIA seems quite certain of the source.

This one is certainly a stinker for the ages... A kind of cowardly mangling of history and present events in the context of gullibility to election rhetoric. So a reality TV host wins a presidential election. I've seen more offensive things, sad to say. And after all these terrible offensive things, this one brings a measure of comedic relief. Some good with the bad for a change.

Thanks for the link, Dana. It goes directly to the point:

Trump won the Presidency by gas light. His rise to power has awakened a force of bigotry by condoning and encouraging hatred, but also by normalizing deception. Civil rights are now on trial, though before we can fight to reassert the march toward equality, we must regain control of the truth. If that seems melodramatic, I would encourage you to dump a bucket of ice over your head while listening to “Duel of the Fates." Donald Trump is our President now; it’s time to wake up.

With Trump in charge, it's not going to be easy to regain control of the truth.

That's the irony, Anon. Reality TV is about delusion, not reality.

Owen, I'm puzzled by your "Lest We Forget" title. I tend to associate the phrase with war vets and Remembrance Day. What were you intending?

I've done a good deal of fraud work in my career, Owen, and one learns to detect subtle signs that most con artists reveal, sometimes unknowingly. One of these is haste, a rush to make things happen before anyone can interfere.

I see this sort of rushed thinking in Trump's bizarre choices to staff his cabinet. Mike Pence, a Christian fundamentalist who believes that homosexuality is a curable disorder. Mike Flynn, national security, who has never met a conspiracy theory he didn't embrace. Linda "kick him in the nuts" McMahon to head the Small Business Administration. Ben Carson to lead HUD. Rex Tillerson as Secretary of State. Scott Pruitt to dismember the Environmental Protection Agency. Rick Perry as Energy Secretary. The trio of Goldman Sachs execs and the billionaires too.

What does this convey other than the fact that Trump has totally betrayed the Gullibillies stupid enough to swallow his promises and vote for him? To me the message is that he wants to institutionalize Social Darwinism in America on a scale never before seen. And he's going about it in a way that eerily resembles what you might expect from a con man or a sneak thief.

If only I could reincarnate two people. One would be Charles Dickens. The other - maybe, just maybe, Lee Harvey Oswald.

If there's one characteristic which marks all of Trump's cabinet selections, Mound, it's that all of them -- like Trump -- know nothing about the jobs they are about to take on. I've heard Trump supporters claim that these people know how to get things done. But for whom? When the folks who voted for Trump discover that they bought into a massive fraud, they'll take to the streets. Trump is sowing the seeds of revolution. But it won't be the kind of revolution he envisages.

Who has the keys to Jack Ruby's getaway car? It's right where he left it.

And you can bet that somebody will always be looking for the keys, John.

The CIA is "sure" the Russians gerrymandered the US election, you say, but refuses to elaborate. Of course, how convenient - it's a secret. Heard it over and over again these past few days. Do you actually believe the CIA and its captive WaPo reporter (an idiot who was on The Current CBC Radio today), and if so why? They've made a habit of this kind of BS from Day 1 in 1945.

And what exactly could the Russians have actually done if the vote count was correct? Where every state runs its own voting booths in a national election, with amateurish flair and technical incompetence? You'd need armies of Russian programmers to screw that mess up even further than it is. It's just not believable.

These CIA musings are a load of rubbish, from a organization responsible for funding ISIS, overthrowing foreign governments and generally swaggering around the world making it safe to rip off other countries' resources on the cheap (except for millions of civilian deaths but who cares about them, right?).

This is the CIA seeing its foreign interventions possibly curtailed by Trump and dreaming up horsemanure to stoke a fake fire using the economically weak Russian state as the backboard, while the FBI, ever jealous about the CIA's growth, is bureaucratically in competition against them for budgets. They despise each other. CIA - Democrats. FBI- Republicans. In general. And Russia, desperate to still be thought of as a great power while its economy turns to rubble under sanctions, basks in the idea that the US still thinks them important enough to be held up as a nefarious (paper) tiger.

I don't believe any of these CIA "revelations" without proof. It's bureaucratic manoeuvring with high stakes. No more but no less dangerous for it. Now, when Trump pisses off the Chinese again, we'd all better put on our lead underwear, because China won't take any BS from the USA any more. Not one bit. They don't see why they should have to.

It's not just the Washington Post that is carrying this story, Anon. The New York Times is also looking into it. And David Sanger has a pretty good track record. Sanger reports that, when it comes to this kind of thing, Russia also has a track record. Some old CIA hands -- like Ray McGovern -- claim that the info came from inside the U.S. and was leaked.

John Podesta has asked that the information be made public. Perhaps -- like Comey's intervention -- there will be nothing there. But it's precisely because of Comey's intervention in the last days of the election -- something that was contrary to Department of Justice guidelines -- that citizens should see the information before Trump assumes office. With Clinton leading by two and a half million votes, the CIA report cannot be dismissed. If the situation was reversed, Trump's people would be rioting.