Tweetie Pie In The White House 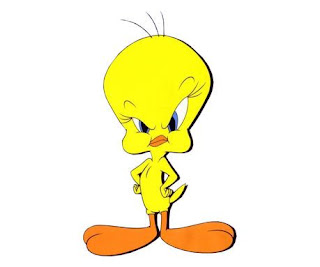 Donald Trump's communications strategy is simple: demonize the press and communicate through Twitter. Tweetie Pie will soon leave his golden cage and move to the White House. And, while Trump really is a cartoon, that development is no joke -- because journalists and journalism are under a great deal of financial pressure these days. Michael Harris writes:

Dying democracies and a dying free press are getting to be a universal phenomenon — and the guys who are driving the process are cultists like Donald Trump — on both the left and the right.

All politicians lie, but it usually takes awhile to catch them out. Bill on Monica, the elder Bush on new taxes, Nixon on … pretty much everything. But according to PolitiFact, 78 per cent of the statements made by Donald Trump are either false, grossly false, or pants-on-fire lies. He doesn’t even seem to care if Americans know he is lying, he lies anyway.

So it is in Trump's self interest to destroy the free press. In that regard, he is a lot like Stephen Harper:

For years in Canada, former PM Stephen Harper told whopper after whopper. He seemed to think that whatever he said became fact, especially if he said it enough times. Lies about the F-35, the health of the economy, regulating the energy sector, the environment, and global affairs — Canadians got them all in a steady stream of mendacity.

Like Trump, Harper despised the check and balance of a free press. That’s because it represented the most powerful alternative source of information to the government that existed — one capable of going behind his bully pulpit, his misrepresentations and lies and exposing them, as was eventually done on the true costs of the F-35 stealth fighter. So Harper avoided press conferences, and interviews, and even created a weekly news show where he reported on himself at the taxpayers’ expense.


We've seen this cartoon before. Tweetie Pie was a bad joke.

Image: Quotesgram
Posted by Owen Gray at 7:59 am

Email ThisBlogThis!Share to TwitterShare to FacebookShare to Pinterest
Labels: Trump And The Press

The F35 infallable single engine. No one blinked.

That one really was a whopper, Steve.

Were Harper still in power, Owen, I suspect he would get along famously with the reality-show star turned president.

These two birds would find common cause, Lorne.

Sure wish the media would call out this photo-op twit was have lodged in Victoria who doesn't even think she needs a Fall session to deal with all the problems that abound in bountiful, beautiful, full of well paying jobs in BC.

Something tells me her hubris will eventually catch up with her, Lulymay.

But without the national exposure of our captured and non existing investigative news media in BC im afraid it will be same old same old. The chum of scandal is so thick in the waters of the BC Neo-Liberal party on every level all the way up to the perpetually investigated premier
but in BC we have no sharks. At best we have trained seals on the benches and in the press waiting for their turn for fish heads to be tossed into their gaping maws. Can you really be impartial when your wife works for the government? Can you be impartial when your sons and daughters work for the government? Is it conflicting when the conflict commissioner's son works for the person you are investigating and you don't recuse yourself ? When the government has a farm team media bullpen does that news outlet deserve more scrutiny of its truthiness ? Thank you Colbert. Donald Trump is going to smash the media in the face Christy Trump and the Neo-Liberal party of BC co-opted ours long ago. Hey that means we were first at something after all.

A truly sad state of affairs, Jason. Apparently, everyone's palm can be greased.