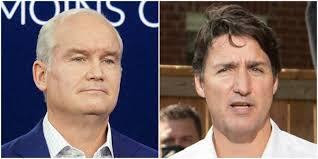 Canadian Conservatives are an ornery bunch. Robin Sears writes that it's always been hard to get them all to sing out of the same hymnal:

Since the dawn of Confederation, Canadian conservatives can point to only three periods of undisputed political success, in government.: Sir John A. Macdonald, 18 years; Brian Mulroney, nine years; and Stephen Harper nearly 10 years.

Some would want to add Robert Borden, R.B. Bennett, and Dief to the list of successes, but the first almost split the country over conscription, Bennett badly bungled the Depression, and John Diefenbaker’s shambolic governing style squandered the largest political majority ever won.

While each of the top three Tory administrations achieved great political and some policy success, they each ended in massive defeats and serious risk of party meltdown.

Say what you want about the Liberals, but when to comes to party management, they hold things together:

Liberals are the standouts in managing leadership, party and government for nearly two thirds of the years since Confederation. Why? For most of the period of Liberal success, one could argue that the values of Canadian conservatives were far closer to those of most English Canadian voters, and even to a substantial portion of Quebec.

Indeed, the Liberals were whispered about by their Tory opponents across Canada, as being in thrall to Quebec, the Catholic Church, and corrupt city bosses and business leaders both in Quebec, Ontario and Vancouver. The slurs were not entirely made up.

And so, once again, the Tories are on the verge of going to war with each other. They would do well to take a hard look at the Libs and the Dippers:

The Conservatives are the sole Canadian political family that does not seem to understand the devastating cost of being seen to be a squabbling collection of bitterly opposed factions. The NDP and the Liberals have had their internal splits, but rarely. The essentiality of public party unity can be summed up in the streeter reporters have collected for generations, “Well, if she can’t even hold her own party together, why in God’s name would we put the future of Canada in her hands…?”

The Liberals have had their bloody moments:

Curiously, having governed for much of Canada’s history by placing party unity and loyalty over principle and policy, as the iron law of Canadian Liberalism, the Liberal Party once fell into the blackhole of bloody and debilitating civil war, shortly after John Turner’s defeat by Mulroney. Their party-wrecking foolishness only died down after Paul Martin’s self-inflicted defeat a generation later.

But with the return to party unity, came the return of party arrogance. And that -- in a nutshell -- is the difference between the two parties -- Disunity and Arrogance.

Email ThisBlogThis!Share to TwitterShare to FacebookShare to Pinterest
Labels: The Difference Between Canadian Conservatives and Liberals

Of course, the danger to the rest of us in the way that the Liberals run their party is that we could end up with a superficial pinhead pretending to run the country.


Harper expunged from the Conservative ranks whatever vestiges of a progressive element existed. Mackay was his Quisling. Mulroney was compliant. Only Joe Clark and a small following walked. Yet Harper wasn't quite as successful as he imagined. In 2015 a number of card-carrying CPC members, some I've known for decades, concluded he'd gone too far and either didn't vote or cast their ballots for Justin Trudeau.

We see in the States today an emerging dichotomy of rural Republicans and urban Democrats. In the flyover states that hands control to the Republicans that they use to dominate the Senate. In Canada, the Tories have bested the Trudeau Liberals on share of popular vote in the last two elections yet Conservatives keep taking far fewer seats.

Kinsella argues that ideology only matters in election campaigns. Once the votes are counted there's little sunlight between Liberal and Conservative. In other words, the center holds.

What concerns me is the radicalization of politics in our country, a fragmentation that creates opportunity for the anti-immigrant, anti-vaxx, anti-climate crisis tropes, that now drive much of the GOP support to spread into Canada.

There has been a growing number of op-eds in the US media suggesting the Repugs will retake the Senate in next year's mid-terms and the other branches of government in 2024, ushering in at least 10 years of Democrats in minority. Biden has been successful in reversing a number of Trump's excesses but imagine what a unified Republican Congress under the leadership of a "vindicted" Trump presidency would inflict on the US. Among other things it could unravel the wobbly global consensus on averting climate catastrophe or be the final nail in the coffin of the Atlantic convention. Canada wouldn't stand a chance of remaining aloof to that sort of thing.

That's another familiar criticism of the Liberals, John -- all hat and no cattle.

Living along the American border has always been problematic, Mound. It has robbed many of us of a good night's sleep.