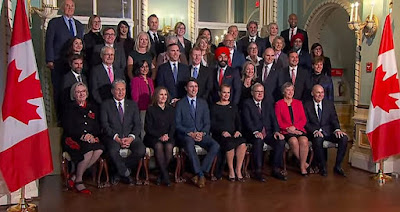 Justin Trudeau will introduce his new cabinet this week. Susan Delacourt writes it will answer a big question: Did the election change Justin's perspective?

Elizabeth May was one of those leaders who met Trudeau this week by virtue of her status as the Green party’s leader in the Commons. Of all the opposition leaders in the House, she knows Trudeau the best — they sat beside each other in the back rows when the Liberals languished as the third party in the chamber.

With that in mind, I asked May this week whether she got the impression during her half-hour conversation with him that Trudeau had been changed by the election, or whether she expected him to govern differently in this third term.

One of the big portfolios is going to be the environment:

Jonathan Wilkinson, the current environment minister, has generally drawn good reviews for the tone he’s struck since assuming the job after the 2019 election. But May and others believe that Trudeau could send a powerful signal by putting Steven Guilbeault on the job. Guilbeault was a prominent environmental activist before he was lured into the Liberal fold and could well be a part of the greening of cabinet if Trudeau is doing an outward-looking shuffle.

There are other big portfolios:

Any big moves on environment, health, foreign affairs and intergovernmental relations would demonstrate that Trudeau is trying to adjust his cabinet as he did after the Trump and Ford victories — to react to events not totally within his government’s control.

And then there is the matter of filling the portfolios of defeated ministers:

Other changes in the cabinet, at defence or to fill vacancies left by defeated ministers (status of women, fisheries and seniors) are more motivated by internal problems within the Trudeau government.

We'll have a better idea of what Justin is thinking about on Tuesday -- when he introduces the new crew.

Chretien takes the Dauphin to the woodshed

I saw that interview, Mound. There's a great deal to be said for experience.

What the petit gar should have said was apres moi le deluge. Three failed leaders and three lost elections with the old guard. The order of the Big Boot was the only way for the libs to win an election .

Chretien's musings are weak tea indeed but he is correct about Jr. Trudeau. That he was never a cabinet minister let alone a Parliamentary Secretary has hobbled his PMship.

About the only enviro-related comment from this guy as a cabinet minister to make it into the news is a tortured defense of TMX wrapped in a tortured defense of the current 'environment minister'.
"“What Jonathan is saying is: ‘The project is here, we are not going to rewrite history, let’s use this money to invest it in solutions,’” defends the one who has never hidden his disagreement with the government on the matter."

Those who followed Chretien didn't have the royal jelly, rumley. And they didn't have Chretien's common touch.

May obviously has her disagreements with Trudeau, PoV. We'll see if Justin takes her advice.

The new crew; same as the old crew with different names.
Much like reading Canada's "national " newspapers that all have the same message.

It may be down right entertaining to see the new cabinet.

I do like the current Minister for the military, but he has not been able to clean up the sexual assault, rape, etc. issues. Its time for a change. Perhaps he can give that portfolio to Freeland and let her take care of things. Of course she has been a tad busy with her other work, Deputy P.M. Finance Minister and Inter governmental affairs. It might be time to send a message to all those boys in the military and have a woman be the Cabinet Minister for Defense.

That may be true, TB. But we live in a time when the same old won't get us through what we face.

A woman defence minister would be a really interesting change, e.a.f.