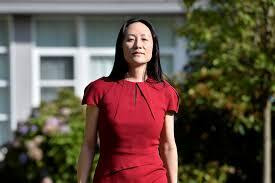 As Canada, the United States and China battled over Meng Wanzhow's extradition, her company -- Huawei -- underwent a reversal of fortune. David Olive writes:

Huawei has always insisted that it is not influenced by Beijing. But in the wake of China’s hostage diplomacy, hardly anyone not on Huawei’s payroll believes that.

The company’s global image as a potential menace is dragging Huawei down. Its win-at-all-costs drive has long been described in the industry as a “culture of wolves.”

The privately-held Huawei that Meng, 54, is poised to take over, as company founder and CEO Ren Zhengfei’s daughter and heir apparent, is now a turnaround case.

During the lengthy imprisonment of the two Michaels, several of the world’s biggest economies banned Huawei equipment from their nascent fifth-generation (5G) telecom networks.

Last year, the U.S. severed Huawei from its supply of critical U.S.-designed components for its networking gear and its smartphones. Huawei was also banned from working with Google, Facebook and other U.S. suppliers of smartphone software.

Huawei was further impaired when it was cut off last year by Taiwan Semiconductor Manufacturing Co., the world’s biggest chipmaker, under U.S. and European pressure.

Huawei’s chief competitors in telecom networking equipment are Sweden’s Ericsson AB and Finland’s Nokia Corp. The intransigence of Beijing on the issue of the two Michaels provided a lengthy period for Ericsson and Nokia to close the gap between themselves and Huawei in quality and pricing.

As China and Canada battled over the fates of three people, Huawei went down the tubes.

Email ThisBlogThis!Share to TwitterShare to FacebookShare to Pinterest
Labels: Huawei

What goes around comes around, Mound.

This ones for you Mound

Everything about Trump is a farce, TB. Unfortunately, it's a deadly farce.