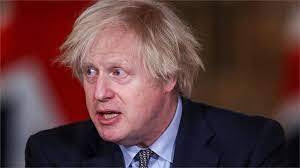 Yesterday, I wrote that some Republicans are playing dumb because it gives them a perceived political advantage -- until it doesn't. Britain has its own version of feckless Republicans. Currently, there are not enough truck drivers  -- many of whom come from the continent -- to drive the trucks which supply British filling stations. Rafael Behr writes:

The prime minister’s education, upbringing and professional experience afforded him lavish exposure to European cultures and global institutions. He can speak French properly if he needs to. He is a true cosmopolitan in every respect apart from the political posture he found expedient to adopt in pursuit of power. One of the skills he brought to the Brexit project was a truly globalised perspective, which he deployed to draw the most cartoonish fantasies about Britain’s place in the world.

That combination of pompous internationalism and wilful parochialism is now official government doctrine. It has been expressed in various different voices at the Tory conference in Manchester. Liz Truss, newly promoted to foreign secretary, made a speech promising to build “a network of economic, diplomatic and security partnerships” with a list of allies that included Gulf autocracies but not the EU.

The following morning, David Frost, Brexit minister, described EU membership as a “long bad dream.” Significantly, Frost includes the treaty he negotiated with Brussels as part of the nightmare, which is why he does not feel bound to honour its terms. The man whose job should be restoring functional diplomacy across the Channel is instead trumpeting the “British Renaissance” that will be stimulated by severance of continental ties.

There is a price to be paid when leaders pay allegiance to ignorance. And that price is paid when things go wrong -- as they are now doing:

Perhaps Johnson has no choice but to present economic difficulties as temporary turbulence in the transition to a brighter future. He appears still to enjoy considerable benefit of the doubt in public opinion, or at least the chunk of it that wanted Brexit and is feeling no great pang of buyer’s remorse, nor much magnetic pull to Labour. In such conditions, riding out the storm with the usual tricks of bravado and bonhomie might be as good a plan as any. It depends how long the storm lasts, and what kind of stomach the prime minister has for choppy water. He is more showman than helmsman and the dying of applause will soon make him queasy.

As the weather turns increasingly grim, it will be interesting to see how long Bojo remains on the bridge.

Email ThisBlogThis!Share to TwitterShare to FacebookShare to Pinterest
Labels: Pandering To Ignorance

Who's going to remove BoJo? He may be a clown, but he has no firm positions and does what his plutocratic backers want. In many ways, he's Britain's Trump.

Even if he were removed by the party, the Tories are committed to Brexit and his replacement will follow suit. And don't count on a Labour government fixing things. Starmer has said he sees no case for rejoining the EU and even dropped his pledge to restart free movement. There will be no British Renaissance, just an acceleration of the empire's decline and fall.

The Brits are rearranging the deck chairs on the Titanic, Cap.

Starting with Thatcher, British politics is just like a long, boring disaster flick with different grades of villain and no heroes. The current Labour leader, (what's-his-name) is so bad he must be a Tory plant. ;-)

The UK, Canada & Australia, (Brit-style, parliamentary fptp fiefdoms) are seemingly doomed. The US system has the electoral-college and the crazy-senate features that renders their 'balance of power' ridiculous when a rump of States/people can control all branches.

Interesting that US House committees are among the most effective and independent judicial bodies anywhere. (I believe that's the reason 75% of the worlds' mining companies are headquartered in Canada where parliamentary committees have little effect beyond parochial politics.)

It is race race to the bottom to see which of the five eyes fails first/worst. Indeed Bojo & crew seem to be winning atm.

They certainly don't represent the British Empire at its zenith, PoV.