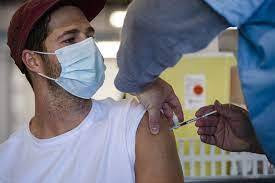 Bruce Arthur has been unrelenting in his criticism of Ontario's COVID response. Now we're almost there he writes:

The pandemic that has upended the entire damned globe can effectively end, within its current parameters, if enough people get vaccinated. That’s it. Canada has so many vaccines it had to pause deliveries. In Ontario, 80.7 per cent of all eligible people had two doses as of Wednesday morning, and 86.1 per cent had at least one.

But there's still more to do:

It’s great but it’s not enough, not if you want to get to 90 per cent of all Ontarians to protect against Delta. Even once Pfizer is approved for ages 5-11, which will hopefully happen in the next eight weeks or so, that is another million Ontarians, more or less. To get to 90 per cent of the 5+ population requires another million people after that. And currently Ontario is only delivering about 40,000 single doses per day.

So now we are in the last miles and they’re hard, and even as Ontario keeps a fourth wave under a spooky sort of control, the hospitals are already teetering. Imagine what they look like if a COVID wave rises, along with any other respiratory cycle. They’re fragile.

Which is just another reason Ontario needs to overcome its approach that vaccination will take care of itself, and the latent implication that anti-vaxxers need to be overly accommodated. We need vaccine mandates. You can carve out an exception for people willing to endure the safety-creating inconvenience of daily rapid tests. That would allow the possibility of education to work, and it wouldn’t be fun,

Otherwise, make it all but absolutely mandatory: for health care, for long-term care, for teachers, for cops, maybe for restaurants and bars and nightclubs, and for the transit workers whose unions foolishly stood next to disgraced crank MPP Roman Baber, before one sprinted the other way in an admirable bit of comedy.

You need a driver's licence to drive a car. You need to be vaccinated to get around and go places. It's that simple.

There's one very important source of spread, and source of vaccine resistance, that Arthur misses - churches. There are significant pockets of people who won't get vaccinated because some crackpot pastor has told them to trust in Jesus. Vaccine mandates need to apply to churches too, with no special exceptions. Hit these pastors where it hurts, in the pocketbook.

Despite rumours to the contrary, Cap, being "washed in the blood of the lamb" is not a vaccination against COVID.

What good is a disaster if you don't learn from it?

Covid 19 has been a powerful learning opportunity but we have done so much for so long to avoid its lessons even as the pandemic exacted such terrible costs. Nothing illustrates this more than the mess Alberta has created for itself.

From feckless politicians to the outsized influence of the deluded fringe how have we taken this experience to better prepare us for the next crisis?

We were lucky this time. Covid came as a standalone crisis. Yet we're told that the future may see a cascade of two or three crises arriving simultaneously or else overlapping. What are we going to do then?

I have long dismissed talk among climate science types that we may need some measure of authoritarian governance to cope with future challenges because, lord knows, we don't have the degree of social cohesion required to respond collectively. We may have to enforce some sort of quid pro quo between rights and responsibilities. Surely there are things we can do in the interim so as to avoid the need for strong measures after the crisis falls into our laps.

COVID has been an introduction to our brave new world, Mound. The response to the pandemic -- in so many cases -- has been a lesson in how not to function in this new world.

Despite rumours to the contrary, Cap, being "washed in the blood of the lamb" is not a vaccination against COVID.

It does not? What am I going to do with that lamb I just parked in the bark yard? Oh well,I supose there is always lamb curry.

Governments used to spend a lot of money on combating bigotry and encouraging national unity. See this Frank Sinatra PSA from the early 1950s for example: https://youtu.be/ovwHkb1wEfU

It may strike modern viewers as corny propaganda, but maybe we need some of that to combat incipient fascism.

Ayn Rand is too much with us, Cap. Although it's ironic that, a few years later, Albert Maltz -- who wrote the short screenplay -- was sent to prison for refusing to name names to Joseph McCarthy.

Cap….Can you tell me when are Roman Catholic Priests called Pastors? Actually nowhere in the Bible does it ever mention the word “Pastor”. It is a title used by Evangelicals and since it is they who refuse to live by pandemic protocols, they are the people who are causing a lot of the problems with conspiracy theories and other issues such as fighting for rights” which I might add have not been taken away at all. Perhaps the writer may not have wanted to mention this problem by name. You are correct with your suggestion. Just saying. Anyong

Pastor is the usual title in evangelical and Mennonite churches, and it's these groups that have resisted Covid measures to date. As workplace mandates kick in, I know several family physicians who have been getting requests for medical exemptions from their evangelical patients. One patient threw a fit when denied an exemption, saying "I don't need a vaccine, I'm a Christian." These are the groups that are vectors of community spread and that need a kick in the pants to get vaccinated. Mandating that all churches check vaccine passports will affect them the most, without unlawfully targeting them.