He Can't Do That 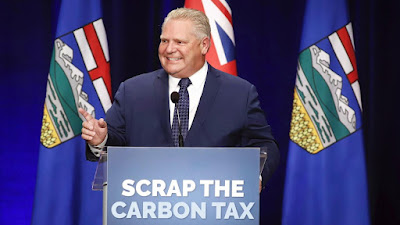 I wrote earlier this week about David Card, who -- along with two other economists -- was awarded this year's Nobel Prize in economics. Card was congratulated immediately by Prime Minister Trudeau and Ontario Opposition Leader Andrea Horvath. But there hasn't been a peep from Ontario premier Doug Ford -- which Martin Regg Cohn writes, is a little strange:

After all, Ford is quick to boast about the province’s wealth of world-beating human talent. Is not a Nobel Prize a valid proof point, or personal vindication, for a premier who tells the world that our classrooms produce world-class graduates?

Educated at Queen’s University, born and raised near Guelph (not unlike another renowned economist, the late John Kenneth Galbraith), Card has been praised in every quarter this week. Yet he remains unheralded at Queen’s Park.

Why? No one is sure. But perhaps Ford's silence has something to do about Card's research into the minimum wage -- which concluded that raising the minimum wage did little to increase or decrease the total number of jobs. That's not the conclusion Ford reached:

Upon taking power in mid-2018, the premier promptly cancelled a scheduled increase in the minimum wage to $15 an hour and imposed a freeze for the next two-and-a-half years (he also cut two paid sick days). When the freeze expired, the rate increased by a paltry 25 cents to catch up with inflation last year, and another 10 cents this year.

In fact, employment increased steadily and the unemployment rate declined to record low levels after the last Liberal government jacked up the minimum wage from $11.40 to $14 an hour. That’s because higher wages can reduce turnover and increase productivity, as employers are discovering amid today’s mid-pandemic labour shortages.

Still, Ford clings to his own idiosyncratic economic compass. Detailing his vision in 2019, he resolved to “ring the warning bell that the risk of a carbon-tax recession is very real.”

Never happened — Ontario’s recession came from COVID-19, not carbon. But on Friday, Ford was back to his imaginary economy.

“The carbon tax is the single worst tax on the backs of Canadians that’s ever existed,” he told reporters. “I’m a strong believer in a different theory — put money back into people’s pockets. They’re going to be able to go out there and, you know, buy a refrigerator, do a renovation, go for dinner, so on, so forth. That’s what stimulates the economy.”

Forgetting for a moment his wilful distortion of the federal carbon levy — fully rebated to motorists, not retained by government — Ford’s musings on “what stimulates the economy” could be unintentionally instructive. Putting higher wages “back into people’s pockets” is precisely what underlies the minimum wage increases that lift all boats.

Praising Card would mean that Ford would have to ditch his economic delusions. And he can't do that.

Email ThisBlogThis!Share to TwitterShare to FacebookShare to Pinterest
Labels: Ford And Card

Ah yes, the old "putting money back into people's pockets" con, aka bribing people with their own money. The Cons love offering tax rebates: pay for your kids' organized sports, new windows or energy-efficient heater and get a tax rebate. If you don't have the money for those things, too bad so sad, you should work harder. It's just the same old conservative economics, making the rich richer and the poor poorer.

I expect as the next election grows nearer, Owen, we will see Ford returning fully to his true nature. His base and his business and developer friends will rally behind him.

And it's taken to be axiomatic, Cap. Only it isn't.

Ford tries hard to be a chameleon, Lorne. But he's not a good actor.

Have you ever wondered why just about every politician regardless of party affiliation has no idea of the cost of a litre of milk or block of cheese?

Politicians hire other people to look after those things, zoombats. But they claim to be "of the people."

"Have you ever wondered why just about every politician regardless of party affiliation has no idea of the cost of a litre of milk or block of cheese?"

Watching affluent Canadians shop, tapping their plastic w/o even looking at the amount, I'd expand the circle of folks you describes as being oblivious to everyday costs.

And as to Ford ignoring empiricist research? No surprise there. Ontario elected him to do exactly that. And he still leads in the polls fwiw.

Superstition and stupidity are on the rise, PoV.

. “I’m a strong believer in a different theory — put money back into people’s pockets.
Now I think that's unfair to Doug. The only thing is that Doug's idea of who people are and everyone else's idea are not quite the same. Doug relates very well to small and medium-sized businessmen and women such as himself. Why, in an interview last year he was almost in tears describing the plight of the poor business owners with their stores and factories closed. I think this was just after he refused to consider three days sick leave.

I do not think our premier actually considers normal workers to be human.