They'll All Be Gone 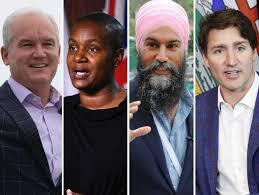 Michael Harris believes that none of our national party leaders will be around for the next election:

The leader most likely to go quickly is Annamie Paul. The bitter feuding inside the Green Party of Canada was big news for weeks before the election was called. Paul and the party’s national council racked up crushing legal bills fighting each other. In politics as in life, it never pays to air one’s dirty laundry in public.

The Greens did just that, so a fair question emerged for voters: how could you trust the GPC to manage the climate, the pandemic, and the economy when they couldn’t manage their own party?

Then there is Jagmeet Singh, who is likable but going nowhere:

Based on the results of the election, a very basic question has to be asked by the NDP rank-and-file. Has this leader reached the ceiling of support that he can reasonably be expected to attract to the party?

After spending $25 million on the campaign, he got virtually the same result as the party achieved in 2019. The NDP remains the fourth party in Parliament. Even when the NDP crashed and burned under Thomas Mulcair, it won 44 seats.

Voters clearly didn’t buy into Singh’s strategy of taking credit for things the Liberals actually did to support Canadians during the current pandemic.

Erin O'Toole tried to resurrect the Progressive Conservative Party. But the party's base was having none of it:

Conservative Leader Erin O’Toole is dead man walking after this election. His calculated transformation from a social conservative into Tommy Douglas was a giant bellyflop at the box-office.

No one believed him. He not only won fewer seats than the hapless Andrew Scheer, but he damaged the party brand. Shortly after O’Toole conceded defeat, the Campaign Life Coalition gave him the first of what will be many kicks to the meat pies over this botched election.

The CLC accused O’Toole of “alienating” the party’s social conservative base “with his shameless support for abortion, LGBT ideology, oppressive lockdowns and liberty-destroying passports.... By insulting the base, O’Toole drove CPC voters into the waiting arms of Maxime Bernier.”

Given the short shrift afforded Scheer when he failed to unseat Trudeau, there is no reason to believe that O’Toole will be around long. The party’s leadership review and election postmortem will do one of two things: give O’Toole a swift career-path change; or hopelessly divide the CPC into two, mutually exclusive camps — the social conservatives and the progressives.

Then there is Justin -- who, Harris believes, will be eased out of office:

Unlike the other leaders whose tenure is dubious at best, Trudeau will be eased, not forced, out. In politics, the shelf life for rock stars is the same as it is for garden variety politicians. Around about the eight to 10-year mark, you don’t sparkle anymore. You wear out your welcome as the baggage of governing mounts, the public grows tired of you, and the usually fatal urge for change sets in.

Trudeau didn’t deliver a majority, his popularity is waning, and he just put the country through an election that cost over half a billion dollars to deliver a kind of Groundhog Day of politics.

But the difference between Trudeau’s farewell tour and the other federal leaders is that his will be managed. In other words, around about the two-year mark of his latest mandate, he will decide that he wants to spend more time with his family, etc., etc., and the Liberal party will come up with a new face to try to dazzle, divert and seduce the public.

There will be lots of new faces the next time around. The question is: Will the parties change?

I mostly agree with Harris' analysis here, but I think the Cons had to move to the centre to stand a chance of winning. The truth is that the influence of the CLC is waning - their abortion rallies attract fewer people every year, as do their views on gay marriage. Canada's not going back to the 1960s on either issue, and catering to the fringe loonies in the CLC loses more votes in the mushy middle where most voters are.

Canada's political system is more like those in other Commonwealth countries and less like the one in the US. Although many Cons see themselves as "Republicans of the North," this is foreign to our system. Let the freaks and wingnuts go to the PPC - at best they'll be Canada's UKIP, at worst they'll become like Canadian Heritage. The Cons need to run like Tories if they want to win.

I agree, Cap, that moving to the center was a smart strategy. The problem is that the base of the Conservative Party isn't smart.

The truculent Ms. Paul is staging the most drawn out farewell in Canadian political history. It got so bad that Elizabeth May had to step in to refute Ms. Paul's endless bleating. The Green leader failed, for a third time, to win a seat in her chosen Toronto riding, finishing in fourth place at that.

Her every failure was blamed on racist, misogynist and/or anti-Semitic forces conspiring against her. May, it seems, had to intervene to try to prevent Paul from further damaging the party.

My view of the CPC is that selecting the least charismatic male party member they can find, will land them in the same seat count time and again, unless they can select someone who resonates with the public. Regardless of how they campaign, if the leader can't do it, no amount of good MP's out there on the ground will help. Perhaps the campaign life coalition can get behind Maxime and his merry band of racists and covidiots. I agree that Singh has reached a ceiling ensuring the NDP at 20-30 seats time and again- they didn't seem to have a platform this time around which was head scratching to say the least. As for the Liberals, right out of the gate Trudeau steps into another gaff with the September 30th debacle which unfortunately sidelined the very important aspects of Truth and Reconciliation, he should've known better. One more tone deaf move like that and he needs to go. The next two years I hope brings a female leader to the Liberal party as we are decades overdue for a female PM. BC Waterboy

Ms. Paul was simply a bad choice, Mound. Anyone who can cause that much division simply is unsuited for political leadership.

I'm sure Ms. Freeland would be ready to step into the breach, waterboy.

Trudeau won’t be going anywhere until after the next election. As for Sep.30th, the rightwing MSM made it all about Trudeau where he tried to keep a low profile so that the day could be about Trust & Reconciliation and Canada’s First Nations. Was there a single, insightful article/column about that anywhere?

He didn't have to put on a big show, UU. But for someone who touted Truth and Reconciliation, he should have been at the celebration in Ottawa. All he had to do was delay his vacation by one day.

Selecting from the political menu
the general candidate
has about twice as many handicaps as positive attributes
or
as my better half moans
"Out of all of Canada those are our best alternatives?"

Representative "meatsack" democracy won't be resolved by proportional representation or any other system that takes away your voice and gives it to another for 4 years.

The pathetic response that the system is imperfect but it is the best that there is ... is a basic acquiescence to a lack of imagination or lack knowledge.

Even with 4 fresh faces it will still be the same steaming pile of crap mismanaged in the same way.

An interesting read, Owen, but I don't think that Jagmeet Singh will be going anywhere soon. I'm not sure why they didn't get more seats, but the NDP, with the exception of Thomas Mulcair, has a history of sticking with a leader longer than the other parties. And who knows? If Singh can use whatever leverage he has in the next Parliament to good effect, perhaps he really will make an impression on the electorate.

On the Greens issue..
https://canadiandimension.com/articles/view/media-ignore-politics-behind-green-leaders-demise

I don't know what planet UU hails from but strolling Tofino's Long Beach is a shit poor place if you're looking to maintain a low profile. The prime minister lives in Ottawa. His riding is in Quebec. I live on Vancouver Island. Trudeau spends more time cavorting on Long Beach than anyone around here I know.

The faces change but so much remains the same, lungta. You're right. We lack the imagination we need to make things better.

Thanks for the link, TB. May also faced a rebellion over party policy toward Israel. For the Greens, Israel appears to be a make-or-break issue.

Truth and Reconciliation - who in the MSM discussed it on Sep.30?

is a Trudeau-hater in any way like an America-hater?

Good question, John. I'd like to think there's a difference.

I'm tired of these idiots who smear anyone critical of this prime minister as a "Trudeau hater." There's a rather pathetic childishness in their whinging.