Worshiping At The Altar of Greed 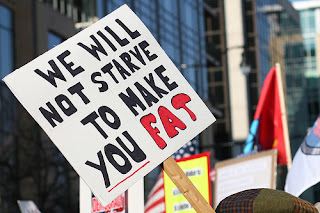 Modern conservatives have worked very hard to make Greed sound reasonable. Thus, when Tim Hudak released his latest policy proposal last week, it was wrapped in the language of "reason." Entitled "Path to Prosperity: Flexible Labour Markets," Hudak proposed ditching the Rand Formula and transforming Ontario into a "right to work" province: "No clauses in any provincial legislation, regulation or collective agreement should require a worker to become a member of a union or pay union dues as a condition of employment," he proclaimed.

In effect, Hudak's proposal would defund unions and the result would be what exists in 23 of the United States. Hudak is betting that jobs would come to Ontario because wages would go down.

Much has been written since Hudak released his proposal. The most trenchant  and -- not surprisingly -- intelligent response comes from Ed Broadbent. He begins by reminding his readers that Canada has signed two international agreements:

These international treaties affirm that unions are an important means for workers to exercise democratic checks on power.

For, in the end, Hudak's proposal -- like those of his federal brethren  -- is about removing impediments to oligarchy. "In democratic societies," Broadbent writes,

there are two principal arenas of non-violent conflict over power: the state and the workplace. Just as political democracy entails the right to select or reject one’s representatives and enables us to pursue, share and exercise power in the real world of free citizens, democracy in the workplace also requires that workers have their own representatives and some real power.

This check on power is what Canada’s Supreme Court decision in 2006 was all about. Chief Justice Beverley McLaughlin wrote in her decision that unions’ collective bargaining power bring “dignity, liberty and autonomy” to working people.


Both the federal and the provincial Conservatives are bought and paid for. And those who pull the strings believe that dignity, liberty and autonomy for working people get in their way. Such is indeed the case when you worship at the Altar of Greed.

Email ThisBlogThis!Share to TwitterShare to FacebookShare to Pinterest
Labels: Broadbent On Labour Unions

Yes, Harper certainly fits the greed part. He only wants, the very wealthy and the very poor. He wants no middle class, so the Unions have to go. When the Unions go, just watch what happens to wages, they will drop like a ton of bricks. Harper wants the poor, for a huge labor pool, just as Communist China has. Harper is a very great friend, of Communist China.

Harper thieves billions of our tax dollars to give to, banks, mines, oil and gas corporations and big business. Harper also gives them, huge tax reductions. This was seen on the House of Commons TV channel. Harper of course now does, his dastardly deeds behind closed doors. Harper steals from us, to give to the wealthiest outfits in the world.

Harper also permits his Ministers outrageous expense bills. Harper himself wasted $1 billion dollars, on a stupid fake lake. A riding was bought, for the $50 million dollars, spent on gazebos. Harper has a whopping $47 million dollar security bill. They say, that bill is going up. The more people that despise Harper, the more paranoid he gets.

It's clear, Anon, that Harper is no friend of labour. But he is a friend of the wealthy.

Who votes for that idiot? I hear he actually makes Mike Harris sound like a Rhodes Scholar.

Perhaps Hudak deserves some credit here, if he is proposing ditching the Rand formula. Harper would no doubt propose the Rand formula, keeping the name. He'd just have in mind Ayn Rand (or Rand Paul).

Before the last provincial election, thwap, Hudak started out with a substantial lead. Then he blew it.

He has a tendency to put his foot in his mouth. Perhaps this is more of the same.