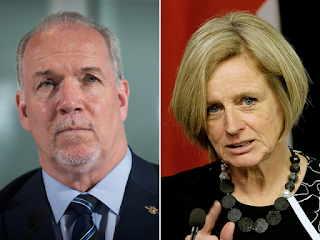 Justin Trudeau is caught between a pipeline and a hard place. Tim Harper writes:

For Trudeau, a major hit to his self-styled progressive climate change policy looms.

In essence, a prime minister who wants to be known as environmentally aware is touting an unpopular pipeline project as a means to combat climate change.

He has accused an NDP premier in B.C., who has formed a coalition with Green leader Andrew Weaver, of trying to “scuttle” a national climate change plan by blocking an increase in tanker traffic.

Trudeau has always tried to thread the needle on the balance between the economy and greenhouse gas targets, but it is getting more difficult.


Trudeau has said that he needed Rachel Notley on side to make his climate change policy work:

“It was always a question of, if we could move forward responsibly on the Kinder Morgan pipeline, then Alberta would be able to be as ambitious as we needed Alberta to be and get on with the national climate change plan... they were linked to each other.”

Politically, this is accurate. Without Notley in Alberta, Trudeau risks having his national climate plan unravel, and, at least, he will be fighting with Alberta, Saskatchewan, Manitoba and possibly Ontario as he imposes carbon pricing on resistant premiers.

But a shorthand rallying cry of “Save the planet, expand a pipeline,’’ is a difficult sell.


And that's just the point. Trudeau's charm makes him a good salesman. But what he is selling is a flawed policy.

Image: The National Post
Posted by Owen Gray at 9:14 am

Email ThisBlogThis!Share to TwitterShare to FacebookShare to Pinterest
Labels: The BC Alberta-Pipeline Impasse

And that's the point: JT is just a salesman, a front for the same people who messed up a decade of Harper government, and like many masters of salescraft, he broadcast a narrative that has nothing to do with the real business that he intends to accomplish while lulling his pigeons to sleep. This clash between narrative and program is, perhaps, the most jarring, but his whole infrastructure plan is a boon to banks and large corporate entities. All the social programs on the books are back-end loaded and depend on another Liberal mandate in 2019. It's utter flim-flammery.

As usual, Danneau, the Liberals campaigned from the left but are governing from the right.

Danneau's observations get to the heart of the matter, Owen. Unless one is content to go through life accepting government propaganda and being bedazzled by Justin's charm, one would be hard-pressed to reject his conclusions.

Charm can't erase facts, Lorne. But it's easy to forget them.


I have sensed the decline of liberalism in the Liberal Party since the Chretien era. Axworthy-grade progressivism was quietly but firmly expunged. Liberals still enjoy the conceit of imagining themselves and their party as progressive but that has come to be a term without meaning beyond 'ever so slightly to the left' of the Conservatives.

Trudeau is a fine study in affectation. He made that plain when he reneged on electoral reform. Kinder-Morgan is merely a continuation of his by now transparent posturing.

Stephen Harper's overarching goal was to shift Canada's political centre significantly to the right. Under the hapless Ignatieff, the Liberals trekked in Harper's footsteps followed not far behind by the Layton/Muclair NDP.

Trudeau's campaign was so successful because (a) Harper was by then damaged goods and (b) he spoke boldly about restoring progressivism and liberalism to his party. It was all carefully scripted bullshit of course and we didn't have to wait long to see the bold promises deflated.

His dishonesty is revealed in his oratory. He's a very hesitant speaker, blurting out phrases of a few words at a time, seemingly always in search of something suitable to add next. It's the sort of thing that you, as a career teacher, would have experienced almost constantly in some of your students. It strikes me as an indication that he doesn't believe what is coming out of his own mouth.

Justin has been a disappointment, Mound. During the last election, he seemed like the best alternative. We'll have to see what happens the next time around. The logical alternative is the NDP -- but they have yet to earn their bona fides.

.. this entire pinwheeling clusterfluck is really p-ing me off Owen.
We have exemplars who know their stuff.. and are barely heard..
and we have juvenile pricks a la Jason Kenney spewing froth.
Ms Notely is trying to stay alive politically..
and J Trudeau is talking out his arse for all he's worth..
Premier Horgan trying to keep a foot in all boats plus Weavers

I have been asking people if they know where their 'energy' originates
If it heats their home or fuels their car..
Most guess its 'oil' from Alberta..
and if pressed further they think its from the Tar Sands..

I try to keep the incredulity off my face..
With gentle prodding I ask further..
They want to preserve and indeed expand such Energy Security..
and what I ask do supertankers to Asia do to enhance such a scenario..

In a friendly way I inform..
Its natural gas from New York state that does that

There are times I begin to think I could tell them
that storks or unicorns deliver the natural gas
and get more belief..
The concept of fracking makes their eyes glaze over
or they become hostile when I suggest the drilling
goes down down down.. then turns sideways - goes horizontal

I swear I have tried explaining this stuff to Rhode scholars
and I see the dismissal in their eyes
It arrives with 60 secs.. I see it.. and I shut it down
Its like explaining how an automatic transmission works
.. well you see its like the wheels connect to axels..
the axels to the drive shaft.. and it is connected to
uh oh shut er down.. ya lost em

Curiosity is no longer seen as a virtue, sal. It costs too much.

the salamander said, "I swear I have tried explaining this stuff to Rhode scholars
and I see the dismissal in their eyes" Etc.

I endure similar trials. Ignorance about how basic stuff around us works is rife. So many people are quite deaf to it. I have spent years trying to explain that Rachael's pipe to tidewater will not be carrying just oil; the pipe is for dilbit, a much more toxic substance. Why can't they get it? Because Prime Ministers and Premiers call it oil.

Rick Mercer was able to convince Americans that Timbits can be used to keep reindeer out of Vancouver. I guess Canadians can be just as stupid.

My expereince, Toby, has been that stupidity knows no limitations.