Running For The Exits 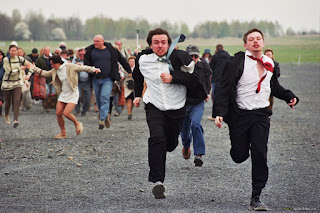 It seems that the Trump Administration loses -- or fires -- someone every week. Last week, it lost two staff members because of accusations of domestic abuse. Ezra Klein writes that there are three reasons what was once a trickle has now become and flood:

No one knows quite what he will do or say or want, and so staffers spend their days working on deals and plans that they know could be wrecked by a tweet or a late-night phone call or something the president saw on Fox & Friends.

Trump is also a difficult and disloyal boss who doesn’t listen when you brief him, doesn’t read the documents you prepare for him, and can’t correctly remember what you’ve told him. And if you anger him, he will turn on you in a meeting or, worse, in public. No one wants to end up like Steve Bannon or Jeff Sessions. And none of this is a secret to the men and women who might be next in line for these jobs.


2. Incoherence at the top leads to constant infighting below:

Trump is uninterested in core questions of governance, has never resolved the ideological tensions in his administration, and is heavily influenced by whoever gets to him last. The result is an ongoing battle, which plays out through both bureaucratic maneuvering and constant leaking, between the various ideological factions of the administration.

This makes the Trump White House a particularly dangerous place to work. All of the factions are constantly maneuvering to consolidate or regain influence by deposing members of rival factions.

The third zone of dysfunction is the Trump administration’s haphazard staffing and vetting procedures.

Similarly, the Trump White House is mired in investigations circling the activities of Trump’s motley, amateurish campaign crew — Donald Trump Jr. and Carter Page and George Papadopoulos and Michael Flynn and Jared Kushner would have been nowhere near the center of a normal presidential operation — and those investigations are discouraging new staffers from joining the administration because they don’t want the hefty legal fees of getting caught in the Russia investigation or whatever scandal may erupt next.


Those who know Trump or have worked for him say that he doesn't do due diligence. He makes decisions with his gut and flies by the seat of his pants.

It should be no surprise that his administration is a shambles. Reports are that his staff is running for the exits.

.. if you can pay in cash Owen, I can rewrite you post.. but I recognize its perceptiveness.. Perhaps I just have a more merciless perspective and less concern.

The Trump systemic failure arrived.. & it arrived like massive cardiac arrest, not totally fatal.. after some sort of intervention it is now just tachycardia.. ie heart failure that comes n goes as it pleases, usually via Twitter. Perhaps its more an aneuristic brain leak or swelling.. or just manifest mood disorder..

These things are hard to explain & dump
on family, stakeholders, friends & others.. Ol Donald is 'off his noodle' ..AGAIN..

Loses resonance when he rails daily from the golf cart.. or after missing a 2 footer after he threw it from a sand trap, at the hole or General Kelly delivers a head slap.. and yells 'Donald, wake up.. hello, earth to Donald ! ! And General Kelly.. is off panet, perhaps on Mars

We are heading to uh..
Well if I knew the heading, I'd pull out the related map

There is no map to complete & utter fantasy ..

Your comment is very perceptive, sal. There is no road map. And we don't know the final destination.


Trump has surrounded himself with felons, grifters, thugs and organized criminals for decades. He seems to revel in their 'bad boy' shtick. He sets the bar for the people he brings into his administration. Michael Wolff reveals in "Fire and Fury" how caught unaware and unprepared Trump and his campaign were when he won. They expected to lose. They wanted to lose. They, including Trump, were all prepared to springboard from electoral failure to ever greater success back in the private sector. That's why Kushner filed such an incomplete disclosure statement. He didn't disclose his meetings with sketchy foreign contacts because he figured the morning after the election no one would care. That's why Flynn was brought aboard.

I recall how, post-election, Obama was floored in his first sit down meeting with Trump. The Cheeto Benito figured that replacing Obama would be like the new CEO moving into the head office. All the staff would remain. Obama told Trump he'd have to find his own staff and asked Trump why would he even want Obama loyalists in sensitive positions in the White House. Amazing.

From what I read, Mound, Trump's candidacy was supposed to be an updated version of that old Robert Reford movie, The Candidate. Like Redford in the film -- after he had won -- Trump was presented with the problem, "What do we do now?"